What Is Acid Reflux?

This common problem is often treatable with some lifestyle changes

Acid reflux is a condition where the tube between the mouth and the stomach (the esophagus) is irritated by stomach acid or bile (a fluid used for digestion). It might also be called gastroesophageal reflux (GER).

It is a common problem that causes symptoms that include pain in the chest after eating which may get worse when lying down, regurgitation, problems swallowing, and the feeling of a “lump” in the throat.

Treatment for acid reflux might include making changes to lifestyle and using medications. When acid reflux occurs more than a few times a week, it may be a chronic condition called gastroesophageal reflux disease (GERD).

There are special muscles in the esophagus that allow food and liquid to pass through and down to the stomach and also prevent food from coming back up from the stomach into the mouth. These muscles are called sphincters.

The upper esophageal sphincter (UES) is at the top of the esophagus. This muscle can be voluntarily controlled during swallowing. It also helps prevent food and liquid from going down the windpipe or from coming back up from the esophagus.

The lower esophageal sphincter (LES) is at the bottom of the esophagus and at the opening to the stomach. This muscle can not be controlled voluntarily. It closes up to prevent food from coming up out of the stomach and back into the esophagus. When the LES becomes weakened, it might lead to acid reflux.﻿﻿

The signs and symptoms of acid reflux can include:﻿﻿

Why Acid Reflux Headaches Happen and What You Can Do

There are several different factors that may cause or contribute to the weakening of the LES and acid reflux. One potential cause is a hiatal hernia. There is a muscle that is between the chest and the abdomen, which is called the diaphragm. The esophagus passes through the diaphragm via a small opening that’s called the hiatus.

Other causes and contributing conditions to acid reflux include:

Some people will be able to self-diagnose acid reflux based on the symptoms. Making some changes to lifestyle or using over-the-counter medications may be helpful in treating symptoms. A healthcare provider may also help in making the diagnosis, usually based on a medical history and a physical exam.

Acid reflux usually doesn't require any tests. However, if it is happening more than a few times a week, making it a chronic condition, there might be a need for testing. There are some tests that might be done if acid reflux does become bothersome and may actually be GERD. These can include:﻿﻿

Treatment begins with changes in lifestyle and diet, but may also include medications.

In many cases, acid reflux can be treated with changes to lifestyle and diet. Some people may find it helpful to keep a food log or diary and include any signs or symptoms that occur after meals and at night. This can show if there are certain times of day when acid reflux is more likely to occur or if there are foods that seem to make the condition worse.

Other changes that may help in preventing acid reflux include:

Over-the-counter medications may also be used to treat occasional acid reflux. It's important to take only one type of medication to treat acid reflux at a time. It's a good idea to consult a physician on which type of acid reflux treatment to take. Some of the medications that might be used include:﻿﻿

Occasional heartburn and acid reflux should be discussed with a physician at a regular appointment. However, if reflux is happening more than a few times a week, that should prompt a visit to see a healthcare professional for diagnosis and treatment.

If there are severe symptoms such as vomiting that is forceful or won’t stop, vomiting bile or blood or what looks like coffee grounds, or problems swallowing or breathing, seek medical attention right away.

Acid reflux is common and can often be treated at home with some changes to diet and lifestyle. In some cases, over-the-counter medications may also be needed to help get symptoms under control. It’s important to note, however, that acid reflux is something that occurs on occasion.

If reflux is happening approximately two times a week, it is considered chronic. When that is the case, there may be a need for further testing and treatment for GERD. This is because GERD is associated with long-term effects that can be harmful.

Some of the medications that are used to treat acid reflux should only be used for short periods of time, so it’s important to get guidance from a physician if there’s a need to take these medications more than occasionally.

What’s more, chronic reflux can limit one’s quality of life and make basic activities like socializing and sleeping more difficult. There are now many potential treatments for acid reflux and for GERD that can help. 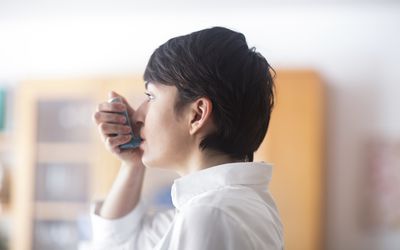