An accurate, early diagnosis of Alzheimer's disease allows appropriate treatment to begin sooner, which is why it's important to schedule an evaluation if you or someone you know is showing some of the signs and symptoms. The healthcare provider will do screening assessments as well as review symptoms and medical history, but may also consider imaging to rule out other possible explanations for what one is experiencing.

While you can't diagnose yourself or someone else with Alzheimer's disease, you can perform a clinically supported at-home check that may point to the possibility and give the practitioner useful information to use in their assessment.

Try not to jump to conclusions about the first sign of forgetfulness. It's normal, from time to time, to forget where you put your glasses or to bring back a library book by its due date. Alzheimer's is not a minor episode of forgetfulness, nor is it a sudden change in cognition; rather, it's a gradual progression of symptoms over time.

Keep track of symptoms over the course of a few months. Consider asking a trusted family member or friend for input as well. When calling to make an appointment with your healthcare provider, briefly share your observations and ask for an evaluation for Alzheimer's and other kinds of dementia. Bring the list of symptoms and any questions you can think of to your practitioner.

The online Self-Administered Gerocognitive Exam (SAGE) can be downloaded and taken at home. This self-screening dementia tool has been scientifically evaluated and has demonstrated good results in accurately identifying cognitive deficits. A key part of ensuring its accuracy is bringing it to your healthcare provider for scoring and interpretation rather than doing so yourself.

Any at-home screening test should be followed up with an assessment by a medical professional. There are many direct-to-consumer tests that are not scientifically validated and may give inaccurate results.

Different kinds of healthcare providers can diagnose Alzheimer's disease. You can make an appointment with your primary care doctor or seek out a specialist such as a psychologist, geriatric psychiatrist, neurologist, neuropsychiatrist, or geropsychiatrist.

Some communities have specific programs that specialize in Alzheimer's testing and diagnosing, so check with your local Alzheimer's Association chapter for recommendations.

The healthcare provider will ask you to tell them about the symptoms you've experienced to determine if they are consistent with the symptoms of Alzheimer's disease. If you are attending the appointment along with and out of concern for a loved one, you may be asked about what you've witnessed as well.

The practitioner will also likely ask if there are other diagnosed health conditions or any additional symptoms. If you're at a new healthcare provider's office, they may request that medical records be sent from your/your loved one's primary care physician ahead of time so that they have a full account of this information.

Additionally, family history for different kinds of dementia and health conditions will likely be reviewed, as well as any current medications (prescription or over-the-counter), vitamins, and supplements being taken.

A definitive diagnosis of Alzheimer's disease cannot be made until after death if and when a brain autopsy is conducted. A healthcare provider can, however, diagnose Alzheimer's with reasonable certainty by conducting several tests that can eliminate other causes of confusion and memory loss and by seeing how one's symptoms align with those of Alzheimer's.

The following are often considered when diagnosing Alzheimer's disease.

There are several screening tests to evaluate cognition, but one of the more common exams is the Mini Mental State Exam (MMSE). This exam tests different aspects of the ability of the brain, such as memory, calculation, orientation, and communication.

The clock-drawing test is often a part of other screening tests, such as some of the below. Simply drawing a clock with the numbers and hands set at a specific time can reveal problems with cognition.

Other tests done on those being evaluated include:

The Alzheimer's Disease Assessment Scale-Cognitive Subscale test (ADAS-Cog) is an 11-part test often used after diagnosis of Alzheimer's disease to assess the level of impairment. It focuses on attention, language, orientation, executive functioning, and memory skills.

Tests may also be given to caregivers and families. They include:

Some healthcare providers will order tests such as blood work or a urinalysis. These tests can screen for infections or other medical conditions that could hinder one's ability to think clearly. Infections can often cause increased confusion, especially in older adults, so it's important to eliminate these and other reversible conditions as a cause.

In the rare case that autosomal-dominant Alzheimer's disease is suspected of being present in the family, a genetic test is available.

Brain changes can also be observed through various imaging techniques, such as:

The diagnostic process should include an evaluation for reversible conditions that can mimic Alzheimer's disease. You or your loved one may fear that the symptoms are due to Alzheimer's when they could be the result of many other conditions, such as depression or delirium due to an infection that will improve with the right treatment.

Problems with memory may be diagnosed as mild cognitive impairment, in which the person has normal overall cognition and can still do their daily activities. There is a greater risk of dementia, but it is not inevitable.

Tests will also differentiate between Alzheimer's and other kinds of dementia such as:﻿﻿

Any significant, sudden change in someone's ability to think merits a call to a healthcare provider immediately, as this may be a sign of a treatable condition.

Seeking an explanation for symptoms that could indicate Alzheimer's can be daunting—and waiting for answers, nerve-wracking. But it's so important that you work to overcome these feelings and seek a diagnosis as early as possible. Finally having a name for one's condition can allow you some control over how the progression and effects of Alzheimer's disease are handled. And, in some ways, solving the mystery can offer some relief, though it may be paired with sadness. As you increase your understanding of Alzheimer's, you may also be able to more effectively cope with your feelings about the disease and its challenges.

How Alzheimer's Is Treated
12 Sources
Verywell Health uses only high-quality sources, including peer-reviewed studies, to support the facts within our articles. Read our editorial process to learn more about how we fact-check and keep our content accurate, reliable, and trustworthy.
Additional Reading 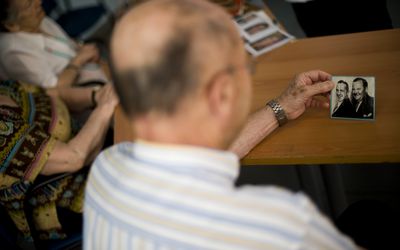