There are many different types of anemia, a condition in which there is a low number of red blood cells (RBCs) or a low hemoglobin concentration in the body. Hemoglobin is an iron-rich protein in the RBCs that binds to oxygen, transporting it to tissues throughout the body.

The types of anemia can be distinguished from each other with diagnostic tests, such as a complete blood count. And the treatment of anemia is tailored to the type.

Common symptoms associated with anemia include fatigue, shortness of breath, dizziness, rapid heartbeat, headache, feeling cold, and pale or yellowish skin.﻿﻿﻿﻿﻿ You can experience a combination of these symptoms, but you might not notice any symptoms of anemia.

Often, the condition is first detected with a blood test, especially if the anemia is mild.

Iron-deficiency anemia: The most common type of anemia, microcytic anemia (small RBCs), develops when you lack a sufficient amount of iron in your body to make normal amounts of RBCs. Typically, iron-deficiency anemia occurs due to blood loss or decreased iron absorption.

Vitamin-deficiency anemia: Low levels of vitamin B12 or folic acid in the body cause macrocytic anemia (enlarged RBCs) and low numbers of RBCs. Vitamin B12 deficiency often develops when this vitamin is not well-absorbed. Pernicious anemia is one of many causes of B12 deficiency.

Hemolytic anemia: Abnormal breakdown of red blood cells in the bloodstream or the spleen is usually associated with sickle cell anemia.. Other causes include an artificial heart valve, infection, or autoimmune disease.

Chronic inflammatory disease can cause both iron deficiency and anemia of chronic disease.

People who have arthritis, for example, often take a nonsteroidal anti-inflammatory drug (NSAID) as part of their treatment regimen. NSAIDs have been tied to an increased risk of gastrointestinal bleeding.﻿﻿﻿﻿﻿

Anemia of chronic disease can be stable. Generally, hemoglobin levels hover in a slightly lower than the normal range, not typically lower than 9.5 mg/dl.

With anemia of chronic disease, iron metabolism is altered. When inflammation is triggered by the immune system, less iron is absorbed by the body, free iron in the body is stored in liver cells, and the ferritin level in serum increases.

In both iron-deficiency anemia and anemia of chronic disease, serum iron is low. But there are some differences in blood tests that can help distinguish the conditions.

Total iron-binding capacity (TIBC): Transferrin, a protein that transports iron, is elevated in iron-deficiency anemia—a sign that the body needs more iron. The TIBC, an indirect measurement of transferrin, is usually high when iron stores are decreased and low when iron stores are elevated. TIBC is low or normal in anemia of chronic disease—a sign that there is enough iron but it is not readily available. In iron-deficiency anemia, TIBC is typically high, often in excess of 400 mcg/dl because iron stores are low.

Serum ferritin: This protein contains iron, and it should be low in iron deficiency anemia. Ferritin can be elevated in the presence of inflammation. With some chronic diseases, serum ferritin may be raised to normal levels, even if iron-deficiency anemia exists. 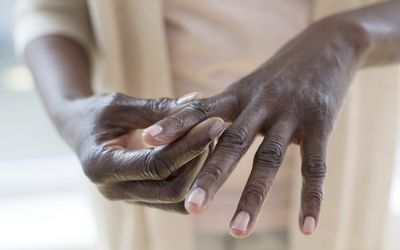