Mary Kugler, RN
Mary Kugler, RN, is a pediatric nurse whose specialty is caring for children with long-term or severe medical problems.
Learn about our editorial process
Medically reviewed by Douglas A. Nelson, MD

Diamond Blackfan anemia (DBA) is a rare blood disorder, usually diagnosed in infancy, in which the bone marrow does not make enough red blood cells to carry oxygen throughout the body. It is a potentially life-threatening condition that can cause severe anemia as well as physical abnormalities. There are estimated to be 25 to 35 new cases of DBA per year in North America.﻿﻿

The disorder is named for Dr. Louis Diamond and Dr. Kenneth Blackfan, who discovered and documented the first cases of the disease in the 1930s.﻿﻿ It require s ongoing medical management by a hematologist, with treatments ranging from steroid medications to stem cell transplants.﻿﻿

Other names for Diamond Blackfan anemia include:

Diamond Blackfan anemia is present at birth but can be difficult to identify. About one-half of children born with the disorder have physical defects such as hand deformities or heart defects but there is no clear set of standard signs indicating DBA.

The symptoms may also vary greatly, from very mild to severe and life-threatening. Because red blood cells carry oxygen throughout the body, a child with DBA may have symptoms related to a deficit of blood oxygen (anemia), including:

When physical anomalies are present, they may include: ﻿﻿

In addition, DBA may cause eye problems such as cataracts and glaucoma. The disorder also is strongly associated with myelodysplastic syndrome, another disorder in which the bone marrow does not make enough red blood cells, as well as with osteosarcoma (bone cancer), colon cancer, and leukemia.﻿﻿

The exact cause of DBA is unknown, but gene mutations in ribosomal protein genes are identified in 80% to 85% of cases.﻿﻿ A result of these types of mutations is that the blood-forming cells in the bone marrow self-destruct, leading to the anemia that is the hallmark of the disease.

No abnormal genes have been identified in the remaining 10% to 15% of patients.﻿﻿ In about 10% to 20% of cases, there is a family history of the disorder.

Diamond Blackfan anemia usually is diagnosed when a baby is 3 or 4 months old, although it is sometimes detected at birth, based on symptoms.﻿﻿ For example, a baby might be suspected of having anemia if they are always pale and become short of breath when taking a bottle or nursing.

Due to the fact that Diamond Blackfan anemia is extremely rare, and few physicians are familiar with it, it can take some time to arrive at a correct diagnosis.

Blood tests that are used to diagnose DBA include:

Genetic testing is used to look for the gene mutations that occur in the majority of people with DBA. A bone marrow sample (biopsy), removed under general anesthesia, may be done to determine if the amount of new red blood cells being created is low.

Two types of anemia that are similar to DBA may need to be ruled out in order to definitiveky diagnose the disease: One is aplastic anemia, which results in bone marrow failure. The other is Fanconi anemia, another rare inherited bone marrow failure syndrome characterized by congenital anomalies such as bone abnormalities, small head size, small genitalia, and abnormal pigmentation of the skin.

There is a range of treatment options for Diamond Blackfan anemia, including:

A steroid drug, usually prednisone, is the first-line treatment for DBA. About 80% of children with DBA will respond to this medication, which stimulates production of red blood cells. Children who respond to steroid treatment may have to take them for the rest of their lives; eventually 40% of patients are steroid dependent.

Steroids have side effects such as diabetes, glaucoma, bone weakening (osteopenia), and high blood pressure; in some cases, steroid medications will stop working.

If steroids don't work or must be taken in doses that are too high in order to work, transfusions of donated donated blood may be necessary. Some people need transfusions only when they have dips in hemoglobin while others may need chronic transfusion therapy, meaning regular treatments every four to six weeks, with 40% of patients becoming transfusion dependent.﻿﻿

A potential drawback of regular blood transfusions is the accumulation of too much iron. Normally, the body uses iron when making new red blood cells, but since someone with Diamond Blackfan anemia isn't making many cells, the iron builds up. Excessive iron in the blood can cause heart arrhythmias, congestive heart failure, cirrhosis, diabetes, and hypothyroidism, as well as other serious problems.﻿﻿

To remove the excess iron from the body, chelation therapy is necessary with one of two drugs approved for this purpose: Exjade (defarasirox) and Desferal (deferoxamine).﻿﻿

The only potential cure for Diamond Blackfan anemia is stem cell transplantation (SCT), in which defective bone marrow is replaced with healthy cells from a donor. ﻿﻿ The donor’s stem cells can be obtained from bone marrow, peripheral blood, or cord blood. This is a complicated medical procedure that requires several months in the hospital and is not without risks. The reward for a successful SCT is that the patient’s bone marrow should function normally and they will not need chronic blood transfusion therapy or steroid medication. It is usually reserved for people for whom steroid medications and blood transfusions don't help.

Learning a child has DBA can be upsetting, but people with the disorder can live long, healthy, active lives if they get good medical care and pursue a healthy lifestyle. Approximately 17% of those affected with DBA have a chance of going into spontaneous remission, which means no steroids or transfusions are required for six months or more. It is possible to go in and out of remission at any point.﻿﻿

Research continues to be done on potential treatments for DBA. The Diamond Blackfan Anemia Foundation can help those who are interested in participating in a clinical trial. 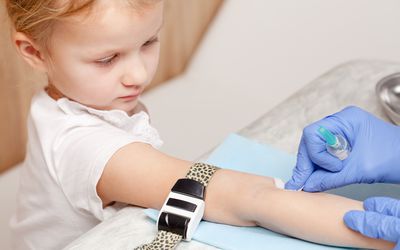