Bleeding Ulcers: Everything You Need to Know

Learn about our editorial process
Medically reviewed
Verywell Health articles are reviewed by board-certified physicians and healthcare professionals. These medical reviewers confirm the content is thorough and accurate, reflecting the latest evidence-based research. Content is reviewed before publication and upon substantial updates. Learn more.
by
Cristian Zanartu, MD

Peptic ulcer disease is a condition in which there are one or more sores (ulcers) in the stomach lining or in the lining of the first part of the small intestine (the duodenum). In some cases, an ulcer can bleed. The bleeding can be minimal or severe. Treatment can help with symptoms and eventually cause the ulcer to go away.

This article looks at the symptoms, causes, treatment, and complications of bleeding ulcers.

Minor ulcers may not cause any symptoms. But some potential symptoms of ulcers may include:

If an ulcer is bleeding, you may also experience:

Often, people don’t know they have a bleeding ulcer. They might have extreme fatigue or other symptoms of anemia (a low number of healthy red blood cells). The anemia may be diagnosed before the ulcer.

The pain from an ulcer tends to be dull and achy instead of sharp. It can last for hours or come and go.

When to Seek Medical Help

It’s important to see a healthcare provider if you’re experiencing several of the above-listed symptoms. An ulcer can lead to complications if left untreated.

Get emergency treatment if you:

Ulcers can happen for several reasons. Some of the most common causes are:

Most people with stomach ulcers have a Helicobacter pylori (H. pylori) infection present in their gut. However, not everyone with this type of bacteria will develop stomach ulcers.

This bacterium can damage the special mucous coating that protects the small intestine and stomach lining, allowing stomach acid to reach the lining and eat away at the tissue.

Frequently taking nonsteroidal anti-inflammatory drugs such as aspirin, Advil (ibuprofen), or Aleve (naproxen) can also elevate your risk of developing an ulcer.

While NSAIDs can help with pain, fever, and inflammation, they also reduce the natural mucous layer that protects the stomach from its own acid. This can lead to ulcers, especially if you take NSAIDs regularly.

A rare condition (Zollinger-Ellison syndrome) results in tumors that produce the hormone gastrin. This stimulates the release of large amounts of stomach acid and leads to ulcers.

You’re at higher risk for developing ulcers if you:

The first-line treatment for ulcers caused by NSAIDs involves medication such as:

If an H. pylori infection is causing your ulcer, a doctor will also prescribe antibiotics to kill any H. pylori bacteria in your digestive tract.

In some cases, doctors may also need to treat excessive bleeding. They can address this complication by:

In cases where the bleeding is severe, a person may need a blood transfusion as part of treatment.

Typically, healthcare providers perform surgery when an ulcer is bleeding profusely, and the bleeding doesn’t stop. You may also need surgery if the stomach or small intestine lining tears because the ulcer has eaten away at the tissue.

Left untreated, an ulcer can eventually lead to a tear in the stomach or small intestine lining and cause severe internal bleeding. The bacterium Helicobacter pylori (often associated with ulcers) is in itself a significant risk factor for stomach cancer.

Proper treatment can get rid of an ulcer and prevent serious complications. However, ulcers often come back. If you continue to take NSAIDs frequently, for example, you may develop another ulcer.

A bleeding ulcer isn’t a symptom to ignore. Untreated ulcers can lead to complications like severe blood loss or perforation of the tissue lining your stomach. Thankfully, there are ways to treat ulcers and stop bleeding.

If severe bleeding or treatment doesn’t stop or slow the bleeding, a healthcare provider may recommend surgery.

If you have any symptoms of an ulcer, make an appointment with a healthcare provider to get a diagnosis and start treatment. Blood in your stool or vomit, along with severe abdominal pain, is a sign that you have internal bleeding that needs immediate attention.

Ideally, you should receive treatment before an ulcer gets to this point. With treatment, most ulcers will heal and won’t lead to complications like severe blood loss. 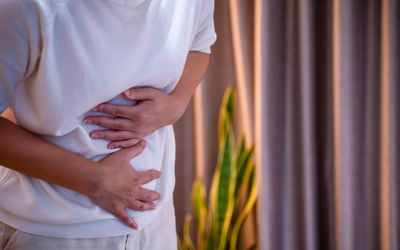 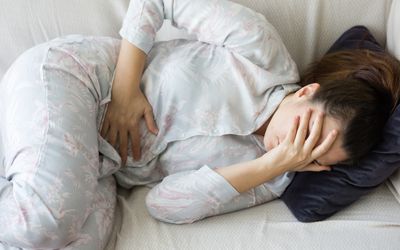 How to Sleep Better With a Stomach Ulcer