Gastrointestinal bleeding is one of the potential side effects of taking non-steroidal anti-inflammatory drugs (NSAIDs).

Risk factors for this complication include older age, multiple NSAID use (e.g., over-the-counter ibuprofen combined with prescription NSAIDs), blood thinners such as Coumadin, corticosteroids, smoking, excessive alcohol use, and prior history of stomach ulcers or gastrointestinal bleeding. In addition, some people may have been exposed to H. pylori, a common bacteria associated with a higher risk of bleeding ulcers.

Use an Ointment as an Alternative to Oral NSAIDs

Oral NSAIDs aren't always the best first-choice treatment. There may be another way to effectively relieve pain without the potential for severe side effects. Consider alternative pain relievers such as Tylenol (acetaminophen).

There are also topical treatments for localized pain including:

While diclofenac is an NSAID, local application may decrease the level of NSAID in the blood, with a lower risk of bleeding.

Adjust Your Dosage to Reduce Risk of Side Effects

It's best to take the lowest dosage of NSAID necessary to relieve your symptoms. Using the lowest effective dose reduces the risk of side effects.

Another suggestion for you to consider—with your healthcare provider's approval—is to take your NSAID as needed, rather than daily. By doing so—and keeping your dose low—you would be reducing the risk of serious side effects.

That said, be sure to take your medication as directed. If you have questions, ask your healthcare provider or pharmacist.

Avoid taking more than one NSAID at a time. If your pain is severe, you might want to take another OTC drug along with the one you're taking—or take an OTC along with your prescription. Many pain relievers are NSAIDs or contain combinations of active ingredients that include an NSAID.

Taking two different NSAIDs is dangerous—it can increase the risk of undesirable side effects and serious adverse events.

Take an NSAID That Has a Lower Risk of Ulcers

You may consider choosing a specific NSAID, such as salsalate, which may have a lower risk of gastrointestinal bleeding compared to other NSAIDs.

There is also data that suggests Celebrex, a COX-2 inhibitor, may have a lower risk of bleeding from the large intestine. Talk to your healthcare provider to see if Celebrex would be a good option for you. It's worth noting, however, that Celebrex has been tied to heart risks. It's a balance—weighing risks and benefits.

Combining an NSAID with a proton pump inhibitor (PPI) may decrease the risk of a stomach or duodenal ulcer. This can be beneficial if you're at increased risk.

It is contraindicated in women who are pregnant or could become pregnant because it can cause miscarriage.

Arthrotec (Diclofenac and Misoprostol) Side Effects
6

Talk to your healthcare provider about any symptoms you may have. This includes abdominal discomfort, dark stools, feeling lightheaded, or having a rapid heart rate.

Your provider will also regularly check your bloodwork for any signs of bleeding or harm to your kidneys.

By being proactive, it's possible to catch symptoms early and avoid an emergency situation.

Get Tested for H. Pylori

Consider being tested for H. pylori bacteria. Get treatment if you're positive—this can decrease the risk of developing an ulcer. H. pylori can thrive in your stomach or the first part of your small intestine and have been associated with a higher risk of ulcers.

In fact, H. pylori infection is the most common cause of stomach ulcers, and it also results in inflammation of the stomach lining.

Bleeding that's caused by NSAIDs typically occurs from the duodenum (the first part of the small intestine) or stomach, but may also be from the large intestine.

Take NSAIDs on a Full Stomach

It is not uncommon for people taking NSAIDs to develop gastrointestinal symptoms. Taking the medication on a full stomach may improve tolerability.

Taking NSAIDs on an empty stomach also increases the risk of developing ulcers—even if you are doing it now with no symptoms. The problem may be developing silently. To avoid the possibility, be sure to take NSAIDs with food.

While warning signs often occur, such as stomach discomfort or bloody/black stools, some patients—especially the elderly—may have no warning before they develop serious bleeding.

Avoid steroid drugs (corticosteroids), if possible, in combination with NSAIDs. If your healthcare provider has prescribed prednisone for you, make sure you let them know if you're already taking an NSAID. They might decide to add a PPI to your medication regimen to reduce your risk of developing an ulcer.

Talk to your healthcare provider about reducing your risk of developing bleeding ulcers while taking NSAIDs. It's an important conversation. 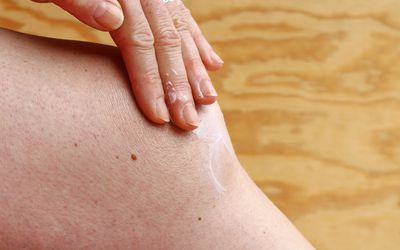