A blood smear is a test for detecting problems in red blood cells, white blood cells, or platelets. It's sometimes called a peripheral smear for morphology. The test has a wide range of uses. It can be used to tell whether an infection is viral or bacterial. It can also detect anemia, find causes of jaundice, and diagnose malaria.

A blood smear is different from automated tests such as a complete blood count (CBC). A technician or healthcare provider typically looks at a blood smear under a microscope. The blood smear results and interpretation might give them clues to help diagnose a problem.

This article will review what a blood smear looks for, how it's done, and what the results mean.

A blood smear test involves looking at a sample of blood under a microscope. First, special stains are applied to the sample. They highlight the number, shape, and any abnormalities or changes in three types of cells evaluated in the blood smear. These blood cells are:

Reasons for a Blood Smear Test

Your healthcare provider may order a blood smear for many reasons. Some of these include:

What Can a Blood Smear Show?

Information found in the peripheral smear results could include:

A blood smear is often a good measure of how well the bone marrow is functioning. When this is the aim, a blood smear test often includes a reticulocyte count. Reticulocytes are red blood cells that haven't fully developed yet.

It's important to know that if you have had a blood transfusion, the smear will include both your own blood cells and the cells of the donor.

Certain errors can affect how accurate the blood smear results are. These errors include:

Blood smears are measured by a person rather than a machine. The experience of the person analyzing the smear (called a hematopathologist) can affect how it is interpreted.

Blood Smear Test and the CBC

A blood smear is often done along with a complete blood count (CBC) and indices. Looking at both studies together can yield more helpful results. A blood smear interpretation gives a "second read" to results on the CBC.

Other tests that may be done in conjunction with a blood smear include:

There are few risks associated with the blood smear procedure. Bleeding may be a concern if you're taking blood thinners or you have a low platelet count.

A blood sample can be drawn in the hospital and in most clinic settings. Some clinics have a lab to perform the test. Others send the sample to an external lab.

There is no special preparation prior to having a blood smear test. You won't need to restrict eating or activity. It's important to bring your insurance card to your appointment. You should also bring copies of any medical records you were asked to collect.

If you can, bring the results of any other blood tests you've had. Comparing your current results to your past results can be helpful.

The technician will begin by finding a vein and cleansing the area with antiseptic. The technician will tie a tourniquet or tight band to your arm to make the vein easier to see. Then they'll insert a needle. You may feel a sharp sting and some pressure as the sample is drawn.

You will be asked to press on the site once the needle is removed. That's to limit bleeding. Then a bandage is applied.

You will be able to leave the lab when your blood smear test is done. You'll either return to your treatment room or go home. You'll receive a call with the results. Side effects are uncommon but may include bruising at the site of the blood draw or continued bleeding. In rare cases, infection can happen.

When your sample arrives in the lab, a technologist will carefully prepare the slide. This involves spreading a drop of blood along the slide so there is space between the cells.

Blood smear tests can reveal important information about many blood-related conditions. Sometimes a diagnosis can be made based on the blood smear alone, such as with hereditary elliptocytosis, which causes blood cells to have an unusual shape. Other times, further testing will be needed.

The blood smear results offer a "second look" at several findings from a CBC. These include:

Advantages of the Blood Smear Test

One of the great advantages of the blood smear over automated tests is the ability to detect findings like these:

The specific types of white blood cells counted on a blood smear gives important clues about your health. They include:

The maturity of white blood cells can show how severe an infection is. It can also indicate leukemia.

If your blood smear shows that you have a high number of unusual lymphocytes (more than 5%), you may have mononucleosis.

Apart from WBCs, the number of platelets is important to note, especially if low. Checking the size of the platelets can help narrow down a diagnosis. The blood smear test can also show how many granules are in the platelets. Granules are important in wound healing and inflammation.

Follow-up after a blood smear will depend on what the test shows. For example, if the blood smear results show immature white blood cells, a bone marrow study should be done.

A blood smear is an inexpensive test that can provide a lot of information. While automated tests can be rapid and cost-effective, it's the human eye that still detects many subtle changes in blood cells to help healthcare providers arrive at a diagnosis.

A blood smear is a test that allows a healthcare provider to take a close look at a blood sample under a microscope. Up close, the smear shows how many of each type of blood cell is present. The sizes, shapes, and colors of the cells can be seen, along with any parasites or fragments in the blood.

The process is simple: A technician draws a small sample of your blood using a needle. The sample is spread onto a slide and then analyzed.

A blood smear helps healthcare providers identify illnesses and find out how well the body is functioning. The results are even more useful when compared to the results of other tests such as CBCs.

What to Learn From a Complete Blood Count
13 Sources
Verywell Health uses only high-quality sources, including peer-reviewed studies, to support the facts within our articles. Read our editorial process to learn more about how we fact-check and keep our content accurate, reliable, and trustworthy.
Additional Reading 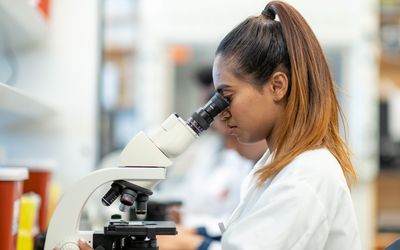