The cardiac electrical system controls the heart rate and makes sure that the various chambers of the heart contract in a completely coordinated way. These tasks are complex and intricate—for instance, when the heart’s electrical signal travels from the atria (upper chambers) to the ventricles (lower chambers), a difference in timing of just a tenth of a second can make a big impact on the efficiency of the heartbeat.

With a system that requires this level of precision and complexity, there are bound to be any number of ways it can be disrupted or disordered. So it should not be a surprise that cardiac arrhythmias, or heart rhythm problems, can result from a host of underlying causes.

This means, among other things, that a critical step in evaluating and treating a person who has a cardiac arrhythmia is to identify, as precisely as possible, the underlying cause.

This article explores the major categories of issues that can cause heart arrhythmias.

The autonomic nervous system, in general, controls the bodily functions that we normally don’t consciously think about, like breathing, sweating, and heart rate.

Vagal overstimulation and bradycardias may result from an episode of vomiting, severe constipation, or urinary obstruction (blockage of flow of urine).

Excess sympathetic response and too much release of adrenaline from acute stress or sudden fright may lead to tachycardias.

These arrhythmias should go away when the autonomic imbalance is resolved. However, treatment options, particularly those related to surgical modification of the autonomic nervous system, are rather limited.

Heart disorders that most commonly lead to life-threatening arrhythmias are:

The risk of sudden death is high in people who have had heart attacks or heart failure, but steps can be taken to substantially reduce that risk. This often includes medications.

Especially in people who may have an underlying issue that makes them prone to developing cardiac arrhythmias (for instance, because of underlying heart disease or a genetic condition), various drugs can be the triggering factor that makes an arrhythmia actually occur.

The list of drugs that can trigger arrhythmias is very large, and even includes medications taken to treat arrhythmias. If your healthcare provider recommends that you start an antiarrhythmic medication, some monitoring may be needed, particularly in first few days you are taking it.

Drugs that can trigger or exacerbate arrhythmias include:

For close family members of people who have had long QT syndrome, Brugada syndrome, or arrhythmias associated with hypertrophic cardiomyopathy (a thickening of the heart that makes pumping more difficult), genetic testing may be of value in deciding whether treatments should be considered.

For reasons that are not clear, aging is itself associated with a form of diffuse fibrosis (scarring) within the cardiac muscle that may lead to sick sinus syndrome, heart block, or atrial fibrillation. The cardiac fibrosis of aging is the most common reason for elderly people to require a pacemaker.

In addition, the risk of heart disease increases with age.

Various disorders of electrolytes, and of the acidity of the blood, can trigger cardiac arrhythmias. These disorders are most commonly seen in people who have kidney disease or diabetes, are taking certain drugs (especially diuretics), are dehydrated, or are acutely ill.

The electrolyte and metabolic disorders that most prominently cause arrhythmias include:

Cardiac arrhythmias are quite common in people who are undergoing general anesthesia, or the use of medications to make you unconscious during surgery. While most of these arrhythmias are easily managed, some can become dangerous and difficult to treat.

Anesthesia is associated with cardiac arrhythmias for several reasons, including:

Sometimes, arrythmias occur after cardiac or non-cardiac chest surgeries. The exact reason for this is unknown.

A cardiac arrhythmia is deemed to be idiopathic if, after a thorough investigation, the underlying cause remains unknown.﻿

“Idiopathic” is the medical term for “We don’t know what caused it.”

In recent years, many arrhythmias that used to be classified as idiopathic are now known to be genetic in origin.﻿﻿

In addition to all the issues listed above, risk factors for arrhythmias can also include a family history of arrhythmias or cardiac arrest (abrupt loss of heart function and consciousness) or sudden death at a young age. If this is the case, your healthcare provider may recommend heart screening options or genetic testing to help identify any unknown heart conditions.

Additional risk factors include medical emergencies such as:

One of the best way to minimize your risk of developing cardiac arrhythmias is to do everything you can to reduce your risk of risk for heart disease since ischemia often results from heart disease and can lead to arrhythmia. This includes lifestyle factors such as being active and not smoking or quitting smoking.

There are many potential causes of cardiac arrhythmias, or heart rhythm problems, but among the most common are nervous system imbalances, heart disease, or genetic conditions.

If you have a family history of arrhythmias, your healthcare provider may suggest heart screenings or genetic tests in some cases.

How Cardiac Arrhythmias Are Diagnosed
14 Sources
Verywell Health uses only high-quality sources, including peer-reviewed studies, to support the facts within our articles. Read our editorial process to learn more about how we fact-check and keep our content accurate, reliable, and trustworthy. 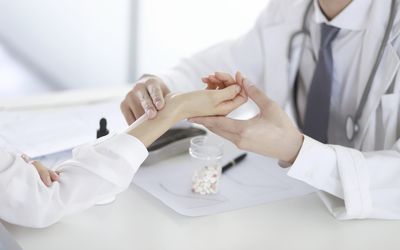