TikTok star Randy Gonzalez, who is the father behind the “Enkyboys,” shared on his account on Wednesday that he had been diagnosed with colon cancer more than six months ago.

It’s the same type of cancer 43-year-old Chadwick Boseman, who was famously recognized for his iconic role in the movie Black Panther, was diagnosed with.

“Six months ago, I got diagnosed with stage four cancer, colon cancer,” Gonzalez said on TikTok. “I kept it to myself, and I felt like it was selfish because it was personal. But I felt like I can use my situation to give awareness to young men like myself.”

Gonzalez, who is only 34 years old, was told by doctors it’s very rare for young men to be diagnosed with this type of cancer. In fact, medical professionals across the country are seeing colon and rectal (colorectal) cancer rapidly increasing among young people.

“There is an epidemic of younger patients being diagnosed with colon cancer under age 50,” Anton Bilchik, MD, PhD, surgical oncologist, chief of medicine, and director of the gastrointestinal research program at Saint John’s Cancer Institute at Providence Saint John’s Health Center in California, told Verywell. “Overall, we’re expecting about 20,000 new cases among younger people under 50 this year in the United States to be diagnosed with colon cancer.”

For Gonzalez, he was experiencing pain in his upper abdomen, and his wife then suggested he get a colonoscopy, where he later discovered he had colon cancer. At his current stage, he said he has two to three years to live, but with chemotherapy treatment, he is expected to have five.

Although the exact cause of colon cancer is not known, it’s important to recognize the symptoms and signs of this type of cancer, no matter your age.

What Is Colorectal Cancer?

Colorectal cancer, starts when cells in the body start to grow out of control in the large intestine (colon) or rectum (between the colon and anus). It also involves changing and mutating cells that have the potential to invade through the wall of the colon and rectum and spread to other organs, Bilchik said.

According to the American Cancer Society, sometimes abnormal growths called polyps form in the colon or rectum. Over time, some polyps develop into cancer.

While researchers have found risk factors like family history and age may contribute to a person’s chance of developing colon cancer, it’s not yet clear what exactly causes it. However, Bilchik added the majority of colon cancer is associated with non-familial causes, including obesity, smoking, lack of physical exercise, and diabetes.

Colorectal cancer is the third most common cancer worldwide, although it is slightly more common in developed countries like the United States compared to developing countries, Shun Yu, MD, medical oncologist at NYU Langone’s Perlmutter Cancer Center who treats colon cancer patients, told Verywell. He added in the United States, approximately 1 in 25 adults will develop colorectal cancer at some point in their lifetime.

Recently, medical professionals across the country have seen a rise in young adults developing colon or rectal cancer. Researchers from the American Cancer Society found that those born in 1990 have double the risk of colon cancer and four times the risk of rectal cancer compared to people born around 1950 when the risk was the lowest.

Deaths from colorectal cancer among people younger than 55 have increased by 1% per year from 2008 to 2017.

“The number of younger adults (below age 50) with colon cancer is gradually increasing,” Yu said. “The reason for this increase is not yet fully understood, but scientists are currently working hard to find out. Some leading theories attribute this increase to the rise in obesity rates and physical inactivity in recent decades.”

Other risk factors that are associated with increased rates of colorectal cancer include but are not limited to:

What Are the Signs and Symptoms of Colorectal Cancer?

Colorectal cancer might not cause symptoms right away, but medical professionals advise people to get checked by a healthcare provider if they’re showing any of the following problems:

“Unfortunately, by the time symptoms develop, it’s often too late,” Yu said. “Therefore, colon cancer screening is the best way to prevent colon cancer because this allows doctors to diagnose and eradicate the colon cancer before it is too late.”

Currently, the United States Preventive Services Task Force recommends that all adults age 45 and above get colorectal cancer screening. However, Yu said this age cutoff might be lowered in the near future if more Americans are diagnosed with colorectal cancer at younger ages.

“One of the greatest tragedies of early-onset colon cancer is that both patients and healthcare professionals do not think about colon cancer when evaluating younger patients,” Yu said. “As a result, younger patients are much more likely to be undiagnosed for months—therefore when it is diagnosed, the cancer is more likely to already be at a later stage.”

Yu believes to improve this statistic and recent trend, there needs to be increased awareness of early-onset colorectal cancer among both patients and healthcare professionals. It’s also important to have conversations about colorectal cancer, screening options, and in general healthy lifestyle habits in schools and at home, Bilchik said.

“Be aware that this cancer has become a young person’s cancer; however, up to 70% of colon cancer is preventable,” Bilchik said. “So many options exist, screening is important, but prevention (like eating healthy and getting exercise) is even more important.” 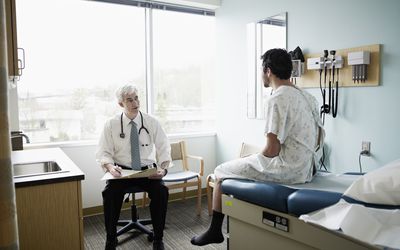