For patients with dementia struggling with depression, drugs alone may not always be the most effective treatment, according to a new study.

Researchers in Canada reviewed more than 250 studies of depression in people with dementia and found that other non-drug therapies, like occupational therapy and exercise, were just as effective as drugs. The February study was published in The British Medical Journal.﻿﻿

However, there is growing interest in updating the way depression is treated among dementia patients. Evidence of harm associated with antidepressant use in those with dementia—in the form of falls and fractures—and increased interest in "linking patients with non-drug interventions in their community, as an effective treatment to combat symptoms of depression, loneliness, and isolation, has led to a renaissance for non-drug interventions," according to the study authors.

"We tried to synthesize [the literature] to help healthcare providers have this conversation with patients and caregivers so that they understand that there are real benefits to these non-medication based treatments," study author Jennifer A. Watt, MD, PhD, a geriatrician and assistant professor at the University of Toronto, tells Verywell.

If your loved one is diagnosed with dementia and is exhibiting symptoms of depression, talk to their healthcare providers about what their treatment options are. Know that drug therapies aren't the only option, and other forms of treatment are available as well.

Alzheimer's is estimated to account for 60 to 70% of cases of dementia, while other common risk factors for developing dementia include conditions that affect the brain, such as stroke and traumatic brain injury. Long-time alcohol or drug use, history of dementia in the family, depression, and lack of exercise have all been linked to a risk of developing dementia as well.﻿﻿

The changes in cognition that accompany the disorder, ranging from forgetfulness to decreased control of emotions and inability to perform daily tasks, can bring about the onset of depression.

Symptoms of depression in people with dementia can include:

Although not everyone will fulfill the criteria for a major depressive disorder, the authors write, these symptoms will affect the individual as well as their family, friends, and caregivers. They're also linked with lower quality of life and increased risk of death, as well as increased distress and depression in caregivers.﻿﻿

"At least one in three people get symptoms of depression when they have dementia," Watt says, even if they don't have a formal diagnosis by their doctor. And when people start exhibiting these symptoms she adds, "often there's a reason for that. Something has happened or they just need some more pleasurable or pleasant activities in their life."

For the study, the researchers sought to compare how various drug and non-drug treatments compare with usual care—or what healthcare workers usually provide, from drugs to exercise—at treating depression symptoms. They reviewed 256 studies encompassing 28,483 participants with dementia. While most participants showed depression symptoms, they had not received a depressive disorder diagnosis.

When comparing the data, researchers found that ten interventions were associated with a greater reduction of symptoms of depression compared to usual care:

The last three were more effective than some drug interventions, while the rest were just as effective.

Regardless of the therapy, the researchers write that any non-drug therapy is likely supported by a drug, such as in the case of cognitive stimulation combined with a cholinesterase inhibitor.

This study further supports these 10 research-backed interventions, and will hopefully, Watt says, guide healthcare providers in advising their patients. "Based on my experience [as a physician], a lot of patients and caregivers don't actually realize how well these other interventions work, so they really do need a healthcare provider to have that discussion with them and help them to understand what their options are," Watt says.

One instance showing how these interventions work sticks out in her mind. "I always think of this one example where I had a patient who was on dialysis and they were kind of unsettled," Watt says. "And I had explained to the caregiver to hold their hand, rub their hand, and that this will likely be very calming for them." At first, the caregiver seemed a bit taken aback, but eventually saw how this helped the patient. "It could also be with just a simple shoulder or lower back massage in the evenings before going to bed," Watt adds.

Expanding the Definition of Health Care

All the therapies identified work to relieve depression symptoms in a variety of ways. For massage and touch therapy, Watt says it relaxes and reminds the patient that someone's there. However, current healthcare systems might not count these therapies as "health care," which can pose barriers to access.

"I know this is a problem in the U.S. like it is in Canada, [it's] just the way our healthcare systems are built," Watt says. "Certain interventions are more easily reimbursed than others." For example, drugs might count as "healthcare" more than occupational therapy.

The current study could work to inform and update healthcare policies, Watt adds. "Not everybody wants to try medication first," she says. "Certainly there are some instances where medications are necessary. But if they can, [many] would prefer to try other non-medication-based strategies first, or at least to understand what their options are." 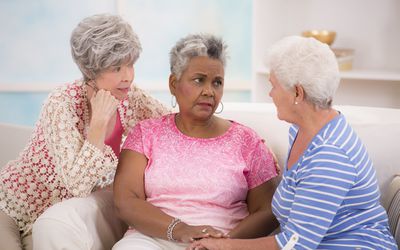