A Triad of Symptoms, MRI, and Lumbar Puncture to Diagnose NPH

Normal pressure hydrocephalus is an enlargement of the spaces in the brain, called ventricles, that contain cerebrospinal fluid — a clear fluid that bathes the brain and spinal cord and is often termed abbreviated CSF.

Normal pressure hydrocephalus causes difficulty walking, thinking, and controlling the bladder. Symptoms can improve when a neurosurgeon places a drain called a shunt into the ventricles so that CSF flows into the abdomen instead of flowing down the spinal column. Any neurosurgical procedure carries some risk, however, and the benefits of placing such a stent for NPH are not always certain — so it's critical NPH be properly diagnosed. Even after this step, some patients may improve more with stent placement than others.

Difficulty walking, for example, may be due to spinal stenosis, vestibular problems, vision problems, or peripheral neuropathy. Urinary incontinence is also very common in old age for a variety of reasons. Cognitive impairment may be due to extremely common disorders such as Alzheimer's disease. Some dementias can also increase the risk of walking problems, such as Lewy body dementia, Parkinson's disease dementia, or vascular dementia.

Many of these mimickers can be carefully excluded by a thorough medical examination. For example, Lewy body dementia or Parkinson's disease can cause similar walking problems, but tend to have a narrower gait than NPH, and often have other features such as visual hallucinations.

Another problem is that having NPH doesn't prevent people from having additional dementia, especially Alzheimer's disease. Between 20 to 60 percent of people who underwent brain biopsy at the time of shunt placement have been found to have Alzheimer's pathology. Those who hope to see dementia resolve with shunt placement may be then disappointed since Alzheimer's does not improve with such neurosurgery.

The first steps in the diagnosis of NPH will likely focus on symptoms such as dementia. A standard workup will include laboratory studies of the blood for potentially reversible causes, such as vitamin B12 deficiency or thyroid disease.

Neuropsychological tests will be done to confirm the presence of cognitive problems, though no single test can confirm NPH. General patterns consistent with NPH include slowness on timed tasks and poor performance on tasks of attention and executive function. Other dementias, though, such as vascular dementia or Lewy body dementia, can cause similar changes on testing.

By definition, patients with normal pressure hydrocephalus will have large ventricles on a neuroimaging study such as magnetic resonance imaging (MRI) or a computed tomography (CT) scan. Ventricles often get larger as brains shrink in normal aging or in other dementias, but in NPH the ventricular enlargement is out of proportion to that of the rest of the brain. This is, however, something of a judgment call on the part of the neuroradiologist and treating physician, and opinions may vary on this point. Some published measurements of ventriculomegaly exist and can guide doctor's recommendation in some cases, but these guidelines are not universally agreed upon.

Some MRIs in patients with NPH show decreased signal where the CSF flows throw a narrow channel called the Sylvian aqueduct through the brainstem. This is thought to represent higher flow velocity. While this finding may be mentioned, most studies show no clear correlation between this finding and improvement after neurosurgery.

The "gold standard" of diagnosing NPH is an improvement of symptoms with ventricular shunting. This standard is practically useless, though, since in order to recommend a risky procedure like shunt placement the doctor must already be highly confident that the patient has NPH. There is also no agreement of what defines a significant improvement in symptoms, or how long to wait after shunt placement before those improvements should be seen. Moreover, a poor response to shunting may be due to problems beyond misdiagnosis — for example, the patient could have additional dementia.

Because shunt placement is invasive, less aggressive methods of CSF removal are usually attempted first to verify the likelihood of a patient's improving with a shunt. These techniques include a lumbar puncture or a lumbar drain. Again, however, there is no standard for what defines a significant improvement, leaving physicians to rely on their judgment and a few "rules of thumb."

A lumbar puncture can be done in a physician's office and involves the removal of a significant amount of CSF (between 30 to 50 cubic centimeters). The most common improvement is in patients' walking, with faster gait speed and longer stride length. Cognitive tests can also be performed, including tests of attention and memory. Improvements on these measure 30 minutes to a half an hour after the procedure likely indicate a benefit to shunting.

A different method involves placing a temporary drain in the lumbar space, through which CSF can leak at about 5 to 10 milliliters per hour. Studies have demonstrated that this can be an excellent way of marking those who will respond to shunting, though other studies suggest that many patients who do not improve with a drain may still improve with shunting.

Less widely used methods of diagnosing NPH include intracranial pressure monitoring or CSF infusion tests, but the invasiveness of these procedures limits their practical use. Cisternography, which uses radioisotopes to investigate CSF flow, has not been shown to predict outcomes with shunt placement. Other imaging techniques such as newer MRI techniques or single photon emission CT (SPECT) require further investigation to establish their potential usefulness in NPH diagnosis.

The diagnosis of NPH depends on a careful history and physical examination to begin to exclude other disorders that can cause the same triad of dementia, gait instability, and urinary incontinence. An MRI will show large ventricles deemed out of proportion to the rest of the brain, and can further exclude other potential medical explanations. A lumbar puncture or lumbar drain that leads to symptomatic improvement is most suggestive of true NPH that could benefit from shunt placement by a neurosurgeon. 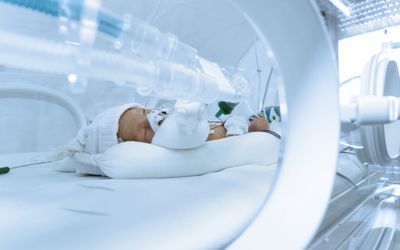 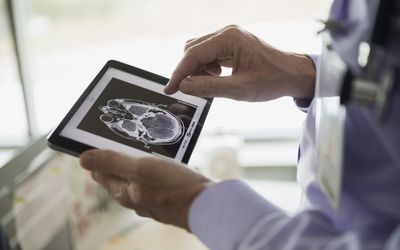 White Spots on a Brain MRI