DISH vs. Ankylosing Spondylitis: What Are the Differences?

Diffuse idiopathic skeletal hyperostosis (DISH) and ankylosing spondylitis (AS) are types of arthritis. Both conditions cause similar symptoms, like pain and stiffness, particularly in the spine and back. However, there are distinctions between the two conditions.

This article discusses the similarities and differences of DISH and AS.

DISH causes hardening of ligaments (the soft tissues that connect bones). It can also cause bone spurs to grow in these ligaments. This often occurs around the spine, but can occur in other areas too.

AS causes chronic inflammation that mostly affects the spine, but can affect other joints, like the hips and knees, as well. Eventually, the bones may fuse together.

AS is an autoimmune condition, whereas DISH is not.

DISH and AS may feel similar, because they both cause stiffness, pain, and reduced mobility, particularly in the back.

However, there are some notable differences in symptoms that can help differentiate the conditions. For example, ankylosing spondylitis symptoms usually appear in early adulthood, whereas DISH symptoms tend to appear past the age of 50.

Some people with DISH do not have any symptoms at all. They may only discover they have it after investigations for another condition.

When symptoms are present, they can include:

Similar to DISH, ankylosing spondlyitis symptoms include characteristic signs of arthritis. including pain and stiffness. However, chronic inflammation from AS can have systemic (body-wide) effects.

Symptoms of ankylosing spondylitis can include:

DISH and AS may seem similar on the surface, because they are both types of arthritis with some similar symptoms, like back pain. However, the underlying causes and mechanisms of these two conditions are different.

DISH occurs when there is a buildup of calcium salts in the soft tissues that connect to bones (ligaments and tendons). This causes calcification (hardening of the tissues) and ossification (bone spur growth in the tissues). It is the result of abnormal activity of osteoblasts (bone forming cells).

However, researchers do not know exactly why this process occurs. Several risk factors have been tied to DISH, although none have been identified as a direct cause. These risk factors include:

AS is an autoimmune condition that occurs when chronic inflammation affects the joints, particularly the sacroiliac joint linking the pelvis to the lower spine and the joints between the vertebrae.

Researchers have not identified an exact cause for ankylosing spondylitis but believe that both genetic and environmental factors are at play.

Genetically, it is estimated that 95% of people with AS have a HLA-B27 variation, a gene that affects the immune system. Keep in mind that most people with that genetic variation do not develop ankylosing spondylitis, so it is not a direct cause, and other genes have been linked to AS as well.

DISH and AS are diagnosed differently.

Unlike AS, DISH can be definitively diagnosed with imaging. This may be done as part of the differential diagnosis process to rule out DISH, before someone is diagnosed with ankylosing spondylitis.

A person's medical history and symptoms may indicate DISH. Radiologic imaging can confirm a diagnosis, if bone spurs or calcification of the ligaments are identified in certain places.

These imaging techniques can include:

In some cases, your healthcare provider may want to use all three types of imaging to get the fullest picture of your spine and joints.

Unfortunately, there is no definitive test to diagnose AS. Your healthcare provider will use a combination of medical history, family history, symptoms, imaging (including MRIs and X-rays), and blood tests to identify the HLA-B27 gene.

They may also rule out other possible conditions, including DISH.

Both DISH and ankylosing spondylitis are chronic conditions with no cure. However, AS can go into periods of remission with immunosuppression treatment, while DISH will not.

It's essential to correctly diagnose DISH and AS, because some treatments and expected outcomes may vary.

DISH symptoms can be treated by:

In certain cases, surgery may be recommended to remove bone growth, particularly if it is compressing the spinal cord or a nerve, or impacting breathing.

AS treatment also focuses on reducing pain and conserving joint integrity and mobility. Treatments can include:

It is not always possible to prevent DISH or AS, but adopting healthy lifestyle habits can help, such as:

Additionally, for both conditions, it's important to receive a correct diagnosis and start treatment promptly so that further disease progression can be prevented or, at the very least, slowed.

DISH and ankylosing spondylitis (AS) are both forms of arthritis that can result in significant back pain and loss of mobility. However, they have different causes and mechanisms. AS is a result of chronic inflammation of the joints, whereas DISH is a result of ligament calcification and ossification.

AS is primarily treated with immunosuppression, while there is no treatment for DISH other than symptom management through lifestyle habits, physical therapy, and possibly surgery.

Arthritis in any form can be painful and life-changing. DISH and AS can both cause significantly painful symptoms. If you experience signs of either condition, work with a healthcare provider to arrive at an accurate diagnosis so you can start treatment as soon as possible. 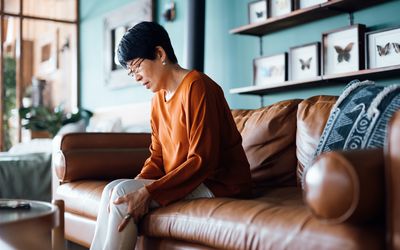