Is Your Fibromyalgia Primary or Secondary?

Adrienne Dellwo
Adrienne Dellwo is an experienced journalist who was diagnosed with fibromyalgia and has written extensively on the topic.
Learn about our editorial process
Medically reviewed
Verywell Health articles are reviewed by board-certified physicians and healthcare professionals. These medical reviewers confirm the content is thorough and accurate, reflecting the latest evidence-based research. Content is reviewed before publication and upon substantial updates. Learn more.
by
Shaheen Lakhan, MD, PhD

Fibromyalgia is a disorder characterized by widespread musculoskeletal pain accompanied by fatigue, sleep, memory, and mood issues.﻿﻿ While we still don't know exactly what's going on in the body that leads to fibromyalgia, we do know that chronic pain can cause changes in the brain and central nervous system that lead to central sensitization—essentially making the body overreact to pain and other stimuli (noise, smell, bright lights, etc.). That's why it's believed people with rheumatoid arthritis (RA), lupus, multiple sclerosis (MS), and other chronic pain conditions frequently develop FMS.

In general, medication and self-care are used to treat both kinds of fibromyalgia. The emphasis is on minimizing symptoms and improving general health. No one treatment works for all symptoms.﻿﻿

Medications can help reduce the pain of fibromyalgia and improve sleep. Common medications include those below.

It's important to make the distinction between primary and secondary when we talk about treatments. For example, some people have success with acupuncture in treating their fibromyalgia.﻿﻿ It could be because there is some evidence acupuncture is successful for a related condition, myofascial pain syndrome (MPS, or CMP for chronic myofascial pain). It is currently impossible to say for sure whether acupuncture relieves fibromyalgia symptoms directly (some studies suggest it can) or whether relieving the MPS symptoms had a secondary effect of calming fibromyalgia symptoms.

The pain and lack of sleep associated with fibromyalgia can interfere with the ability to function at home or on the job. The frustration of dealing with an often-misunderstood condition also can result in depression and anxiety. 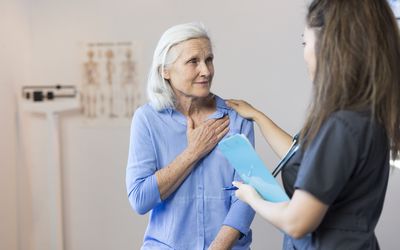