What Is Genetic Testing for Cancer?

Genetic tests can determine whether you are at risk of developing cancer by identifying mutations in a person’s genes. The risk of developing cancer increases if you have a genetic predisposition or susceptibility to cancer. Approximately 5% to 10% of all cancers are related to an inherited gene mutation. Finding a mutation may help provide an early diagnosis and peace of mind. However, genetic testing can't detect all gene mutations, may provide false negative results, and can result in increased anxiety and high medical costs.

Most cancers start because of acquired gene mutations that happen during a person’s lifetime.﻿﻿﻿﻿﻿﻿ Sometimes these gene changes have an outside cause, such as exposure to sunlight or tobacco, but gene mutations can also be random events that happen inside a cell without a clear reason.

Acquired mutations only affect cells that grow from the mutated cell. They do not affect all the cells in a person’s body. All the cancer cells will have the mutations, but normal cells in the body will not. Because of this, these mutations are not passed on to a person’s children. This is very different from inherited mutations, which are in every cell in the body, including the cells without cancer.

What Is a Genetic Predisposition to Cancer?

Genetic predisposition is an increased chance of developing cancer due to gene mutations in specific genes. These variations are frequently inherited from a parent. While inheriting these genetic mutations increases the risk of cancer, it doesn’t mean someone with inherited gene mutations will necessarily develop cancer. In other words, cancer is not inherited, but someone can inherit a gene that increases their risk of cancer. That predisposition can be large or small, depending on the particular gene and other risk factors.

What Are Genetic Tests for Cancer?

Two types of tests are used to identify a genetic predisposition:

Researchers are learning that almost all diseases have a genetic element, including cancer. Some conditions are caused by mutations in a gene like cystic fibrosis and sickle cell disease. However, some diseases like heart disease or type 2 diabetes are likely caused by changes in multiple genes combined with lifestyle and environmental conditions. Conditions caused by many contributing factors are called multifactorial or complex disorders.

Although multifactorial disorders are normally found in families, it’s difficult to pinpoint a clear pattern of inheritance, which makes it hard to assess the risk of inheriting the condition.

Should I Get Tested?

If you are concerned about your family’s medical history related to cancer, you may want to consult a genetic counselor and get tested.

You may want to get genetic testing for cancer predisposition if you have any of the following:

Genetic testing cannot determine the risk of all types of cancers.

The Downside of Genetic Testing

Getting screened for cancer can help, but there is no question that it comes with some stressors, including:

Speak with a genetic testing counselor to discuss any of these concerns.

How Is Genetic Testing Done?

Prior to a genetic test, you'll meet with a genetic counselor, who will go through the procedure and answer any question you may have. They will talk about the testing procedure, as well as the test’s benefits, limitations, and the significance of your test results

A sampling of blood, hair, skin, amniotic fluid, or other tissues is taken and sent to a lab where technicians examine changes in DNA, chromosomes, and proteins. Results are sent in writing to your genetic counselor, healthcare provider, or, if requested, directly to you.

Now you also have the option of conducting a genetic test at home.

The only cancer risk home test approved by the U.S. Food and Drug Administration (FDA) is the Genetic Health Risk Report for BRCA1/BRCA2 by the genetic testing company 23andMe. The test looks for three specific variations in the BRCA1 and BRCA2 genes that are associated with an increased risk of breast cancer, ovarian cancer, and potentially other forms of cancer in people of Ashkenazi (Eastern European) Jewish ancestry.

This test requires you to collect a saliva sample in a test tube. Afterwards, you will have to ship it to the lab. Test results are posted on a secure website for your review. The test can detect genetic markers that indicate increased risk of cancer, but that doesn’t necessarily mean that you will definitely develop cancer.

More than 1,000 variations in each of the BRCA1 and BRCA2 genes have been associated with an increased risk of cancer. The FDA-approved direct-to-consumer genetic test analyzes only three of these variations, however. Also, the variations included in the test are much more common in people of Ashkenazi Jewish background than in people of other ethnicities, so the results may not be useful to you if you are of a different ethnic background.

The FDA warns that consumers and healthcare professionals should not use the test results to determine any treatments. Instead, these decisions require confirmatory testing and genetic counseling.

Genetic testing is available for the following types of cancers:

What Do Test Results Mean?

Your genetic test results could be:

Genetic testing is an important tool that can give you peace of mind. For individuals who have a family history of cancer, it can also be a lifesaver and alert them to monitor any changes to their health so their cancers can be diagnosed and treated early. It's important to remember, though, that genetic tests for cancer cannot detect risk of all types of cancers.

If you plan to take a genetic test to determine if you have a higher risk of cancer, you should undergo genetic counseling so all your questions can be answered. Keep in mind that if your family is predisposed to cancer, that doesn’t necessarily mean you will develop the disease. 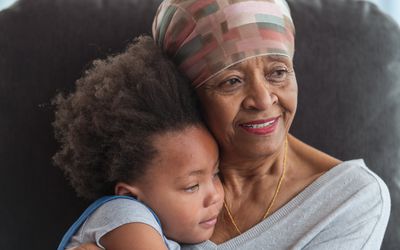