How an Acid Reflux Pillow Can Lessen Symptoms of GERD

Acid reflux is a common problem that is a symptom of gastroesophageal reflux disease (GERD). The discomfort of acid reflux is caused by acid flowing backward out of the stomach and into the esophagus (food tube).

This condition happens to many people from time to time, but it can also be chronic (lasting a long time) and damage the esophagus. As many as 15% to 30% of Americans experience acid reflux, which may occur at night or when lying down after eating a meal.

Many over-the-counter and prescription medications are used to help with GERD. They have various ways of working, including lowering stomach acid or preventing the stomach from making too much acid.

However, not everyone who experiences acid reflux gets results with medication. As many as 30% of people who use medications to try and stop the discomfort of GERD still have symptoms. For that reason, many people look for ways to handle the problem without more medications.

An inexpensive and simple way that has been used is elevating one’s upper body with a wedge pillow while lying down or sleeping.

How to Stop Acid Reflux at Night: Get Better Sleep With GERD

GERD symptoms tend to be worse after eating a meal and then lying down. After eating bigger meals, and especially foods higher in fat content, the symptoms might be worse. Other food triggers may include fried foods, citrus, and chocolate. Reflux can also result from having coffee, carbonated beverages, or drinking alcohol (beer or wine) before lying down.

The reason why symptoms may be worse while lying flat is that the position puts the stomach and the esophagus on the same level. This can result in the acid from the stomach more easily flowing into the esophagus. When standing or sitting up, gravity can help keep the stomach acid where it belongs and out of the esophagus.

What may help is using a pillow that raises the upper body while lying down or sleeping. When the torso is elevated at an angle, gravity can help keep the stomach acid in the stomach. Some people find that using a wedge pillow is easy to sleep on and helps with GERD symptoms.

In one small study, using a wedge pillow that raised the body on a 30-degree incline while sleeping on one’s left side reduced the amount of acid in the esophagus by 87%. Symptoms improved for 97% of the patients in the study. The authors concluded that it’s worth using a wedge pillow, especially because it’s a non-invasive way of treating GERD.

Benefits of a Sleeping Wedge Pillow

What to Look for When Shopping

Elevating the head of the bed could be considered an adjunct therapy or alternative to medications for some people with acid reflux. There are many ways to elevate the torso while lying down or when sleeping. Some people may find that a wedge pillow is inexpensive, easy to use, and doesn’t inhibit sleep.

The studies on using wedge pillows show that a certain amount of incline is needed to help with reducing symptoms. Using a few extra pillows might not be enough, but a wedge can give the right height.

Some studies that showed elevation was helpful used wedge pillows that were between 8 and 11 inches high (20 to 28 centimeters). That can give the upper body the 20-degree level of incline that was used in some trials.

What the pillow is made of isn’t important; the key is that it keeps the body supported at the right angle. As long as it works as intended, the choice of material may be based more on personal preference.

Worth considering are if harder or softer materials are preferred and if the pillow has a cooling layer or panel for those that tend toward being too warm while sleeping.

A wedge pillow will need to fit on the bed. Sleeping partners, who may or may not also have GERD, need to be considered, along with how much space one prefers when sleeping.

The cost of wedge pillows varies considerably: they can be priced anywhere from $40 to $100 or more. More expensive pillows might not necessarily work better, so shopping around to find the best price with the desired features will be part of choosing the right pillow.

Some pillows may have the ability to adjust to different heights. This can be helpful if it’s unclear what level of elevation might be needed or if the pillow will serve more than one purpose, such as for GERD symptoms but also for sitting up in bed to read.

To maintain the needed angle, a wedge pillow can’t be too soft. GERD pillows tend to be firmer, so they do not compress as much. Personal preference on softness vs. firmness will also play into selection, the same as it does with any other sleeping pillow.

To stay elevated all night, the pillow also needs to stay in place, which means that it will need to have a certain weight. Some people may prefer the pillow to be weightier, so it doesn’t move or slip during the night.

GERD is often treated with medications. This can include both over-the-counter and prescriptions. For those whose symptoms don’t improve with one medication, two or more may be tried at the same time. It’s important to seek help from a physician to find the right medications and step up therapy when needed.

Some people may start addressing their symptoms of heartburn and discomfort with antacids, which are available over the counter. Some antacids, such as Tums, Mylanta, and Rolaids, contain calcium carbonate and/or magnesium hydroxide and aluminum hydroxide.

These substances work to neutralize stomach acid so that it does not cause symptoms. Gaviscon is an antacid that contains alginic acid and other ingredients which create a foamy physical barrier in the stomach that helps prevent acid from flowing back up into the esophagus.

Also called histamine blockers or H2-blockers, these medications help stop the production of stomach acid. This may reduce symptoms of GERD because there is less stomach acid to flow back into the esophagus. There are two H2-blockers available in over-the-counter and prescription forms: Pepcid (famotidine) and Tagamet (cimetidine).

Certain brands may also be prescribed by a doctor in a different dosage. Brands that are only available with a prescription include Aciphex (rabeprazole), Dexilant (dexlansoprazole), and Protonix (pantoprazole).

Along with a wedge pillow, different types of remedies can be tried at home to lessen GERD symptoms. Many of these interventions can be used quickly and easily, but it’s important to seek treatment from a physician if the symptoms can’t be controlled without medication. More help may be needed to avoid complications.

Avoid alcoholic drinks. Drinking beer and wine can weaken the esophageal sphincter, allowing more acid to flow from the stomach back up into the esophagus. This may lead to heartburn symptoms, especially when drinking later at night and before going to bed.

Avoid tight belts or clothing. Restrictive clothing around the belly is associated with worsening of GERD symptoms. Tight belts, girdles, or corsets may increase abdominal pressure and increase the risk of GERD symptoms. This might be especially true for those who have obesity with more belly fat.

Make diet changes. Some foods may contribute to GERD symptoms, including meals of fried foods, greasy foods, high-fat foods, spicy foods, foods with citrus, chocolate, peppermint, and caffeinated or carbonated beverages. Cutting back on these foods, especially before laying down or going to bed at night, may help. There may be some trial and error with finding which foods worsen symptoms and which foods are helpful or don’t affect symptoms.

Time meals. Some people with GERD may find that eating smaller meals more frequently helps to lessen discomfort. Eating three hours before going to bed may also help in avoiding symptoms coming on at night and affecting sleep. 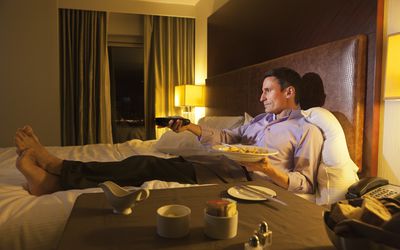 How Long to Wait Between Eating and Bed 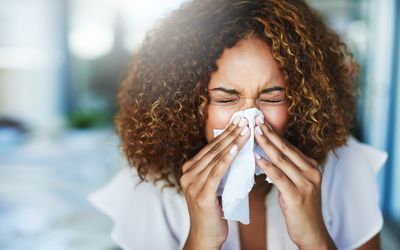 Why a Stuffy Nose May Get Worse at Night 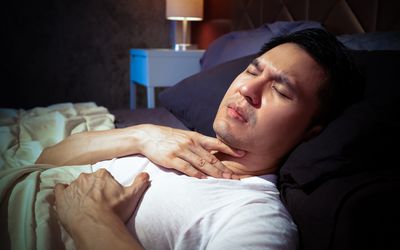 How to Stop Acid Reflux at Night: Get Better Sleep With GERD 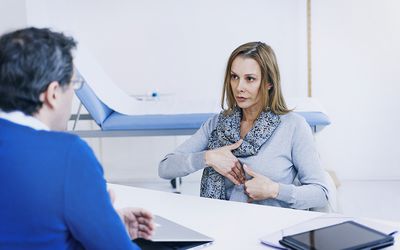