Can gluten cause problems with your sleep if you have celiac disease or non-celiac gluten sensitivity? Although little research has been done on the subject, what research there is indicates the answer may well be "yes."

However, despite their fatigue, many people with celiac and gluten sensitivity report problems getting to sleep and staying asleep.﻿﻿ These problems seem to be very common before people are diagnosed, but may persist following diagnosis once the people start the gluten-free diet.

Other people seem to need more sleep than they're getting ... even if they're getting plenty already. I've read accounts of people with celiac and gluten sensitivity who sleep 14 or even 16 hours each day when they can and still don't feel rested.

Problem With Gluten and Sleep Likely Not Related to Malabsorption

So what is the problem involving gluten and sleep?

In diagnosed celiacs, some researchers have hypothesized that the problem might involve nutrient deficiencies stemming from intestinal damage and villous atrophy. However, the one 2010 study looking specifically at the quality of sleep in people with celiac concluded that the problem doesn't seem to be nutritional status—people continued to have problems sleeping six years after starting the gluten-free diet, after any malnutrition from their intestinal damage had healed.﻿﻿

Evidence from some medical studies indicates problems with insomnia and poor-quality sleep, plus problems with overwhelming fatigue and sleeping too much may affect celiacs most when they're first diagnosed. But other studies show that problems persist despite the gluten-free diet. In addition, none of the studies address problems with sleep faced by the non-celiac gluten-sensitive.

For example, one 2010 study considered fatigue as a determinant of health in patients with celiac disease, some of whom were on the gluten-free diet and some of whom were not. It found considerably worse fatigue in people who had been diagnosed but had not started the diet.﻿﻿

Another study in 2010 compared newly-diagnosed celiacs to those who had been on the diet for at least a year and found improvements in sleep for the second group, but those differences did not reach statistical significance. Nonetheless, all celiacs had worse sleep quality than people without the condition, with higher incidences of abnormal sleep duration, sleep disturbances, use of sleep medications and daytime dysfunction related to sleep.﻿﻿

According to that study, sleep disorders are directly related to depression, anxiety, and fatigue in celiacs, and are inversely related to quality-of-life scale scores. However, the study concluded that celiacs could have sleep disorders regardless of whether they had diarrhea or other digestive celiac symptoms at diagnosis.

A study showed that sleep problems were not fully resolved once the people with celiac disease adopted the gluten-free diet, even though most of their other celiac disease symptoms did improve.

Currently, it hasn't been proven whether gluten ingestion plays a direct role in sleep problems for people with celiac disease and gluten sensitivity. Dr. Rodney Ford, a New Zealand pediatrician and author of The Gluten Syndrome, hypothesizes that gluten in your diet affects your brain and other neurological tissue directly, causing these symptoms, but there's no research showing that to be true.﻿﻿

Plenty of people suffer from problems getting to sleep, frequent awakenings, poor-quality sleep and nightmares within six to 12 hours of ingesting gluten accidentally (i.e., getting glutened). In fact, if I awaken from a night of poor sleep, it's frequently followed by my cascade of glutening symptoms, indicating I've ingested gluten.

Therefore, if you've noticed a strong correlation between poor sleep and known gluten cross-contamination, you're far from alone. But if that's the case (or even if it's not), what can you do to improve your sleep?

Get rid of as much gluten as you can. Some people find they react to the very low levels of gluten found in gluten-free-labeled foods. You may need to drop most or all processed foods from your diet and stick with only whole, unprocessed foods to see a difference.

Follow the advice to create a better sleep environment for yourself. Follow guidelines for getting a better night's sleep, including ditching the in-bedroom TV, computer, and cell phone, plus avoiding naps.

Seek help if necessary. Sometimes, we just can't figure things out for ourselves. If you're certain your diet is clean of all trace gluten (including the tiny amounts of gluten in gluten-free foods) and you've optimized your sleep environment, but you're still having trouble getting a good night's sleep, you may need to ask your healthcare provider for a referral to a sleep specialist. Sleep disorders are common in people with celiac disease and are linked to depression, anxiety, and fatigue. It's possible that a diagnosis plus treatment may help you get back on track ... and back to sleeping soundly. 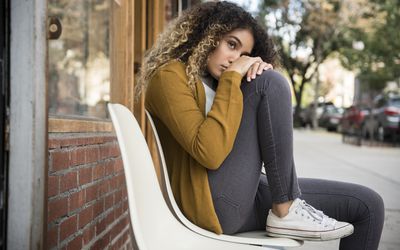