Feeding babies gluten between 4 and 6 months of age is associated with reduced celiac disease prevalence, according to a recent analysis of data.

“This report makes a strong argument for the early introduction of gluten between the ages of 4 to 6 months to prevent the development of celiac disease by 3 years of age,” Brandon Sparks, MD, pediatric gastroenterologist at Riley Hospital for Children in Indiana, tells Verywell. Sparks was not involved with the report.

Health experts are now recommending that highly allergenic foods like peanuts and eggs should be given to babies early and often to reduce the risk of developing allergies. Sparks explains that although the pathophysiology of celiac disease and classic food allergies—like peanuts—is different, the idea of developing an immune tolerance by early introduction is similar.

“By introducing a weekly dose of gluten in the diet of primarily breastfed infants, the authors were able to demonstrate a significant difference in the development of celiac disease when compared to the standard introduction of gluten," he says.

The analysis, published in JAMA Pediatrics on September 28, utilized data from the Enquiring About Tolerance (EAT) study, a clinical trial that examined the dietary intake of 1,004 children from England and Wales, and recorded any celiac disease diagnosis.

"Longer-term follow-up will be beneficial to see if this early introduction of gluten reduces lifetime risk of celiac disease or merely delays onset of the disease,” Sparks says.

If you are introducing solids to your infant, consistently offering them foods that contain gluten early on may help protect them against developing celiac disease.

What Is Celiac Disease?

Celiac disease is a condition in which consuming gluten, a protein naturally found in certain foods, can result in abdominal pain, diarrhea, constipation, and other side-effects. People who manage celiac disease avoid consuming gluten altogether. Some sources of gluten include:

Certain breads, pastas, crackers, and cookies are off-limits for those managing celiac disease. Gluten can even be found in certain beers, condiments, soups, and plenty of other unexpected items. For those with celiac disease, the small intestine can become damaged if gluten is consumed and could result in challenges absorbing certain nutrients.

Should Babies Be Given Gluten As Early As 4 Months?

While the current data suggests that early exposure to gluten is beneficial to babies for reducing the risk of celiac disease, past data suggests otherwise. In one 2019 study, increased gluten intake during the first 5 years of life was an independent risk factor for celiac disease autoimmunity and celiac disease in genetically predisposed children.

In fact, according to the authors of the current study, four clinical trials evaluating gluten intake and celiac disease risk did not find an association between the timing of gluten introduction and prevalence of the disease. However, they do note that in three of these trials, gluten consumption began after 6 months of age. So, to see a true benefit, exposing babies to gluten after 6 months of age may be too late.

Based on the results of this trial, Sparks says that it is not unreasonable to recommend early introduction of gluten as a component of complementary foods beginning at 4 months of age, as long as it is given in a safe manner, “such as a dissolvable biscuit or cereal under supervision to prevent choking.”

Since the American Academy of Pediatrics (AAP) recommends introduction of solid foods closer to the 6-month mark, Kacie Barnes, MCN, RDN, a Dallas-based registered dietitian, hesitates to make a blanket recommendation for all babies to consume gluten at 4 months of age.

“There are many factors to consider when starting a baby's solid diet, and while preventing celiac disease is one of them, it's not appropriate for all babies to begin introduction to gluten-containing foods—or any foods—around the 4-month mark,” Barnes tells Verywell.

While she thinks that early consumption of gluten should be decided on a case-by-case basis—like having a known genetic risk for celiac disease—for most infants, she recommends waiting until closer to 6 months to introduce solids, in accordance with the AAP's recommendations.

Any introduction to solid food should be done under the supervision of your child’s pediatrician. But if a family wishes to introduce gluten to a baby who is developmentally ready to consume solid foods—meaning the baby is sitting unassisted and does not have s tongue-thrust reflex—Barnes offers some suggested foods. A strip of lightly-toasted sliced bread with avocado or Greek yogurt on top or well-cooked pasta tossed in olive oil make excellent gluten-containing snacks safe for little ones.

Caring for Children and Teens With Celiac Disease
4 Sources
Verywell Health uses only high-quality sources, including peer-reviewed studies, to support the facts within our articles. Read our editorial process to learn more about how we fact-check and keep our content accurate, reliable, and trustworthy.
See Our Editorial Process
Meet Our Medical Expert Board
Share Feedback
Was this page helpful?
Thanks for your feedback!
What is your feedback?
Related Articles 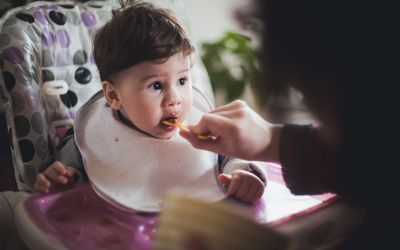 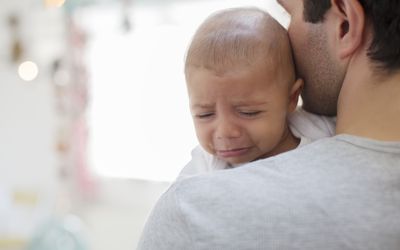 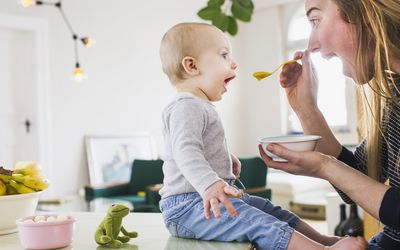 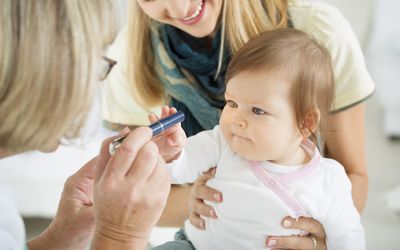 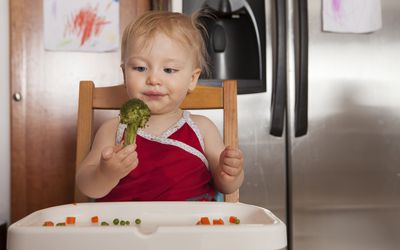