If you are living with pain, adding herbs to your regimen may help to ease your discomfort, especially when combined with regular exercise, diet, and relaxation techniques.

Inflammation is at the root of many pain-causing conditions such as arthritis, back pain, and tendonitis. Long-term inflammation puts you at risk factor for chronic diseases like cancer, cardiovascular disease, and diabetes.

Inflammation is the body's natural response to infection, injury, or illness. The immune system sends chemicals in the bloodstream to the area where you've been hurt or infected. These chemicals create "good" inflammation to protect your body from foreign invaders like bacteria and viruses.

Sometimes, though, the body sends these chemicals when you don't have a problem. Other times, the inflammatory process lasts longer than it needs to. This "bad" type of inflammation, called chronic inflammation, is associated with long-term pain or health problems.

This article looks at six herbs that are often used for natural pain relief. It explains scientific research related to specific health claims and warnings about when you should avoid using herbal treatments.

Containing an aspirin-like compound known as salicin, white willow bark has been used for centuries as a natural remedy for inflammation and pain. Research has shown that taking willow bark may be as effective as taking conventional anti-inflammatory medications for the relief of knee pain and musculoskeletal pain.

In addition to salicin, willow bark contains chemicals called polyphenols and flavonoids. These plant compounds are an important part of a healthy diet because they support basic body functions. They also have been shown to significantly reduce inflammation.

Researchers think that the combination of material in willow bark make it effective at treating headache, easing muscle pain, and calming inflammation. It doesn't seem to help with fever, though.

White willow bark may also alleviate acute back pain, joint pain, and osteoarthritis. However, like aspirin, the bark may cause stomach upset, affect kidney function, prolong bleeding time, and increase the risk of bleeding. Also, it shouldn't be used by children.

Boswellia comes from a resin found in the bark of the frankincense tree. Bosellia oil is used in the manufacturing of food, cosmetics, soaps, and drinks. When used medicinally for pain, though, is often taken by mouth as a pill.

Practitioners of Ayurveda, a healing practice from India, have long used Bosellia to relieve joint and muscle pain. Modern scientists have found that there's reason to trust that practice. Studies show that Boswellia can reduce pain and improve mobility in those with osteoarthritis.

Also, a cream made from Boswellia oil has been shown to help ease painful skin damage caused by cancer radiation treatment.

Traditionally used for rheumatoid arthritis, the South African herb devil's claw may also soothe pain resulting from osteoarthritis, tendonitis, and back and neck troubles, according to proponents.

Studies have shown that devil's claw contains powerful pain-relieving and anti-inflammatory properties. It's been shown to improve symptoms of arthritis and pain. People report that taking it has improved their quality of life and ability to live with certain conditions.

Bromelain reduces levels of hormones in the body that control inflammation. These hormones, known as prostaglandins, initiate inflammation and keep it going.

There is research showing brome can benefit people with arthritis and conditions associated with musculoskeletal tension such as temporomandibular joint (TMJ) syndrome. TMJ causes pain around the jaw and surrounding areas including the ears and eyes.

Bromelain may also help those with inflammation related to an accident or physical trauma. It may promote healing in muscles and connective tissues.

Bromelain is extracted from the stems of pineapples. While the meat of the pineapple does contain a small amount of bromelain, it isn't enough to be medicinally helpful. Usually, it's offered as a pill or tablet to people with inflammation or infection.

Curcumin has been shown to reduce pain by acting on the nervous system. Animal-based studies have also shown some preliminary evidence that the spice could control inflammatory proteins called cytokines. When cytokines are not under control, a condition known as a cytokine storm syndrome can occur. This is associated with serious illness and inflammation.

While sipping ginger tea can help relieve cold-related congestion, supplementing with ginger may help to ease the pain. Research indicates that ginger may calm arthritis pain, possibly by lowering your prostaglandin levels.

One 2015 study even suggests that ginger could reduce pain and inflammation as effectively as non-steroidal anti-inflammatory drugs (such as aspirin), although more further research is still needed.

White willow bark, turmeric, and ginger contain natural blood-thinning compounds, so people taking many common medications and supplements and those about to undergo surgery should be careful and discuss these supplements with their doctors.

In studies, several of these have shown true potential to help with arthritis pain and other disorders caused by inflammation. White willow bark, Boswellia, devil’s claw, bromelain, turmeric, and ginger have all shown potential to help ease pain.

However, some are not appropriate for children. There may also be instances where these herbal treatments interact with other medications you take, so always discuss these treatments with your doctor. 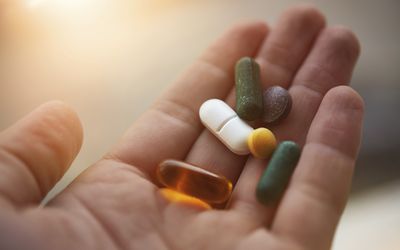 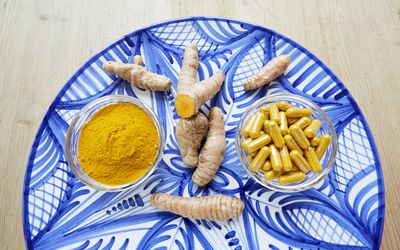 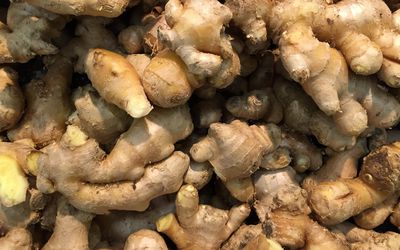 20 Supplements and Vitamins for Arthritis