How HIV Differs From Men by the Stage of Infection

Although the signs and symptoms of HIV are largely the same whether you are assigned female or male, there are several specific to women that can occur during early-stage or later-stage infection.

HIV symptoms in women include:

In 2018, of the 1.2 million Americans living with HIV, an estimated 37,832 were women. Of these, 1 in 9 are thought to be unaware of their HIV status, according to data from the Centers for Disease Control and Prevention (CDC).

From start to finish, acute seroconversion generally lasts for seven to 14 days, during which some people may experience symptoms (referred to as acute retroviral syndrome, or ARS). Symptoms are typically described as being flu-like with mild fever and body ache. Swollen lymph nodes and rash may also accompany.

As many as 43% of people will not experience any signs of acute HIV infection, according to a 2016 study in Emerging Infectious Diseases.﻿﻿﻿

When acute symptoms develop, they are generally the same in women as they are in men. Where they do vary is the rate of seroconversion.

Heterosexual women are twice as likely to get infected per sexual act compared to heterosexual men (due in part to the increased size and porosity of vaginal tissues compared to those of the penis).

These and other factors confer higher rates of new infections among women compared to men—and also translates to faster disease progression.

According to a 2014 review in the Journal of Infectious Diseases, women with HIV have a 1.6-fold greater risk of progressing to AIDS (the most advanced stage of the disease) than men.

Other symptoms may develop during acute seroconversion if there an accompanying sexually transmitted disease (STD). Studies suggest that 1 in 7 people with HIV are co-infected with another STD at the time of their diagnosis. Other studies suggest the HIV/STD co-infection rate may be even higher.

Among women with HIV, the most common accompanying STDs are chlamydia, gonorrhea, trichomoniasis ("trich"), and syphilis. Having these infections—or even non-sexually transmitted ones like bacterial vaginosis (BV)—can increase a woman's risk of getting HIV by two- to three-fold.

These infections undermine the barrier function of the vaginal mucosa and increase the concentration of immune cells at the site of the infection. Among them are CD4 T-cells, the very cells that HIV preferentially targets.

In the case of co-infection, HIV may be identified by the signs and symptoms of the STD rather than those of HIV itself.

It is for this reason that the CDC recommends HIV testing for anyone who seeks the diagnosis and treatment of an STD.

Does Menstruation Increase a Woman's Risk of HIV?

By the end of the acute stage of infection, the immune system brings HIV under control and the virus will establish a set point during which viral activity (as measured by the viral load) will remain stable for months and years.

This chronic stage of infection, referred to as clinical latency, is one in which the infection may progress silently with few notable symptoms. Even so, the virus will continue to infect and deplete CD4 T-cells that the body relies on to fight disease.

Over time, the loss of CD4 T-cells will lead to immunosuppression and an increased risk of opportunistic infections (OIs). They are considered "opportunistic" because an intact immune system would control them.

As the number of CD4 T-cells progressively drops (as measured by the CD4 count), the risk, severity, and range of OIs will increase.

A CD4 count between 500 to 1,200 cells per cubic millimeter (cells/mm3) is considered normal. Any value between 250 and 500 cells/mm3 is a threshold for defining immunosuppression.

Signs and Complications in Women

The symptoms of chronic HIV infection are related to the development of OIs. With that said, secondary conditions affecting a woman's fertility and menstrual cycle can develop as a result of prolonged immune suppression and chronic inflammation.

The type of OIs commonly seen at CD4 counts between 250 and 500 are more or less the same in females and males. These include herpes simplex, herpes zoster (shingles), bacterial pneumonia, bacterial and fungal skin infections, tuberculosis, and HIV-associated meningitis.

The differences, in any, mainly involve a woman's reproductive tract. The symptoms may include:

In addition to symptoms, women with HIV will often experience changes that are only recognized during a pelvic exam. This may include an abnormal PAP smear or signs of cervical dysplasia (a precancerous condition affecting the cervix).﻿﻿﻿

The third stage of HIV infection is acquired immune deficiency syndrome (AIDS), characterized by symptomatic disease. This is the phase where the immune defenses have been all but wiped out, leaving you in an immunocompromised state.

Without the means to defend yourself from common and uncommon diseases, AIDS runs a high risk of severe and potentially life-threatening illness. These include infections and certain types of cancers as well.

According to the CDC, a person is said to have progressed to AIDS when:

AIDS-defining conditions include disease are rarely seen among people who have a healthy immune system. They also involve common OIs that have disseminated (spread) from their typical site of infection to other parts of the body.

According to the CDC, the median time of progression from initial HIV infection to AIDS is 11 years if the condition is not treated.

Does HIV Always Progress to AIDS?

Symptoms of AIDS in Women

The symptoms of AIDS vary little between women and men. There are some variations, including evidence that women with HIV experience greater cognitive decline and may be more likely to experience signs of HIV encephalopathy (a.k.a. AIDS dementia complex) than men.

The one AIDS-defining condition exclusive to women is invasive cervical cancer (ICC). This is the advanced stage of cervical cancer in which tumor cells have spread to tissues deeper within the cervix or to other parts of the body. Though ICC can affect both HIV-positive and HIV-negative women, the incidence among women with HIV is up to seven times greater.

As with other HIV-associated conditions, the risk of ICC increases with declines in the CD4 count. Women with CD4 counts under 200 are six times more likely to get ICC than those whose CD4 counts over 500.﻿﻿﻿

Arguably more concerning is the fact that the incidence of ICC among women with HIV has remained largely unchanged since the 1990s. This is unlike other AIDS-defining conditions that are rarely seen today due to the advent of combination antiretroviral therapy.﻿﻿﻿

Though the reasons for this remain unclear, some studies have suggested that women with HIV are more likely to be infected by less prevalent high-risk strains of HPV that current vaccines cannot protect against.﻿﻿﻿

In addition to HIV-related conditions, there are a number of non-HIV-related illnesses commonly seen in people with long-term infection. These include cancers and aging-related diseases that develop an average of 10 to 15 years earlier in people with HIV than those without.

Under the burden of chronic inflammation, the body tissues can undergo changes that literally age them, leading to a phenomenon knows as premature senescence. Particularly if left untreated, HIV can increase the risk of non-HIV-related cancers and cardiovascular diseases, including heart attacks and strokes.

In some cases, women are disproportionately affected. Studies suggest, for instance, that women with HIV have a higher risk of heart disease than men due to the activation of white blood cells called monocytes that promote cardiovascular inflammation.

Non-AIDS-defining cancers are the leading cause of death in people with HIV in the developed world, according to research published in the Journal of the International AIDS Society.

Although certain symptoms may suggest you have HIV, the absence of symptoms should not be considered an all-clear flag. Today, an estimated 1 in 7 Americans living with HIV remain undiagnosed, either because they have no idea they have been infected or are ignoring their suspicions.

If diagnosed and treated early, people with HIV can live long, healthy lives and reduce the risk of HIV-related and serious non-HIV-related illnesses by up to 72%.

The U.S. Preventive Services Task Force currently recommends at least one HIV test for all Americans 15 to 65 as part of a routine medical exam. If you have risk factors for HIV and have not been tested, there may be no better time to do so than now.

How HIV Is Treated
29 Sources
Verywell Health uses only high-quality sources, including peer-reviewed studies, to support the facts within our articles. Read our editorial process to learn more about how we fact-check and keep our content accurate, reliable, and trustworthy. 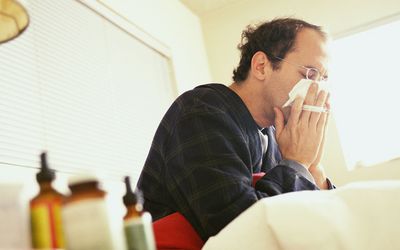