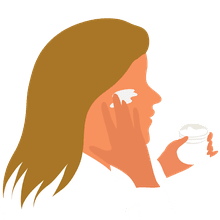 Home remedies for eczema can be an important part of your overall treatment plan. Some may help improve skin hydration and alleviate some of the side effects of this common skin disorder, including itching and redness. Despite there being are a plethora of natural remedies marketed for the treatment of eczema—both topical and oral—there is often little scientific evidence to support the claims.

This is not to suggest that natural remedies have no place in your treatment plan. You simply need to use your best judgment and work with your dermatologist to ensure the remedy neither causes you harm nor interacts with any of your other medications or treatments.

How to Treat and Prevent Eczema

Although frequent bathing can promote dryness and make your eczema worse, it doesn't mean you should avoid bathing altogether. Bathing for less than 15 minutes during an acute flare can help wash away irritants, germs, and allergens that can trigger eczema flares.﻿﻿ There are even bath additives you can try that may help promote healing of dry, inflamed skin.

Believe it or not, one of the most common bath additives is bleach, which some studies suggest is effective in alleviating acute symptoms when diluted in lukewarm water.

To make a bleach bath, simply mix one-half cup of household bleach to a full standard tub of lukewarm water (roughly 40 gallons). Soak for no more than 10 minutes and rinse off afterward with warm water.

A 2018 review of studies in the journal Dermatitis concluded that bleach baths were not only effective at reducing symptoms of eczema but did so without compromising the barrier function of the skin.﻿﻿

Adding oatmeal to bathwater may be also useful, with some studies suggesting that one tablespoon of colloidal oatmeal (found in many health food stores) added to a standard tub of water may help restore the barrier function of eczematous skin.﻿﻿

Rather than buying expensive colloidal oatmeal preparations, you can make your own by pulverizing regular oatmeal in a coffee grinder until powder-like. When mixed with water, the oatmeal should not be clumpy or grainy but rather turn the water milky.

The primary aims of topical remedies for eczema are to improve skin hydration and provide an emollient barrier in which moisture is trapped in the outermost layer of skin (called the stratum corneum). There are several natural products that deliver these benefits to varying degrees.

Coconut oil is a favorite topical treatment for eczema because it is inexpensive and readily available. Coconut oil also has emollient properties that some studies suggest are superior to mineral oil.﻿﻿

Coconut oil is said to have anti-inflammatory and antibacterial properties that may relieve eczema symptoms and prevent secondary infections.﻿﻿ Unfortunately, most of the evidence supporting its use is based on test tube studies rather than human trials.

Coconut oil applied topically is generally well tolerated. However, it can be mildly comedogenic, meaning that it can clog pores and lead to blackheads and acne.﻿﻿

People who are allergic to coconut, walnuts, or hazelnuts should avoid the use of coconut oil, especially on the face.﻿﻿

Will Coconut Oil Clear Your Acne?

Lanolin, also known as wool grease or wool wax, is an oily wax secreted by the sebaceous glands of wool-bearing animals. Lanolin, most of which is derived from sheep, can be purchased online in its natural form. Some people mix one-part sweet almond oil (a neutral carrier oil) with three-parts beeswax and 12-parts lanolin to make a homemade salve.

Although a number of studies have shown lanolin to be safe and effective on normal skin, there have been few that examined its use on eczematous skin.﻿﻿ Moreover, a 2018 study in Contact Dermatitis found that people with eczema are far more likely to develop lanolin allergy than people in the general population.﻿﻿

Chamomile is one of the oldest and widely used medicinal plants in the world. Alternative practitioners often prescribe it to treat topical inflammation such as eczema.

The evidence supporting the topical use of chamomile is sparse, although a 2020 study in Expert Opinion on Drug Delivery reported that chamomile delivered in a nanoemulgel formulation (an emulsion contain nanometer-sized particles) was effective in healing eczema lesions in rats.﻿﻿

Chamomile tea is often cooled and used as a topical remedy for eczema. However, it should be used with restraint as it may cause allergic contact dermatitis in some.﻿﻿

Do not apply chamomile topically if you are allergic to chamomile or any member of the daisy (Asteraceae) family.

Licorice root (Glycyrrhiza glabra or Glycyrrhiza uralensis) has long been used in naturopathic medicine to reduce skin inflammation and irritation. Research published in the International Immunopharmacology concluded that a specific compound in licorice, called glycyrrhetinic acid, was useful in treating eczema—at least in mice.﻿﻿

There is some evidence that topical preparations containing glycyrrhetinic acid can help reduce the severity, duration, and frequency of eczema flares in humans.﻿﻿

Despite the potential benefits, glycyrrhetinic acid is known to raise blood pressure and cause heart or muscle problems when consumed in excess.﻿﻿ While the topical use of licorice root is presumed to be safer, you may still want to speak with your doctor before giving it a try.

The 9 Best Over-the-Counter Eczema Creams of 2020

A number of natural oral remedies are used by alternative practitioners to reduce the underlying inflammation that drives eczema. As with the aforementioned topical remedies, the evidence supporting their use is sparse.

Evening primrose oil is extracted from the seeds of evening primrose (Oenothera biennis), a plant native to North America. The oil contains high concentrations of a naturally occurring compound called gamma-linolenic acid (GLA), which helps mediate inflammation in the body.

Alternative practitioners contend that GLA deficiency—a major factor in the development of eczema—can be treated with a daily dose of evening primrose oil and, in doing so, temper the inflammation that drives eczema flares.﻿﻿ Borage oil, also rich in GLA, is said to offer the same benefits.

Clinical studies supporting these claims are weak. According to a 2014 review published in the Cochrane Database of Systematic Reviews, there was no clear evidence that either evening primrose oil or borage oil altered the course of eczema in any of the reviewed studies.﻿﻿

Probiotics are "good" bacteria that help maintain a healthy balance of microorganisms in the digestive tract. They can also be found in supplement form as well as in fermented foods like yogurt, kefir, sauerkraut, and kimchi.

Some scientists believe that babies born with an overreactive immune system have a different composition of bacteria in their digestive tract. It is hypothesized that eczema—a disease characterized by an immune overactivation—can be relieved or avoided if imbalances are corrected. There is some evidence to support the claims.

A 2018 review of studies published in PLoS Medicine suggested a direct association between a mother's diet and the incidence of immune-modulated diseases like eczema in newborns. According to the researchers, probiotics given to mothers during late pregnancy appeared to reduce the risk of eczema in their children.﻿﻿

In stark contrast, a 2017 study in Pediatrics found that infants provided a daily probiotic (Lactobacillus rhamnosus GG) for the first six months of life were just as likely to develop eczema by the age of 2 as any other child.﻿﻿

This suggests that the underlying immune overreaction in children with eczema is more or less "set" by the time of birth and that the benefits of probiotics in preventing eczema may be limited thereafter.

Some experts contend that dietary supplements such as fish oil, zinc, selenium, vitamin D, vitamin E, and pyridoxine (vitamin B6) can promote skin health in people with eczema. In the same vein, increasing your intake of foods rich in these nutrients, such as fatty fish, whole grain, nuts and seeds, and eggs, is believed by some to be just as effective.

While there can be little doubt that these foods and nutrients are healthy, a 2012 Cochrane review found no convincing evidence that any of these supplements improved symptoms or reduced the frequency of flares in people with eczema.﻿﻿

Of the studies reviewed, there was scant evidence that fish oil may relieve some of the itchiness associated with the disease, but the studies were far too small to draw any definitive conclusions.

Stress is known to trigger eczema flares, so every effort should be made to manage stress on a daily basis.﻿﻿ You can do so by exploring mind-body therapies increasingly embraced by medical practitioners in the West.

These include practices such as:

Regular exercise can also elevate mood and alleviate stress, in part by stimulating the production of the "feel-good" hormone endorphin.

It is not uncommon to use a variety of treatments to keep your eczema under control. This may involve over-the-counter moisturizers and hydrocortisone creams or stronger prescription drugs. If you decide to incorporate complementary therapies into your treatment plan, let your doctor know so that they can preemptively identify or monitor for side effects or drug interactions.