How to Use an Internal Condom

But there are other benefits of internal condoms that may make them attractive for both partners.

The internal condom was first approved for use by the U.S. Food and Drug Administration (FDA) in 1993. It was regarded as a novel and effective addition to the tools commonly used to prevent pregnancy and the transmission of sexually transmitted infections (STIs).

Among the many advantages of the internal condom:

Can I Skip Condoms If I'm on the HIV Prevention Pill?

The consumer uptake of the internal condom has not been as robust as some public health experts had hoped for. Arguably its biggest disadvantage is that it is different.

Unfamiliarity with internal condoms, combined with their general lack of availability, can make people reluctant to try them out. They also can represent a shift in the sexual dynamics of a relationship that can also make some people uncomfortable.

Despite resistance from consumers, studies have shown that greater awareness about internal condoms, including how to use them properly, increases uptake even in low-income communities where condom usage is generally low. Even so, the cost of an internal condom can place them well out of reach of some consumers.

Depending on the brand you use, an internal condom can cost anywhere from $3 to $10 each. Compare this to a standard 12-pack of Trojan external condoms that retail for $8, and you can see why uptake remains challenging.

How to Use an Internal Condom

It can be a bit intimidating to figure out how to use the internal condom the first time. Here is a step-by-step guide to help you through the process:

How Effective Are Condoms in Preventing Pregnancy?

Using the internal condom requires the cooperation of both partners. Taking your time and practicing when first starting out makes things easier.

Another thing to avoid is using an internal condom with an external condom ("double-bagging"). The friction between the condoms can cause one or both of them to tear.

Internal condoms should never be reused.

What to Do If a Condom Breaks

The fact that internal condoms are not popular should not deter you from using them. Irrespective of their cost, they work.

For receptive partners at high risk of exposure to STIs such as HIV, they offer protection even if your partner is unwilling to use external condoms. For this reason alone, internal condoms may be well worth the investment.

When a Woman Doesn't Want to Use an External or Internal Condom
7 Sources
Verywell Health uses only high-quality sources, including peer-reviewed studies, to support the facts within our articles. Read our editorial process to learn more about how we fact-check and keep our content accurate, reliable, and trustworthy. 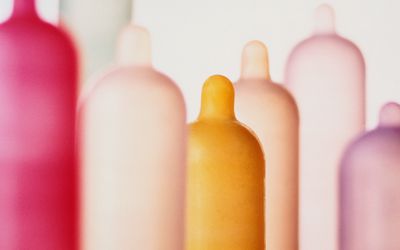 What Is Oral Sex?
What Is Lube?

What Is a Polyurethane Condom?