The Link Between Inflammation and Heart Disease

Cardiovascular disease (CVD) is a serious condition caused by the buildup of cholesterol plaques in blood vessels (atherosclerosis), which lead to stroke, heart attack, and peripheral artery disease.

Some well-known risk factors of CVD include high blood pressure, high cholesterol, and smoking. But it's recently become understood that inflammation plays a big role in atherosclerosis as well.

This article discusses inflammation's role in heart disease and ways to combat it.

Inflammation is an important part of the immune response, the body's protective mechanism against infection and injury. The immune system defends the body against pathogens like viruses, bacteria, and parasites. Various cells and proteins are involved in complex signaling pathways in the inflammatory response.

Inflammation can be acute or chronic. Acute inflammation, such as allergic reactions or responses to an infection or injury, is a vital protective mechanism. But when inflammation is chronic, as in autoimmune disease, toxin exposure, and even stress, it can create a host of problems.

People can live with chronic inflammation without even knowing it, and symptoms can be vague.

We experience acute inflammation as a localized reaction to trauma or infection. Think of the last time you cut your finger or had a pimple. Inflammation is responsible for the resulting redness, swelling, warmth, and pain. This happens because blood vessels in the affected area dilate and become leakier. Immune cells can then come in and clear up pathogens and toxins to start the healing process.

Levels of inflammation can be measured through blood markers. General measures of overall inflammation include:

Link Between Inflammation and Heart Disease

In recent years, the role of inflammation in heart disease has been a topic of interest to scientists.

Researchers are investigating the role that anti-inflammatory medications may have in preventing heart disease.

The anti-inflammatory diet is also a topic of great interest and has shown a promising link in decreased heart disease risk.

Psoriasis is a skin condition that causes itchy, scaly skin patches that come and go. Some people also develop inflammation in their joints, called psoriatic arthritis. However, inflammation in psoriasis goes beyond the skin and joints.

Studies have shown that people with psoriasis have higher rates of cardiovascular disease. Inflammation in psoriasis causes insulin resistance, endothelial dysfunction, and activation of platelets, all of which contribute to heart disease.

It remains to be seen how effective current psoriasis treatments are at lowering excess cardiovascular risk. Studies have shown that treatment of psoriasis with certain anti-inflammatory medications called TNF-alpha inhibitors are associated with lower rates of heart attack and stroke.

Ongoing research is investigating the effect of other treatments on heart disease risk in psoriasis.

Similar to psoriasis, rheumatoid arthritis (RA) is an autoimmune disease that causes inflammation. RA mainly affects the joints, but people with this inflammatory disease have up to twice the rates of certain forms of heart disease and stroke.

Interestingly, the severity of rheumatoid arthritis is related to the risk of heart disease. Those with worse RA symptoms have higher rates of heart attacks and strokes than people with mild symptoms.

Systemic lupus erythematosis, called lupus for short, is another autoimmune condition that causes a variety of symptoms throughout the body. People with lupus may develop skin rashes, kidney problems, joint pain and swelling, and changes in blood counts.

High blood pressure, diabetes, and high cholesterol, which increase the risk of heart disease, are more common in people with lupus. But the higher risk of heart disease in lupus cannot be explained by these risk factors alone. As in psoriasis and RA, inflammation appears to be a major culprit, leading to more heart attacks, strokes, and peripheral artery disease.

Furthermore, lupus can affect the heart valves and cause inflammation in the protective sac around the heart called the pericardium (pericarditis) and the heart muscle itself (myocarditis).

Human immunodeficiency virus (HIV) is an infection that impairs the immune system and causes chronic inflammation.

The exact cause of inflammation in HIV is unclear, but it has long been known that HIV infection results in a higher risk of heart disease. Unfortunately, even when HIV is controlled with medications that bring the viral load to undetectable levels, levels of inflammation remain higher than normal.

In addition, medications used to treat HIV can contribute to heart disease risk. Side effects of some antiretroviral medications include high cholesterol, high blood pressure, and insulin resistance.

Other Causes of Inflammation

In addition to being triggered by autoimmune diseases and infection, chronic inflammation can have many other causes. The following have been linked to inflammation:

While some conditions cause obvious inflammation, people without a diagnosis of inflammatory disease may also have chronic inflammation without knowing it. We all come into contact with foods that cause inflammation and chemicals in plastics and the environment that researchers are now linking to endocrine disruption and inflammation.

Since chronic inflammation has negative effects throughout the body, particularly for heart health, what are some ways to lower it? In people with inflammatory conditions, certain medications can help. But everyone can benefit from lifestyle changes, which can include incorporating an anti-inflammatory diet.

We know that inflammation contributes to heart disease, but the role of anti-inflammatory medications in lowering cardiovascular risk is less clear.

Compellingly, statins, the class of medications most often used for preventing heart attacks and strokes, have anti-inflammatory properties. This is one explanation for how statins can lower cardiovascular risk beyond their cholesterol-lowering effect.

Guidelines from the American College of Cardiology and American Heart Association recommend that healthcare providers consider chronic inflammatory conditions like RA, lupus, and psoriasis as "risk enhancers" for cardiovascular disease. Those with these conditions have a lower threshold and should be considered for cholesterol-lowering medications (statins) to lower their risk of heart disease.

Furthermore, some specific anti-inflammatory medications have shown promise in preventing heart disease. This is an area that researchers are investigating with the hope of improving our understanding of inflammation and CVD and potentially targeting specific inflammatory pathways to prevent heart disease.

One important study called the CANTOS trial looked at the monoclonal antibody drug called canakinumab. This medication targets a specific pathway to decrease inflammation. In people who had previously had a heart attack, canakinumab decreased the risk of a stroke or second heart attack.

Additionally, the COLCOT trial demonstrated that low-doses of the anti-inflammatory medication colchicine given after a recent heart attack was associated with less cardiovascular events.

Anti-inflammatory medications aren't a magic bullet for preventing heart disease, though. A study of low dose methotrexate (a drug commonly used in treatment of RA) did not show lower rates of heart attack or stroke.

Combatting inflammation can be helpful to those with autoimmune disease, but everyone can benefit from some lifestyle changes that decrease inflammation. This includes moderate exercise and an anti-inflammatory diet.

Many studies have shown that regular moderate-intensity exercise has an anti-inflammatory effect and lowers levels of CRP and other inflammatory markers.

The American Heart Association recommends 150 minutes of moderate-intensity exercise weekly. But for those with a sedentary lifestyle, even increasing physical activity by a small amount can be beneficial.

While some foods like red meat and refined sugars increase inflammation, other foods have the opposite effect and actually lower levels of inflammation.

Evidence from a large 2020 study demonstrated that eating a diet higher in foods that promote inflammation was associated with increased risk of heart disease. The study showed that anti-inflammatory foods, which are high in antioxidants, polyunsaturated fatty acids, and fiber, are more protective against heart disease.

The following foods are part of an anti-inflammatory diet, which can benefit everyone:

Inflammatory foods to avoid include:

Research demonstrates a link between inflammation and heart disease. People with conditions that increase inflammation have a higher risk of cardiovascular disease. Some treatments for inflammatory conditions have a beneficial effect on heart disease risk, while others may have harmful effects like increasing blood pressure, blood sugar, and cholesterol. Everyone can benefit from the anti-inflammatory effects of moderate exercise and a nutritious diet.

Everyone experiences inflammation to some degree. Decreasing inflammation through lifestyle changes like exercise and an anti-inflammatory diet can have beneficial effects on levels of inflammation. It can also help control other heart disease risk factors like high cholesterol, high blood pressure, and diabetes. 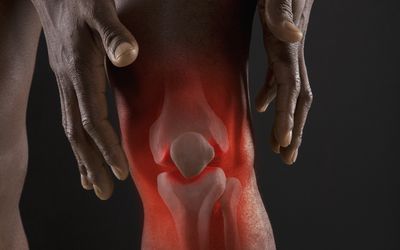 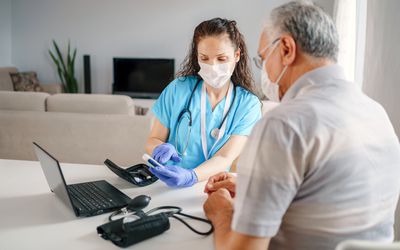 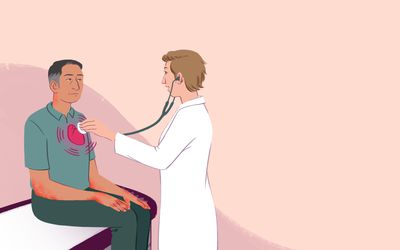 The Link Between Psoriatic Arthritis and Heart Disease 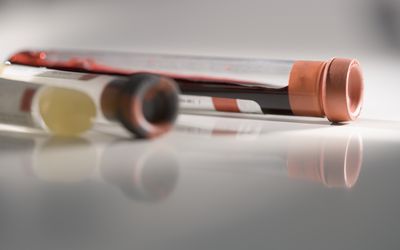 What Is a C-Reactive Protein (CRP) Test?