What Is KRAS G12C Mutation in Non-Small Cell Lung Cancer?

Heidi Moawad, MD
Heidi Moawad is a neurologist and expert in the field of brain health and neurological disorders. Dr. Moawad regularly writes and edits health and career content for medical books and publications.
Learn about our editorial process
Medically reviewed by Doru Paul, MD

The KRAS G12C mutation is the most common genetic abnormality associated with non-small cell lung cancer (NSCLC). The detection of this biomarker can provide insight into the prognosis of the disease, as well as its response to treatment.

This mutation is believed to develop as a result of genetic alterations that occur in the body due to smoking. The KRAS G12C gene abnormality induces growth and proliferation of cancer.

Lung cancer can develop slowly, and it often doesn’t cause symptoms until the disease reaches late stages. Symptoms of advancing NSCLC can include weight loss, fatigue, shortness of breath, chest pain, coughing up blood, bone pain, and headaches.

The symptoms of all types of lung cancer, including NSCLC, are more likely to develop as the cancer grows and invades the lungs or metastasizes (spreads to other areas of the body). For example, lung cancer can grow into the lung tissue, resulting in bloody sputum when you cough. Or it can spread to the bones, causing bone pain and increasing the risk of bone fractures. And cancer may increase the metabolic demands on the body, resulting in weight loss and generalized weakness.

Generally, NSCLC doesn’t cause substantially different symptoms than other types of lung cancer. And your cancer symptoms are unlikely to provide clues that you could have a KRAS G12C mutation. However, as the condition worsens, NSCLC associated with the KRAS G12 mutation can have a worse prognosis than some other lung cancer types. And this type of cancer does not typically improve with certain chemotherapeutic medications used for treating NSCLC.

For example, the KRAS G12C mutation is a predictor that epidermal growth factor receptor (EGFR) mutations are absent and, therefore, tyrosine kinase inhibitors (TKI) targeting EGFR—which are approved in the treatment of NSCLC—will not be effective. These aren’t obvious clinical symptoms of the mutation, but they are complications of having the mutation.

Smoking, secondhand smoke, and inhaled toxins are the most commonly recognized causes of lung cancer. Most lung cancer, including adenocarcinoma of the lung and squamous cell carcinoma of the lung, are described as NSCLC. The cancer cells that grow in the lungs when a person has NSCLC are not the type of cell that is described as small cells, which is why it is called “non-small cell.”

There are a number of causes of NSCLC, and genetic changes in the cells are among the well-recognized causes. The KRAS gene is located on chromosome 12. It is an oncogene. An oncogene is a gene that can cause cancer to develop.

This type of chromosomal alteration leads to cancer because it results in abnormalities in the production of proteins that are directed by the KRAS G12C gene. The proteins that are altered by this particular mutation normally regulate cell growth, division, and survival. The specific protein irregularities caused by the mutation often lead to the type of abnormal cellular growth that is associated with cancer.

Lung cancer is diagnosed with a combination of tests. Imaging tests of the chest, such as X-ray and computerized tomography (CT), can often identify cancerous growth in the lungs. Other tests, such as a bone scan or brain magnetic resonance (MRI) imaging tests, may identify metastasis. Often, these tests don’t distinguish between small cell lung cancer and NSCLC, and they can’t identify the KRAS G12C mutation.

A lung biopsy can differentiate NSCLC from other types based on the microscopic appearance of the cancer cells. If you have a biopsy, your healthcare providers will likely use a bronchoscopy procedure to obtain the sample of your lung tumor.

A bronchoscope is a medical device that is placed into your lungs so your healthcare providers can see the tissue and take a biopsy sample. You would have some type of anesthesia during your procedure.

If your medical team wants to determine whether you have a KRAS G12C mutation, a genetic test can be used to evaluate the cells obtained from your biopsy.﻿﻿

In addition to identifying the cell type and the mutation, your NSCLC diagnosis includes an assessment of the cancer grade and stage. The grade is an evaluation of the aggressiveness of the cells and the likelihood of metastasis (based on their appearance under a microscope), while the stage describes the size of the cancer and how far it has spread.

There are several treatment strategies used for lung cancer. Your treatment depends on a number of factors, such as the size of the tumor, the extent to which it has spread, and whether you have other medical conditions. Treatments include surgical removal of the tumor, chemotherapy, radiation therapy, and targeted therapy.

In 2021, the Food and Drug Administration approved Lumakras (sotorasib) for the treatment of NSCLC in those with the KRAS G12C mutation who have already received systemic therapy.This is the first approved targeted therapy for this specific mutation.

A number of clinical trials researching the effects of other KRAS G12C inhibitors for the treatment of NSCLC are currently taking place.

The products being studied are described as covalent direct inhibitors that target KRAS G12C. The inhibitors bind to the mutated gene to have their anti-cancer effect. These KRAS G12C inhibitors work to inactivate the gene so that it will no longer continue to direct the production of cancer-causing proteins.

Preliminary studies are promising, and several pharmaceutical companies are working on the development of possible drugs that could be available within upcoming years for people who have NSCLC with KRAS G12C mutations.

If you have been diagnosed with lung cancer, it can be frightening to think about your prognosis and treatment. You will need diagnostic testing to determine the type, stage, and grade of your cancer.

Your treatment plan may include a number of approaches that can be used together to help optimize your outcome. If you have NSCLC with a KRAS G12C mutation, your treatment will be designed around the best management of this specific type of cancer. 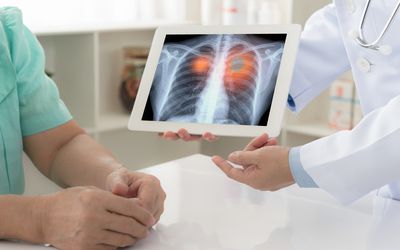 What Is KRAS-Positive Lung Cancer? 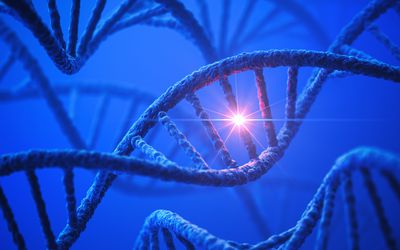