Lung cancer often spreads to the lymph nodes before spreading to other parts of the body. Which groups of lymph nodes are involved, and where these are in relation to the primary (original) tumor, are important factors in determining the stage of cancer and how it should be treated.

If you read the report of a scan or biopsy, you may see the phrase "metastatic to lymph nodes." But having lung cancer in the lymph nodes, meaning it has metastasized (spread) to them, does not mean that you have metastatic cancer.

Even some early-stage cancers, like some stage 2A lung cancers, have positive lymph nodes but are in no way metastatic. In the TNM staging system, lymph node involvement is classified as stage N1 and up.

With that said, the presence of cancer in lymph nodes tells doctors that the tumor intends to spread and that more aggressive treatment may be needed to reduce the risk of recurrence.

Lung cancer can directly invade nearby tissues. It can also spread as cancer cells break off from the primary tumor and are transported through one of three systems:

By traveling through the lymphatic system, lung cancer cells are carried to lymph nodes that act as filters for body wastes, toxins, and other harmful substances. Lymph nodes are clustered throughout the body, the groupings of which are classified by their location.

Lymph nodes often serve as the "firewalls" for cancer as cells are shed from the primary tumor.

When the spread is limited to nearby (regional) lymph nodes, the cancer can be described as locally advanced.﻿﻿

If the lung cancer has spread beyond regional lymph nodes and is found in distant lymph nodes or other tissues, the disease is considered metastatic.﻿﻿

How Fast Does Lung Cancer Spread?

When cancer has spread to regional lymph nodes, they are classified by their location in and around their lungs. The location plays a key role in the staging of lung cancer.

For the purpose of staging, regional lymph nodes are divided into three groups:

Another way that lymph nodes are classified is by the side of the body where they are located:

You will often not have any specific symptoms indicating that cancer has spread to your lymph nodes. If you do, they may include:

Beyond that, any symptoms you have may be related to lung cancer in general. Early signs may include:

After lung cancer is diagnosed, your physician will order tests to see if your tumor has spread to lymph nodes or distant sites.

Determining which, if any, lymph nodes in your body are affected by cancer is important in selecting the best treatment options for you as an individual. It can be an arduous and stressful process but one that can ensure you are neither undertreated nor overtreated.

In the past, mediastinoscopy was the procedure most commonly used to diagnose lung cancer. But, because mediastinoscopy is an invasive surgical procedure, it has been largely replaced by PET scans that are less invasive and nearly as sensitive.

Whether or not lung cancer is in your lymph nodes is one of the factors used in staging the cancer. It is part of a classification system called TNM staging which categorizes cancer by the size of the primary tumor (T), the number and location of regional lymph nodes (N), and the presence or absence of metastasis (M).

Lymph nodes are classified by the numbers 0 to 3 or the letter "x" as follows:

While each advancing number in the N value describes a progression of the disease, it does not indicate metastasis. Metastasis is only represented in TNM staging by the M values, either with M0 (no metastasis) or M1 (metastasis).

The specific criteria for lymph node classification are described in the 7th edition of Lung Cancer Staging issued by the American Joint Committee on Cancer.

The treatment for lung cancer that has spread to lymph nodes depends upon the stage of cancer and your general health.

If lung cancer has spread to only a few nearby lymph nodes, surgical treatment may be considered. The procedure, referred to as selective lymph node dissection (SLND), aims to remove affected lymph nodes and preserve those that are free of cancer.

SLND is typically used for N1 disease but can also be used as a preventive measure in people with N0 disease.

Prior to the SLND procedure, a PET scan will be performed with or without an accompanying CT scan with contrast. This helps the surgeon pinpoint which lymph nodes are affected. The surgeon can then decide which to remove based on the pattern of lymph node drainage. To be safe, the surgeon will usually remove several unaffected lymph nodes just beyond the boundary of the affected ones.

SLND typically requires a two- to three-day hospital stay. Bleeding and pain are common after the surgery, but infection is rare.

After the lymph nodes are removed, radiation therapy may be used to kill any remaining cells and prevent a recurrence.

Additional lung cancer therapies may also be prescribed based on the stage of cancer. These include:

SLND is rarely if ever used when there are numerous affected lymph nodes. In such cases, standard therapies will be pursued.

On their own, the N values in the TNM system only provide a glimpse of the long-term outcomes of cancer. It is only by comparing lymph node involvement with the characteristics of the primary tumor and the presence or absence of metastasis that a doctor can provide you with a reasonable prognosis.

With that said, a 2016 study in the Journal of Thoracic Diseases described certain characteristics of lung cancer in the lymph nodes that may indicate better or poorer outcomes:

Five-year survival is a standardized measure used by doctors to predict how many people are likely to survive at least five years following the cancer diagnosis. This is broken down by whether the disease is localized (confined to one lung), regional (involving regional lymph nodes or nearby tissues), or distant (metastatic).

The five-year survival rate for lung cancer is broadly defined by the National Cancer Institute (NCI) as follows:

It is important to become part of this process as a partner in your own care. If there is something you don't understand, let the doctor know. By understanding as much as you can about your diagnosis and treatment, you can make more informed choices and feel more in control of your condition.

If, on the other hand, you are not getting the information you need to make an informed choice, do not hesitate to seek a second opinion from a qualified oncologist.

Coping and Living Well With Lung Cancer
15 Sources
Verywell Health uses only high-quality sources, including peer-reviewed studies, to support the facts within our articles. Read our editorial process to learn more about how we fact-check and keep our content accurate, reliable, and trustworthy. 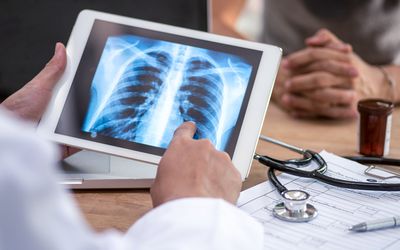 How Lung Cancer Progresses & What to Expect