When Lung Cancer Spreads to the Liver

Lung cancer spread (metastatic) to the liver is sadly too common. Nearly 40% of people with lung cancer have metastases to a distant region of the body at the time of diagnosis. What can you expect if your lung cancer has spread to your liver? The answer is changing rapidly as medicine advances, so it's important to be aware of newer treatment options now available.

Lung cancer can spread to any region of the body, but most commonly spreads to the liver, the lymph nodes, the brain, the bones, and the adrenal glands.

Oftentimes, lung cancer will spread to more than one area of the body. For example, it's common to have both liver metastases and brain metastases.

If lung cancer has spread to your liver, you may not have any symptoms at all. In fact, the spread (metastasis) is often discovered when a test, such as a CT scan or PET scan, is done to determine the stage of your cancer.

If you do have symptoms, these may include pain under your ribs or in your abdomen on the right side of your body, and general symptoms, such as loss of appetite and nausea. If you have many tumors in your liver or if the metastasis is large enough to obstruct your bile ducts, you may develop jaundice—a yellowish discoloration of your skin and the white part of your eyes.

Liver metastases also disrupt the metabolism of bile, causing a build up of bile salts in the skin. This can result in severe and frustrating itching.

Tests that may be performed to look for liver metastases from lung cancer include:

Uncertainty of Liver Findings Is Common

It is important to note that abnormal findings are quite common when scans are done of the liver, and sometimes it can be hard to determine if a spot or spots on the liver are due to the spread of cancer or another (benign) cause. If your healthcare provider is uncertain whether or not an abnormality in your liver is related to your cancer, and the treatment approach would vary depending upon the results, he or she may recommend a liver biopsy in order to look at the tissue to be certain of your diagnosis.

It can be frustrating if your healthcare provider is uncertain about findings in your liver, and this can make you feel anxious and unsure of your care. It may be helpful to know that this is common and that there is a lot of overlap between "normal" abnormalities in the liver and liver metastases.

Historically, the treatment of lung cancer that has spread to the liver was mainly palliative, meaning that the goal of treatment is to relieve symptoms rather than to attempt to cure the disease. This is changing, and there are now several options that may both reduce symptoms and extend life for many people with liver metastases.

General treatments for metastatic lung cancer (stage 4 non-small cell lung cancer or extended stage small cell lung cancer) may reduce the size of a tumor in the lungs as well as liver metastases. For those who have brain metastases, this can be confusing. The brain is surrounded by a tightly woven network of capillaries referred to as the blood-brain barrier. This helps to prevent toxins (such as chemotherapy drugs) from entering the brain. Treatments such as chemotherapy do, however, readily reach the liver. Options can include the following:

In recent years, treatment designed to debulk liver metastases or even to remove them with a curative approach has become much more common. External beam radiation may be used as a palliative treatment when many metastases are present to improve quality of life.

For those with oligometastases, defined as only a single or a few "spots" of metastatic disease, especially those who have a targetable mutation on gene profiling, two primary radiation techniques have been shown to improve outcome in a select subset of patients. When liver metastases occur in a patient who is otherwise stable on targeted therapy, it's thought that these new sites represent "rogue" sites, and an attempt to eradicate the metastases while continuing the targeted therapy is sometimes considered. Techniques include the following:

Compared to surgery, both of these procedures (termed a metastasectomy) are relatively low risk and have high rates of metastatic control. With SBRT, early results have shown an improved median survival (time at which half of the people are alive and half have died) and approximately 25% long-term survival in carefully selected patients. Clinical trials are in progress to further evaluate the benefit of metastasectomy for oligometastases with liver cancer, and a paradigm shift in the treatment of this condition is taking place.

People who have better outcomes with this type of treatment include those with fewer metastases, those who are treated for all known cancerous sites, and those who have longer disease-free intervals.

Other techniques that may be used for a single or only a few liver metastases include the following:

When people hear that they have liver metastases from lung cancer, one of the first questions is often "what is the life expectancy?"

The answer depends on many factors, including the extent of the metastases, the status of cancer in the rest of the body, general health, mutation status, and more.

The presence of liver metastases has also been linked to a poorer prognosis in people with non-small cell lung cancer treated with Opdivo. That said, a study presented at the 2019 meeting of the American Society of Clinical Oncology found that the combination of Tecentriq (atezolizumab), Avastin (bevacizumab), and two chemotherapy drugs improved both progression-free and overall survival in people with liver metastases.

With regard to limited liver metastases (oligometastatic disease) that can be treated, the overall survival rate is still unknown, though there are cases of long-term survival following these treatments. For some people, local treatment of liver metastases with SBRT appears to cause changes in the immune system (the abscopal effect) that can result in reduction in tumors in other regions of the body. There are several clinical trials now in process that will hopefully answer this question in the future.

It can be devastating to learn that your cancer has metastasized. And on top of your grief, there are often a hundred things you feel you need to do. First off, keep in mind that treatments for lung cancer are improving—even for the most advanced stages. If you are feeling good and have only a few metastases, talk to your healthcare provider about the treatments now available. There are many new treatments, but these are changing so fast that it can be difficult for anyone who's not an expert to stay abreast of the progress.

When cancer can't be cured or life extended, there are still many options for keeping people comfortable enough to enjoy their last days with loved ones.

Liver metastases with lung cancer are a very concerning finding, but the treatment paradigm is beginning to change. Newer systemic treatments such as targeted therapies and immunotherapies can sometimes control cancers to a greater degree achievable before with chemotherapy alone. Local therapies (liver-metastasis-specific treatments noted above) have also become more common for metastases to the liver and other sites, with a small number of people gaining long-term control of their cancer.

Since the landscape of lung cancer treatment is changing so rapidly, you may wish to consult with more than one expert when making decisions regarding your treatment. A second opinion from a lung cancer specialist at one of the larger National Cancer Institute-designated cancer centers may give you more options. Some centers are now also providing remote second opinions to determine if they have therapies to offer beyond those offered where you are treated. 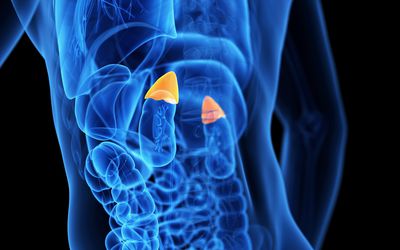 When Lung Cancer Spreads to the Adrenal Glands