Why the Lymph Nodes in Your Chest Might Be Enlarged

Mediastinal lymph nodes are lymph nodes located in the mediastinum. The mediastinum is the area located between the lungs that contains the heart, esophagus, trachea, cardiac nerves, thymus gland, and lymph nodes of the central chest.

The enlargement of lymph nodes is referred to as lymphadenopathy.

Lymph nodes can become enlarged due to infections, cancer, and inflammatory diseases. There are many different causes of mediastinal lymphadenopathy. Conditions that cause inflammation in the chest area, can cause enlargement of the lymph nodes of the chest.

Generally, mediastinal lymphadenopathy is diagnosed with imaging tests, such as chest ultrasound, chest CT, or chest MRI. These tests can provide a non-invasive assessment of the number and size of the lymph nodes. Sometimes the cause of lymph node enlargement might already be known due to the underlying medical conditions (such as TB or ALL).

If the cause of the mediastinal lymphadenopathy is uncertain, your healthcare provider may order a biopsy so the tissue can be examined microscopically and the cause can be identified.

The biopsy results are usually ready in five to seven days.

Lymph nodes are small structures located in clusters throughout the body. They filter toxins and pathogens (infectious organisms).

When the mediastinal lymph nodes are enlarged due to a malignancy, lung cancer and lymphoma are the two most likely causes.

Mediastinal lymph nodes are typically the first ones where cancer cells from the lungs will travel, and this is why they can be examined to determine whether cancer is spreading. In some cases, mediastinal lymph node enlargement occurs due to secondary lung cancer when metastatic cancer spreads from another part of the body to the lungs—and then to the lymph nodes.

The location and number of lymph nodes involved is an important aspect of cancer staging. This classification system defines how advanced the malignancy is, and helps determine which treatments should be administered, and what outcomes can be expected.

The Link Between Cancer and Lymph Nodes

Mediastinal lymphadenopathy occurs in over 85% of Hodgkin lymphoma (HL) cases compared to only 45% with non-Hodgkin lymphoma (NHL). Moreover, the pattern of enlargement tends to be orderly and progressive with HL and more scattershot with NHL.

While chest imaging can identify suspicious-looking lymph nodes, a definitive diagnosis can only be made with a biopsy. 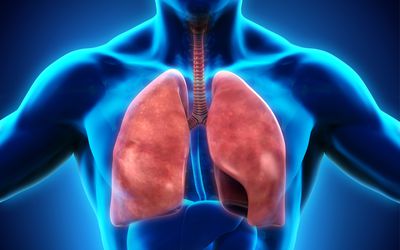 The Mediastinum and Its 3 Main Regions