Moderna to Begin Trials In HIV and Flu Vaccines

The astonishing success of COVID-19 shots may signal a breakthrough in disease prevention technology.

Moderna is developing influenza and HIV vaccines using mRNA technology, the backbone of its effective COVID-19 shots. The biotech company is expected to launch phase 1 trials for its mRNA flu and HIV vaccines this year. If successful, mRNA may offer a silver lining to the decades-long fight against HIV, influenza, and other autoimmune diseases.

Traditional vaccines often introduce a weakened or inactive virus to one’s body. In contrast, mRNA technology uses genetic blueprints, which build proteins to train the immune system to fight off the virus.

Since mRNA teaches the body to recognize a virus, it can be effective against multiple strains or variants as opposed to just one.

“The mRNA platform makes it easy to develop shots against variants because it just requires an update to the coding sequences in the mRNA that code for the variant,” Rajesh Gandhi, MD, an infectious diseases physician at Massachusetts General Hospital and chair of the HIV Medicine Association, tells Verywell.

Future mRNA vaccines have the potential to ward off multiple diseases with one shot, according to the Centers for Disease Control and Prevention (CDC). Current mRNA vaccines, as demonstrated in their use against COVID-19, already appear to be more effective against new variants than traditional shots.

“Based on its success in protecting against COVID-19, I am hopeful that mRNA technology will revolutionize our ability to develop vaccines against other pathogens, like HIV and influenza,” Gandhi says.

Moderna’s flu and HIV vaccines are still in early development stages, having yet to undergo their clinical trials. Still, if they prove successful, the mRNA-based treatment could dramatically change health care—both in expediting the route to immunity and by providing a solution to illnesses that have been around for decades.

Scientists currently make annual alterations to the typical flu shot to keep up with the viruses in circulation. But a successful mRNA shot could provide a far more effective alternative.

An approved mRNA flu vaccine could be administered every other year rather than annually, virologist Andrew Pekosz, PhD, tells Verywell. This is because mRNA accounts for variants and produces a stronger and longer-lasting immune response than that of the current flu vaccine, he says.

The influenza shot is similar to the COVID-19 shot because the viruses have similar characteristics and necessary treatments, according to Pekosz.

Flu strains have been circulating at least since the early 1900s. An mRNA vaccine could potentially target older or less effective antibody response because most people have gotten the flu in the past, Pekosz says.

“There's no way to answer that question except to do some clinical trials, and see what the results tell us,” Pekosz says.

How Can You Prevent Flu During COVID-19? 6 Doctors Offer Advice

Scientists have not developed a cure for HIV since the virus first surfaced 40 years ago. An mRNA vaccine would be a long-awaited breakthrough, but many variables in its development remain unknown.

Data suggests that immunizing people against HIV requires not only antibodies, but also targeting specific T cells, which help coordinate the body’s immune response, he adds.

“[mRNA] is a good platform to try against HIV,” Pekosz says. “But because the immunity that you need to protect from HIV is a little bit different from what you need from flu and COVID-19, it's more important to do the large scale trials to really see how effective it could be.”

Why Have Scientists Waited So Long to Use mRNA?

For decades, researchers have been studying mRNA shots for viruses like Zika, rabies, and even the flu. But the technology hasn't been used on humans until 2020 for COVID-19.

The restraints were largely due to the lengthy testing requirements mandated prior to the COVID-19 pandemic. To curb the spread of the coronavirus, the FDA accelerated vaccine licensure and helped facilitate a timely development of COVID-19 shots.

Virologists like Pekosz say they hope that we can learn from the pandemic and continue to pursue fast-paced, effective vaccine protection.

“COVID-19 showed us what we can do if we want to move a vaccine forward quickly,” Pekosz says, adding that the data from COVID-19 vaccinations may help biotech companies move other candidate vaccines through the pipeline.

Can You Get Two Flu Shots in the Same Season?
Breast Cancer and the Flu Shot: Is It Safe?

Word of the Week: Multivalent 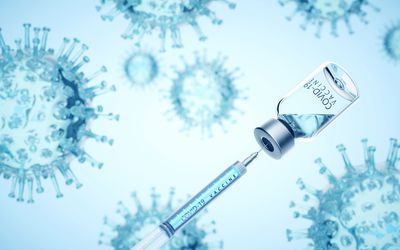