Both medications are effective, but their length of effectiveness varies

When pain hits, whether from arthritis, menstrual cramps or muscle strains, you want fast and effective pain relief. Nonsteroidal anti-inflammatory drugs, or NSAIDs, are the most common tools for over-the-counter pain relief. Naproxen (Aleve) and Ibuprofen (Advil or Motrin) are two common NSAIDs that are both effective for relieving pain. Naproxen is longer lasting, while ibuprofen often provides faster pain relief.

This article will detail the differences and similarities between naproxen and ibuprofen.

Choosing between Aleve and Advil can be confusing. That’s because these medicines are very similar; they are both NSAIDs, and they are both effective at relieving pain. However, there are small differences that might affect how they would work for you. Consider these key differences.

Ibuprofen (sold under the common brand names Advil and Motrin) works faster. Once you take a dose of ibuprofen, you’ll experience pain relief in 20–30 minutes. That’s for acute pain like a headache or broken bone. For chronic pain, you may need to take ibuprofen regularly for weeks before you experience pain relief, but you should talk to your healthcare provider before doing so.

Naproxen takes up to an hour to begin working. If you have ongoing pain, like a broken bone, recent surgery or arthritis, you may need to take naproxen regularly for three days to experience the most pain relief. Always talk to your healthcare provider about taking these medications regularly.

Ibuprofen and naproxen provide similar pain relief. Once they’ve started working, they are equally effective at blocking pain. However, you may respond differently to them. If you don’t experience relief with one, consult with your healthcare provider about trying the other. The Food and Drug Administration (FDA) has approved both medications to relieve mild to moderate pain.

The typical adult dose of ibuprofen is 200 milligrams (mg) every four to six hours. You should never take more than 1,200 mg in 24 hours.

The typical adult dose of naproxen is 220 mg.  For your first dose, you can take two pills, or 440 mg. You should never take more than three tablets in 24 hours.

Ibuprofen is taken every four to six hours. Naproxen, on the other hand, is taken every eight to 12 hours. Extended-release naproxen tablets are taken once a day and are usually used for chronic conditions like arthritis.

When you’re comparing the differences between over-the-counter pain relievers, there’s another common option: Tylenol (acetaminophen). Tylenol is not an NSAID. It provides pain relief but doesn’t reduce inflammation as effectively as NSAIDs like ibuprofen and naproxen.

However, since Tylenol works differently, it can be combined with NSAIDs for more power in relieving pain or reducing fever. Talk with your healthcare provider about how to alternate doses of Tylenol with ibuprofen like Motrin or Advil.

Since ibuprofen and naproxen are both NSAIDs, they have similar side effects. That’s one reason they shouldn’t be used simultaneously; the risk of side effects increases if combined.

The most common side effect of NSAIDs is an upset stomach. This can lead to ulcers and other serious problems. Other side effects of NSAIDs include:

Call your healthcare provider immediately if you have serious side effects including changes to your vision, breathing changes, hives, or other concerning symptoms.

Reasons to Be Cautious With NSAIDs

NSAIDs are safe and effective medications for many people. But they also come with a risk of serious side effects. NSAIDs can increase your risk of heart attack or other cardiovascular disease, especially if you’ve had a heart attack in the past. They’re also associated with other serious conditions, including gastrointestinal bleeding and kidney disease.

Talk with your healthcare provider about these risks, especially if taking NSAIDs long term or using a high dose. You shouldn't take NSAIDs such as ibuprofen or naproxen with any of the following conditions:

Ibuprofen (Advil) and naproxen (Aleve) are both NSAID pain relievers that are fast and effective at providing pain relief, reducing inflammation, and fighting a fever. Ibuprofen works in as little as 20 minutes, whereas naproxen needs about an hour to take effect. 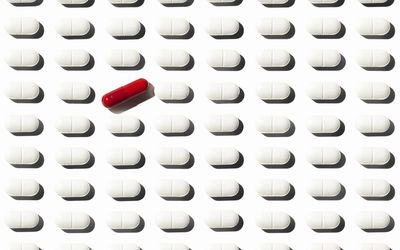