Naproxen and ibuprofen belong to a class of drugs called nonsteroidal anti-inflammatory drugs (NSAIDs). They are better known by their brand names Aleve (naproxen) and Advil or Motrin (ibuprofen). Both work to inhibit chemicals that cause inflammation in the body due to arthritis.

These two NSAIDs also have differences. For example, naproxen offers long-lasting relief and is taken twice daily. On the other hand, ibuprofen is a shorter-acting anti-inflammatory that is taken every four to six hours.

They are both available as pills and liquid capsules, but ibuprofen is also available in liquid form. Naproxen is safe for anyone age 12 and over, whereas small doses of ibuprofen can be given to children under age 12, including infants.

The article will cover the similarities and differences between naproxen and ibuprofen, their effectiveness, safety, and side effects for people with arthritis.

Naproxen vs. Ibuprofen: Which Is More Effective for Arthritis?

Naproxen and ibuprofen are classified as nonselective NSAIDs because they block both cyclooxygenase 2 (COX-2) and cyclooxygenase 1 (COX-1) enzymes. Blocking these enzymes can effectively relieve pain and bring down inflammation.

COX-2 enzymes are involved in pain signaling and inflammation, primarily at the site of inflammation. In addition to those functions, COX-1 enzymes work to protect the stomach lining from digestive juices, and so blocking COX-1 can produce undesirable side effects.

Naproxen will stay active in the body for longer than ibuprofen. Its effects can last up to 12 hours, so you only need two doses to get 24-hour coverage. Naproxen is also available as a prescription-strength extended-relief tablet.

Ibuprofen is short-acting, so it needs to be taken every four to six hours. The dosing difference between naproxen and ibuprofen makes naproxen a more convenient option for arthritis pain relief.

Naproxen vs. Ibuprofen: Which Is Safer?

Studies have questioned the safety of NSAIDs like naproxen and ibuprofen due to their effects on cardiovascular health.

Such findings have led the Food and Drug Administration (FDA) to require strong warnings on the drug labels of all NSAID pain relievers related to their risk for heart attack and stroke if taken in high doses for long periods. The risk for heart attack or stroke from NSAID use is higher for people with preexisting heart disease.

What Is Heart Disease?

Naproxen might have a lower risk for heart problems than other NSAIDs. According to a 2017 American Journal of Cardiovascular Drugs report, over-the-counter (OTC) naproxen is believed to pose minimal cardiovascular risk.

The report's authors suggest healthcare providers assess benefits, risks, and appropriate use for each person being treated to address any underlying conditions that might lead to a cardiovascular event.

Taken occasionally and as directed, NSAIDs are generally safe. But long-term use of NSAIDs can lead to kidney problems and gastrointestinal (GI) troubles.

Overuse of NSAIDs might lead to acute kidney injury. The risk for kidney damage is the same for all NSAIDs. That risk might be higher for some people, including:

All medications have side effects. Most of them resolve once the body gets used to the drug. Because naproxen and ibuprofen are both NSAIDs, they cause some of the same side effects.

The most common side effects of naproxen are:

More severe side effects of naproxen include:

The same side effects caused by naproxen can also occur with ibuprofen use. However, the risk for high blood pressure and cardiovascular events is much higher with ibuprofen.

Do not take more than the recommended dosage for naproxen and ibuprofen to lessen the potential for side effects. Do not take either OTC NSAID for more than 10 days at a time without talking to a healthcare provider first. Smoking cigarettes or drinking alcohol while on NSAIDs can increase your risk for side effects.

Is It Safe to Mix Painkillers and Alcohol?

If you experience severe side effects while taking naproxen or ibuprofen, reach out to a healthcare provider. You should also reach out if you believe you may have taken too much of either drug.

There is no right or wrong answer for managing your arthritis pain. You must figure out what works best for you and your overall health.

Determining the best medication for you depends on a few different factors, such as:

What works well for someone else to manage arthritis pain might not work for you. Therefore, you will need to try different pain relievers to see what helps.

Healthcare providers are a good resource for helping you manage your arthritis pain. They can assess your pain and determine whether an OTC NSAID is best or if you might need a more potent pain reliever.

Ibuprofen comes in oral tablets, liquid gel capsules, chewable tablets, liquid drops, and a liquid suspension. It can be taken every four to six hours as needed. The recommended OTC dosages for managing arthritis pain in people ages 12 and up are 200–400 milligrams every four to six hours as needed at no more than 1,200 milligrams daily. The dosing for children 12 and under varies based on the child's weight.

Both naproxen and ibuprofen are part of a class of drugs called NSAIDs. They are effective pain relievers for arthritis pain. They are fast-acting and work similarly to reduce pain and bring down inflammation.

Because they are both NSAIDs, they cause many of the same side effects. However, the risk for heart disease may be higher with ibuprofen. A healthcare provider can help you decide which NSAID is safest and more effective for managing your arthritis pain.

NSAID pain relievers are not your only option for managing arthritis pain. Many arthritis conditions can cause significant pain, and pain management can be vital to improving your prognosis and outlook.

While there is no cure for arthritis, treatment can slow down its effects, reduce pain, make other symptoms manageable, and prevent or slow joint damage and disability. Work with a healthcare provider to find the best treatment plan for your unique health situation. 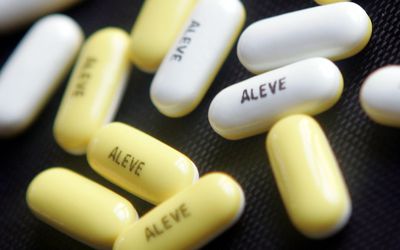