The most common cause of a peptic ulcer is a type of bacteria called Helicobacter pylori (H. pylori). A second, less common cause of peptic ulcers that's steadily increasing in importance is the use of non-steroidal anti-inflammatory medications (NSAIDs) such as aspirin, ibuprofen, and naproxen.

Using over-the-counter NSAIDs for the occasional headache or achy back won’t typically cause a peptic ulcer. Rather, peptic ulcer disease is something that can occur with longer-term use of NSAIDs, especially at high doses, such as for chronic pain associated with arthritis or other inflammatory conditions.

People who have any concerns about the use of NSAIDs and how the digestive system will be affected should speak to a healthcare provider.

Why NSAIDs Can Cause Ulcers

NSAIDs can cause ulcers by interfering with the stomach's ability to protect itself from gastric acids. While these acids are vital to the digestive process, they can cause damage if the protective barriers of the stomach are compromised.

Normally, the stomach has three protections against gastric acid:

NSAIDs slow the production of protective mucus in the stomach and change its structure.

A class of lipids made by the body called prostaglandins have an effect on pain receptors. NSAIDs work to reduce pain by blocking the enzymes that are involved in the production of certain prostaglandins. Prostaglandins are also protective in the mucosal layer of the stomach, and when they are depleted, there can be a break in that layer.

The suppression of the body's natural defenses against gastric acids can lead to inflammation in the stomach lining. Over time, this can cause the rupture of a capillary blood vessel, causing bleeding and the development of an open, ulcerative sore in the mucosal lining.

A peptic ulcer may cause symptoms in the digestive tract, but some people have no symptoms at all.

The most common symptom is upper abdominal pain (where the stomach is located) that can feel dull or burning. The pain can range in severity, with some experiencing mild discomfort and others having severe pain. Most of the time the pain will occur after a meal but for some people, it might also occur at night. It could go on for anywhere from a few minutes to a few hours.

Other symptoms are less common but can include bloating, burping, gas, nausea, vomiting, loss of appetite, weight loss, feeling sick to your stomach, and feeling full after even a small meal.

In rare cases, people with peptic ulcers may see blood in their stool or have stools that are black because they contain blood. Blood coming from one or more peptic ulcers could also be visible in vomit.

Call your healthcare provider right away if you notice blood in your stool or vomit. This can be a sign of excessive bleeding or other serious problems.

When the symptoms of a peptic ulcer are present, a healthcare provider may order several tests to determine the cause and confirm the diagnosis.

In people who are receiving NSAIDs for chronic pain, a healthcare provider may already have a high suspicion that the medication is the cause of, or is contributing to, peptic ulcer disease. Because it is the most common cause of peptic ulcers, infection with H. pylori is normally ruled out through the use of a breath test, blood test, or stool test.

Tests may be done to look for ulcers in the inside of the upper digestive tract. These include:

All NSAIDs have the potential to cause indigestion, gastric bleeding, and ulcers. However, some people are more susceptible to developing peptic ulcer disease than others.

Peptic ulcers caused by NSAIDs are more likely to occur in people who:

While studies suggest that as much as 25% of people who use NSAIDs long-term will develop an ulcer, only a small percentage of those will go on to develop serious complications.

NSAID-induced ulcers usually heal once the NSAID is stopped. Treatment may be recommended to speed up the healing process. In other cases, surgery may be needed.

A healthcare provider may recommend taking one or more medications.

The larger problem for people experiencing peptic ulcer disease as a result of therapy with NSAIDs is how to manage pain when those medications are discontinued. In the case of chronic pain, this may require the help of a team of specialists, including a pain management healthcare provider.

A class of medications called COX-inhibitors might be used to control pain for some people. COX-inhibitors have been shown to work for pain relief and are associated with fewer digestive side effects than other types of NSAIDs. These drugs have also been shown to have cardiovascular side effects, however, so it’s usually recommended that they be used at the lowest effective dose.

Some lifestyle changes that may be recommended in order to help heal peptic ulcers include:

In some cases, surgery for a peptic ulcer may be needed. This is more often the case when there are complications as a result of the ulcer, such as:

Obviously, avoiding long-term/high-dose use of NSAIDs, or not using these medications altogether, can help protect you from peptic ulcers.

If you have to take an NSAID due to a condition you are trying to manage, your healthcare provider may prescribe you one of the medications used to treat peptic ulcers in order to prevent one from occurring in the first place.

Some think that spicy food and everyday stress cause ulcers, but that has been disproven. The above lifestyle changes can, however, help reduce your risk.

Most people who take NSAIDs will not experience peptic ulcer disease. However, people who have chronic pain and who are receiving high doses of these medications should be aware of the possibility.

In some cases, it might be appropriate to ask a healthcare provider if there are ways to prevent ulcers and if those measures should be put into place while receiving high doses of NSAIDs. Because untreated ulcers can lead to complications, it’s important to get a diagnosis and receive treatment right away if an ulcer is suspected. 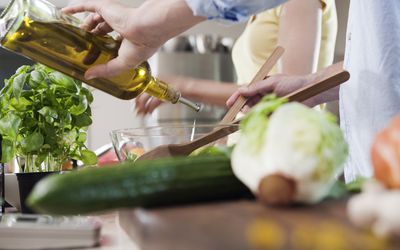