How to Diagnose and Treat Oral Gonorrhea

Gonorrhea is a common sexually transmitted infection (STI) that can cause infections in the genital area, rectum, and throat.

When gonorrhea affects the throat, it is also called pharyngeal gonorrhea.

Learn more about the symptoms of oral gonorrhea, risk factors, treatment options, side effects, and prevention strategies in this article.

Not everyone who contracts gonorrhea will experience symptoms.

Typically, gonorrhea in the throat doesn't cause any symptoms.

In some cases, gonorrhea in the mouth may cause symptoms like:

If gonorrhea is also present in other areas of the body—like the genitals or rectum—symptoms for women may include:

Symptoms in men may include:

Any sexually active person who has unprotected sex (also referred to as condomless sex) is at risk of contracting gonorrhea.

The Centers for Disease Control and Prevention (CDC) advises sexually active men who are gay or bisexual should get tested for gonorrhea at least once per year.

Sexually active women should get tested every year if they are:

Oral gonorrhea can be spread through oral sex.

The risk of contracting gonorrhea in the throat from oral sex can occur in a variety of scenarios. These may include:

Symptoms of gonorrhea may be mistaken for a bladder infection or infection in the vagina.

If testing for gonorrhea of the mouth specifically, a culture test is used.

Urine tests may also be offered.

In some cases, a healthcare provider may also order tests for other STIs like chlamydia or syphilis.

Treating gonorrhea is becoming more difficult due to the rising number of strains of gonorrhea that are resistant to antibiotics.

Treatment usually involves antibiotics. This is typically given as a single injection in the thigh or buttocks.

Symptoms will often improve within a few days of treatment, however, pain in the pelvis or testicles may take two weeks to resolve.

For women who experience bleeding between periods or heavier periods as a result of gonorrhea, this should resolve with treatment by the time of the next period.

Side Effects If Left Untreated

If left untreated, gonorrhea in the throat can lead to other issues. This includes:

A person without gonorrhea can contract the infection by receiving oral sex from someone living with this STI.

This may occur in a number of scenarios:

Telling a Sexual Partner About a Gonorrhea Diagnosis

This program works with local and state health departments and helps find and notify partners to anonymously advise them of their exposure to STIs. They then help provide testing and referrals to other services.

You can learn more about the program, including how to contact your local health department, here.

If sexually active, ways to lower the risk of contracting gonorrhea include:

Gonorrhea is a common sexually transmitted infection. It can be transmitted through sexual activity. Gonorrhea of the throat is also called pharyngeal gonorrhea. This is acquired through condomless oral sex with someone with this STI. Oral gonorrhea often doesn't cause symptoms, but some people may experience symptoms like a sore throat.

Treatment for gonorrhea involves an antibiotic injection. The best way to prevent oral gonorrhea is to refrain from having oral sex. Otherwise, using condoms or being in a monogamous, long-term relationship with someone who has not acquired gonorrhea can also prevent infection.

Talking about sexually transmitted infections can be uncomfortable, but it is important to remember gonorrhea is common and not something to be embarrassed about. If you think you may have gonorrhea, it is important to reach out to a healthcare provider for help and support. They will be able to tell you what to do next. 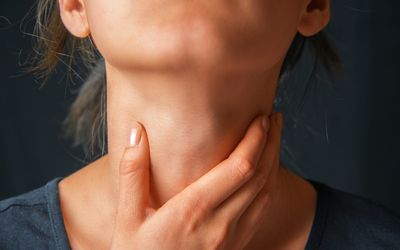 Gonorrhea of the Throat: Everything You Need to Know