Tom Iarocci, MD
Tom Iarocci, MD, is a medical writer with clinical and research experience in hematology and oncology.
Learn about our editorial process
Medically reviewed
Verywell Health articles are reviewed by board-certified physicians and healthcare professionals. These medical reviewers confirm the content is thorough and accurate, reflecting the latest evidence-based research. Content is reviewed before publication and upon substantial updates. Learn more.
by
Chris Vincent, MD

If you've experienced pain with drinking alcohol, what could it mean? Pain after drinking alcohol has been associated with Hodgkin lymphoma. In general, though, there are usually other reasons for the pain.

Drinking too much can cause the familiar hangover and the general feeling of being unwell. It also may cause irritation or pain in the area over the stomach, esophagus, pancreas, gallbladder, and liver. There is a long list of disorders and diseases linked to excessive alcohol use.

This article discusses these conditions, some of which may be quite serious. It will help you to be familiar with symptoms of these illnesses and the causes of pain linked to drinking alcohol.

When someone has unusual pain in response to alcohol, there are several possible causes. The list of conditions includes Hodgkin lymphoma, but also something called carcinoid syndrome. Plain old genetics may be at work too.

Alcohol intolerance and allergy account for most of the unusual responses that happen after drinking alcoholic beverages.

True alcohol allergy is believed to be rare. It usually runs in families. Like other food allergies, it may carry the risk of a severe allergic reaction called anaphylaxis. Sometimes the allergy is really because of an ingredient in the beverage, such as grains or preservatives, and not the alcohol itself.

Alcohol intolerance can cause people to feel unpleasant symptoms after drinking alcohol, including skin flushing, nausea and vomiting, headache, and a rapid heartbeat. It's caused by the lack of an enzyme that breaks down alcohol in the body, called alcohol dehydrogenase. It's more common in Asian populations.

Other causes of allergies and intolerances to alcohol may include:

Carcinoid syndrome also is quite rare. It involves a type of slow-growing tumor called a carcinoid tumor, which releases serotonin. This is a chemical messenger that can, in turn, produce the symptoms of this syndrome. They include:

These symptoms may be triggered by alcohol in some cases.

Some alcohol intolerance cases are linked to the use of certain medications. They include Antabuse (disulfiram) and Flagyl (metronidazole).

About half of people with lymphoma will have enlarged lymph nodes. These nodes are not usually painful to the touch, although they can ache.

In some people, the affected lymph nodes can become painful after drinking alcohol. This seems to happen more often in people with Hodgkin lymphoma.

It is not one of the key symptoms in the diagnosis of lymphoma. In fact, it is quite rare.

There is a long history of this association between alcohol and pain in Hodgkin's disease. A 1966 review described 747 patients with alcohol-induced pain linked to cancer-related illness. Hodgkin lymphoma accounted for 40% of cases. Two other reviews in 1994 and 2013 discuss the association but there are few other studies on the books.

Scientists don't know the reason for alcohol-related pain in Hodgkin's disease, but there are several theories. Some believe that pain is related to expansion of the blood vessels within the lymph node triggered by exposure to alcohol in the bloodstream.

In one case report, this type of pain was relieved with Advil (ibuprofen). Advil acts on a chemical messenger called prostaglandin. The authors' theory, then, was that a process involving prostaglandin might have been involved.

It is not known whether this reaction to alcohol reveals or predicts anything about the severity or outcome of the Hodgkin's disease.

Some people who use alcohol experience pain with drinking. Most of the time this pain is due to alcohol intolerance or allergies to alcohol or other beverage ingredients. Other health issues also may be at work, and some of these conditions may be more serious. They include Hodgkin's disease and carcinoid syndrome.

In 2013, Dr. Andrew Bryant and Dr. John Newman of Vanderbilt University Medical Center reported the case of a 31-year-old man who came to their clinic. The man had severe chest pain that began minutes after taking two to three sips of alcohol. This reaction had been repeating for about three months.

The patient felt no pain when swallowing other liquids or solids, and his pain was relieved with low doses of ibuprofen. In this patient’s case, the lymph nodes near the right lung, heart, and diaphragm (mediastinal lymph nodes) were affected by Hodgkin's disease.

There were other symptoms besides the chest pain. He had periodic fevers, night sweats, and general malaise. Malaise is a term which means simply not feeling well. Imaging and biopsy of one of the abnormal lymph nodes led to the diagnosis of Hodgkin's lymphoma.

People with Hodgkin lymphoma may develop a variety of symptoms. The most common scenario at diagnosis is enlarged lymph node(s) and nothing else.

Lymph nodes may be enlarged in the neck, armpits, or groin, causing a painless lump. They also may be in the chest and found on imaging studies.

Other Hodgkin lymphoma symptoms occur less often and are called B symptoms of lymphoma. They may include:

Some people experience pain after drinking alcoholic beverages. It is rare for this to happen. When it does, the pain may be a sign of an ongoing health condition.

Some cases of Hodgkin lymphoma have been linked to pain with drinking alcohol. The symptoms also may be related to carcinoid syndrome, or to a genetic mutation more often found in people of Asian ethnicity.

If you experience pain or have unusual symptoms after drinking alcohol, make an appointment to talk to your healthcare provider.

As with conditions such as gluten sensitivity, it may take some time to get to the bottom of your symptoms. You may want to begin a food journal while you are waiting for your appointment and tune into your body to note any other symptoms.

The Impact of Alcohol on Your Body
6 Sources
Verywell Health uses only high-quality sources, including peer-reviewed studies, to support the facts within our articles. Read our editorial process to learn more about how we fact-check and keep our content accurate, reliable, and trustworthy. 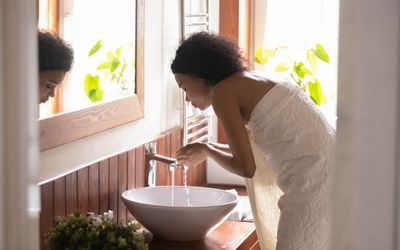 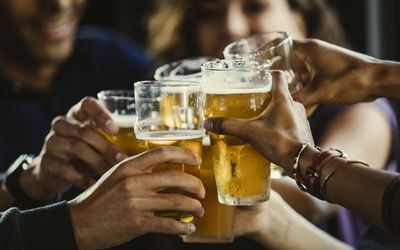 Everything You Need to Know About a Beer Allergy