Painful erections are never normal, and there are times when the pain may be a sign of a medical emergency. The pain may be severe and need immediate medical or occur sporadically but resolve once the penis is soft.

An erection ("hard on") occurs when two tube-shaped structures within the penis become engorged with blood due to sexual arousal or stimulation. The pain may be the result of a recent or prior injury, a blood circulation problem, drug use, or a neurological (nerve-related) issue.

This article explores the symptoms and causes of painful erections and explains how the condition is diagnosed and treated. It also describes when a painful erection is a sign of a medical emergency in need of immediate care.

Pain is the central feature of a painful erection, but the characteristics of the pain can vary based on the underlying cause. For example:

These and other symptoms can point a healthcare provider toward the correct diagnosis and treatment.

Why Do I Have Pain With Sex?

There are common and uncommon causes of painful erections, some of which are more treatable than others. Each has tell-tale signs and risk factors that can help differentiate one from the other.

Peyronie's disease (PD) is a condition commonly affecting older people in which the penis suddenly develops an abnormal curve. It is thought to be caused by the buildup of scar tissue due to a history of mild sexual trauma or injury to the penis.

When this occurs, scar tissue can develop on the thick membrane surrounding the sponge-like columns of tissues within the penis (called the corpora cavernosa). This can cause the membranes to suddenly contract at the site of the scar tissue, leading to an abnormal curve.

PD can cause pain during erections due to stretching of the shortened membranes. Depending on the severity of PD, the pain may be felt when getting an erection or only during sexual intercourse. Some people with PD may also feel pain when the penis is flaccid (soft).

Risk factors for PD include:

A 2021 study published in Sexual Medicine concluded that 65.2% of people with Peyronie's disease—or roughly 3 of every 5 individuals—experience painful erections.

Priapism is an erection that persists for hours without sexual stimulation. There are three types of priapism a person can experience:

A penile fracture is considered a medical emergency and can lead to a change in penis shape, loss of the ability to maintain an erection (erectile dysfunction), and difficulties urinating.

While pain is usually felt at the time of the fracture, on rare occasions, a person may only experience pain later when they have an erection or sex.

Certain sexual positions can cause a penile fracture by colliding the erect penis against the bony structures of the pelvis. Some injectable drugs used to treat Peyronie's can increase the risk of penile fracture by dissolving scar tissues and weakening the tunica albuginea.

The cause of SRPE is unclear, but most studies suggest that obstructive sleep apnea (OSA) plays a central role. It is thought gaps in breathing spurred by OSA may increase blood flow to the penis and stimulate the production of chemicals called neurotransmitters that may amplify a person's sensitivity to pain.

SRPE may also result from intermittent ("stuttering") priapism which tends to occur more at night than during the day.

Can Sleep Apnea Cause Erectile Dysfunction?

Painful erections are sometimes caused by forming a benign (non-cancerous) tumor on a blood vessel or nerve of the penis.

One such example is a rare tumor called an epithelioid hemangioma which typically causes a painless tumor around the head or neck. Cases have been known to occur within the blood vessels of the penis. During an erection, the tumor can suddenly press on a nearby nerve and trigger acute pain or discomfort.

Another example is a rare, painless tumor called a schwannoma that usually develops on nerves in the head, neck, or limbs. When a schwannoma occurs in the penis, it can cause painful erections during the day but more often during the night. Pain with ejaculation and erectile dysfunction are also common.

Penile lichen sclerosus is a rare condition most commonly seen in people with an uncircumcised penis that causes the progressive hardening of the tissues of the foreskin and glans. If left untreated, it can cause scarring that affects not only sexual function but urinary function as well.

The cause of penile lichen sclerosus is unknown but is thought by some to be a form of autoimmunity (in which the immune system attacks the body's tissues). The persistent dribbling of urine under the foreskin may also contribute by causing long-term tissue injury.

What Causes Penis Pain During Sex?

How to Treat Painful Erection

The treatment of a painful erection varies by the underlying cause as well as the severity of pain.

The first, best step is to allow the penis to return to its normal flaccid state. This may not be easy if an injectable erectile dysfunction drug like Caverject (alprostadil) has been used or even possible without medical assistance if priapism is involved.

In non-emergency situations, placing a cold compress on the penis or perineum for 10 to 20 minutes may help reduce the erection while alleviating pain. (But, avoid over-icing the skin as this can cause frostbite and tissue or nerve damage.)

If there is lingering pain, an over-the-counter pain reliever like Tylenol (acetaminophen) or Advil (ibuprofen) can help.

But, treating acute pain is only part of the solution. A healthcare provider will also want to treat the underlying cause to avoid complications and recurrence.

Are There Tests to Diagnose Painful Erection?

The diagnosis of a painful erection involves a physical examination of your penis and a review of your medical history (including any medical conditions you have or any medications you may be taking). You may be referred to a specialist known as a urologist who is trained in diseases of the urinary system and male reproductive tract.

The most common tool used for the diagnosis of penis abnormalities is an ultrasound. This is a non-invasive device that uses sound waves to create detailed images of soft tissues. It can check if your penis has any scar tissues, tumors, nodules, bleeding, tears, or circulation problems.

If the cause remains unclear, magnetic resonance imaging (MRI) may be ordered. This technology uses powerful magnetic and radio waves to create highly detailed images of soft tissues. An MRI can sometimes detect what a penile ultrasound may miss.

Other blood tests may be ordered to check for blood diseases associated with priapism, such as sickle cell disease or certain cancers.

If a tumor is found or lichen sclerosis is suspected, a biopsy may be performed to obtain a tissue sample to examine in the lab. This can ensure that the condition is benign and not malignant (cancerous).

Ischemic priapism is a medical emergency. If left untreated, the blockage of blood circulation can deprive tissues of oxygen needed to survive. The resulting damage to tissues, nerves, and blood vessels can lead to scarring, changes in penile appearance, and erectile dysfunction.

On rare occasions, priapism can lead to a potentially life-threatening condition called gangrene, in which the rapid progression of tissue death may require the amputation of the penis.

It has been estimated that priapism lasting 24 hours is associated with a 50% chance of permanent erectile dysfunction.

Call 911 or go to your nearest emergency room if you have an erection lasting more than four hours without sexual stimulation or interest.

A painful erection can be caused by many things, some of which are severe. Possible causes include Peyronie's disease, a penile fracture, penile tumors, penile lichen sclerosus, and a rare disorder called sleep-related painful erection (SRPE).

A painful erection may require diagnosis and treatment by a specialist known as a urologist. The diagnosis may involve a physical exam, blood tests, a biopsy, and imaging tests such as a penile ultrasound or magnetic resonance imaging (MRI).

Priapism is a medical emergency in which an erection lasts for four hours or more, typically with increasing pain. Priapism can lead to permanent damage and irreversible erectile dysfunction if left untreated.

As embarrassing as it may be to discuss an erection problem with a healthcare provider, don't let discomfort stand in your way of getting diagnosed and treated.

Delaying treatment for conditions like Peyronie's disease can make the symptoms far more difficult to treat and increase the risk of complications, such as erectile dysfunction. Moreover, there may be an underlying condition that requires immediate medical care.

Even if the pain is relatively mild, it can still affect your sex life, making it harder to sustain an erection or achieve an orgasm. If you feel awkward discussing erection problems with your primary care provider, ask for a referral to a urologist or speak with a urologist via telehealth services.

What to Know About Telehealth With a Urologist 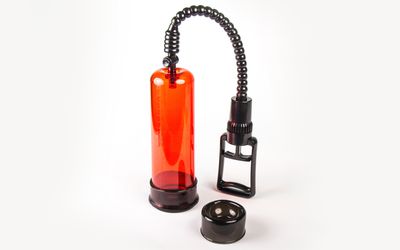