A Plant-Based COVID-19 Vaccine Could Soon Hit the Market

On February 24, Canadian regulators approved Medicago's plant-based COVID-19 vaccine, called Covifenz. The vaccine is approved for use in adults aged 18 through 64. In clinical trials, the two-dose vaccine demonstrated a 71% efficacy rate.

The first mRNA vaccine approved for human use was developed during the pandemic, and now researchers are working on another first: a plant-based COVID-19 vaccine.

Researchers at Quebec-based biotechnology company Medicago and drugmaker GlaxoSmithKline have developed a plant-based vaccine for SARS-COV-2, the virus that causes COVID-19. And their recently reported interim findings from phase 2 clinical trials look promising. The vaccine uses a plant called Nicotiana benthamiana, which is a relative of the tobacco plant.

Like other COVID-19 vaccines, the plant-based option is a two-dose shot given 21 days apart.

Results of Medicago’s trials so far showed subjects developed a strong antibody response after receiving the jab—“about 10 times higher than those seen in people recovering from natural disease,” Brian Ward, MD, Medicago’s chief medical officer, tells Verywell. “And those antibody [measurements] are higher than almost all of the other vaccines that have been reported to date.”

The phase 3 trial of the plant-based vaccine candidate launched in March, and Medicago is recruiting subjects across the world including in the United States, Canada and the United Kingdom.

The U.S. Food and Drug Administration (FDA) has granted Fast Track designation for the vaccine, the company says, and Canada’s health agency has started a review process.

“The whole company has been working flat-out since February last year and we're within a couple of months of knowing how well this vaccine will work,” Ward says. “It works in monkeys, it makes a great immune response, and it seems to be very safe to give to people.”

A greenhouse may be an unlikely place for COVID-19 vaccine development, but it’s where the scientific process starts. For all vaccines, scientists must find a way to produce an antigen—the molecule that stimulates an immune response. With Medicago’s vaccine, plants produce the antigen.

Robert Kozak, PhD, an assistant professor at the University of Toronto’s Department of Laboratory Medicine and Pathobiology, who is not involved in Medicago’s vaccine, tells Verywell that the plant used in the vaccine is very susceptible to different pathogens like bacteria and viruses.

Vaccines Are Slightly Less Effective Against B.1.617 Variants of COVID-19

This is a good thing. Ward explains that the plant produces what are called “virus-like particles” (VLPs), which are non-infectious. This process starts when a little bit of DNA is inserted into the plant cell to produce proteins.

“It's very similar to what AstraZeneca and the Johnson & Johnson vaccines do, except they do it in the human body,” Ward says. “They use adenovirus to deliver a little tiny piece of DNA into our muscle cells, and then our muscle cells produce the [SARS-COV-2] spike protein.”

With the plant-based vaccine, once the DNA is injected into the plant cell, the spike proteins move to the surface where they form VLPs. They don't contain any genetic information, so they can't replicate and they’re non-infectious, Ward says.

“We purify those little virus-like particles (VLPs), and we inject it into your muscle with…something that helps to stimulate the immune response,” Ward adds.

These VLPs are basically the “empty shell” of COVID-19, Kozak explains, which can present more antigens to your immune system. This differs from mRNA vaccines, for example, which only show your immune system the spike protein of the coronavirus.

“But with this, you've got the spike protein, the envelope protein, and then something called the M protein—all the things that make up the shell,” Kozak says. “That's actually kind of helpful because it’s probably more likely to build a more robust immune response.”

Benefits and Challenges of a Plant-Based Vaccine

Ward says plant-based vaccines are also faster to produce than other traditional vaccines. Medicago has also developed a plant-based flu vaccine that is under review with Health Canada. The company says it takes five to six weeks to produce it compared to the five to six months it takes using egg-based production means—a process commonly used in vaccines.

How to Ask Someone If They’re Vaccinated Against COVID-19

Once we understand how effective the plant-based COVID-19 vaccine is in real-world settings, they might be an option for people who need to mix-and-match vaccines, Kozak says.

But Ward says being the first to make a plant-based COVID-19 vaccine has been challenging, too. The team has learned a lot—including how to figure out how to "lift up and invert hundreds of these little plants" so they can transfer the DNA into their roots. "Nobody's ever done that before at scale," he says.

Plants also require certain environmental conditions to grow, including plenty of sunlight. This means not every country may be positioned or have the infrastructure to develop plant-based vaccines at scale.

The Future of Plant-Based Vaccines

Ward and his colleagues are currently recruiting people in countries across the world for human trials. They are hopeful that their COVID-19 vaccine will also help protect against variants of the virus.

The vaccine has been tested in the lab setting against different variants including the variants that originated in the U.K., South Africa, and Brazil. So far, the results look promising.

“We don't know how well that will translate into efficacy in the field, but many other companies…have shown that there is a pretty good relationship between the amount of antibody your vaccine produces and how well it protects against the variants,” Ward says.

Even if new variants emerge as the pandemic continues, Ward says it will be relatively easy to adapt the vaccine. All researchers need is the virus’ sequence information, “and we can have a candidate vaccine at small scale, obviously, in a matter of just a couple of weeks,” he says.

Both Ward and Kozak think plants are very promising in the world of vaccines and medicine, and are hopeful that we will soon see more “green” options.

“We are pretty confident that over the next five to 10 years, others will follow in our footsteps,” Ward says. 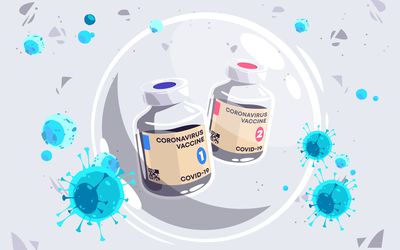 Researchers Are Developing a New COVID Vaccine for Cancer Patients