Why Psoriasis Is an Autoimmune Condition

Psoriasis causes a variety of symptoms that range from merely irritating to actually debilitating. The symptoms can include thick, red patches on the skin; pitted, ridged fingernails; scaly, itchy scalp and hair loss; and stiff, painful joints.

Why do some people, but not others, get this frustrating condition in the first place? Arriving at an answer to this question relies partly on knowing that psoriasis is an autoimmune disorder – "auto" meaning self and "immune" referring to the body's complex immune system.

What Is an Autoimmune Disorder?

Your body's immune system is responsible for fighting foreign invaders threatening your health: bacteria, viruses, and fungi are just a few examples. Your good health depends partly on two important features of the immune system:

Unfortunately, when you have an autoimmune disease, your body's immune system mistakenly confuses what is "self" with what is "other." Instead of protecting your body, the immune system produces cells and chemicals that attack your own body, causing damage and disease.

There are many different autoimmune diseases, including psoriasis, rheumatoid arthritis, some types of thyroid diseases, some forms of anemia, lupus, celiac disease, and type 1 diabetes.

Why Is Psoriasis an Autoimmune Disorder?

However, when you have psoriasis, your T-cells mistakenly identify your skin cells as invaders and attack them. This attack injures the skin cells, setting off a cascade of responses in your immune system and in your skin, resulting in the skin damage seen in psoriasis – swelling, reddening, and scaling.

In an effort to heal, your skin cells begin reproducing much more rapidly than normal, and large numbers of new skin cells push their way to the surface of your skin. This occurs so quickly that older skin cells and white blood cells aren't shed quickly enough. These discarded cells pile up on the surface of the skin, creating thick, red plaques with silvery scales on their surface: the hallmark of the classic form of plaque psoriasis.

Why Do People Get Psoriasis?

Encountering certain environmental triggers seems to jump-start the machinery of the body's immune system in vulnerable individuals. Some of the environmental factors that seem to be able to trigger psoriasis or to cause a flare-up of the condition in someone who already has the disorder include:

How Autoimmune Disorders Are Treated

A number of medications can be used to try to quiet down the immune system. Two common examples are Trexall (methotrexate) and Sandimmune (cyclosporine). Other possible treatments belong to the pharmaceutical class known as "biologic drugs," which are made from human or animal protein, including Enbrel (etanercept), Remicade (infliximab) and Humira (adalimumab). 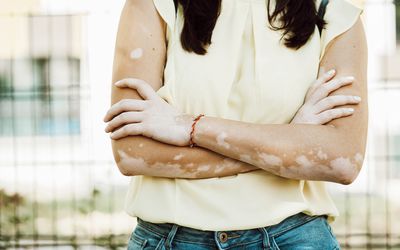 Vitiligo and Psoriasis: Is There a Connection?