Psoriasis affects people of all races and skin colors. However, it seems some people face unique challenges­­—both physically and psychologically—based on their skin color. By understanding how psoriasis affects skin tones differently, people with the condition can better manage their disease and communicate with their healthcare providers about the effect the disease has on them.

Here is what you need to know about differences in prevalence, presentation, severity, and treatment approaches in psoriasis based on skin tone.

Psoriasis affects more than 8 million people in the United States and 125 million around the world, according to the National Psoriasis Foundation. Additionally, the prevalence of psoriasis in white people is 2.5% and is 1.3% in African Americans. And about one-third of people who have psoriasis also have a relative who also has the condition. This means that genetics are a risk factor for the development of the condition.

Psoriasis is considered a systemic disease because it affects more than one part of the body or the entire body. It is also an autoimmune disease caused by an overactive immune system, where the immune system launches an inflammatory response against its own body. With psoriasis, inflammation targets the skin.

Psoriasis is characterized by patches of abnormal skin called plaques. These are dry, itchy or painful and red in color. However, they may appear purple in people with darker skin. The severity of these plaques varies from small, localized patches to complete body coverage. Psoriasis plaques can occur anywhere on the body, including inside the mouth, on the scalp, and on the genitals.

People with darker skin may come from African, Asian, Native American, Middle Eastern, or Hispanic backgrounds. Studies show the presentation of psoriasis differs by skin color. For example, people with darker skin may present with less noticeable skin reddening, which makes it harder for healthcare providers to appreciate areas that are actively inflamed. These areas could also appear as dark brown or grey, another barrier to recognizing inflammation.

Severe disease in psoriasis involves skin involvement in more than 10% of the body. The severity of the disease may be worse for people with darker skin. In fact, Asians and African Americans with psoriasis may have greater body surface involvement.

Psoriasis skin plaques in people with fair (light-colored) skin appear as pink or red in color and scales are a silvery-white color. Plaques on darker Hispanic skin may appear salmon-colored with silvery-white scales. In African Americans, plaques appear purple and the scales grey. It is also possible for psoriasis to appear brown in color, which makes it difficult to see on darker skin. African Americans also more often affected by scalp psoriasis than fair-skinned people. Additionally, when psoriasis plaques clear up on darker skin, the affected skin will appear darker or lighter than it was before. This appearance change can last for months or longer, often leading to distress for the affected person.

One 2014 review in the Journal of Drugs in Dermatology reported on a survey completed by 29 dermatologists considered opinion leaders in the care of psoriasis. About 66% reported on the clinical presentation of psoriasis in African Americans, which included more abnormality in skin color, thicker plaques, and less skin erythema (redness from inflammation).

Additionally, other skin conditions, such as eczema, may appear similar to psoriasis in people with darker skin and are more common in African Americans. In these instances, a biopsy can help with making an appropriate diagnosis.

Because psoriasis presents differently for different skin types, it may be harder to diagnose. In fact, it is often misdiagnosed in people who have darker skin. Disease presentation in people with darker skin often leads to delays in diagnosis and treatment. But getting an early diagnosis is still important because the sooner a person is given a diagnosis, the sooner they can start treating their disease effectively.

Quality of Life and Disease Severity

Studies suggest the quality of life effect on people with darker skin is far worse than it is for people with fair skin.﻿﻿ Potential reasons may include the long-lasting effect of psoriasis, especially in the development of pigment abnormalities. Cultural perceptions of the disease may also adversely affect the quality of life, as psoriasis tends to be a condition of stigma and misconception. This was confirmed by a study reported in 2011 by the Journal of Drugs in Dermatology noting that African Americans and Asians were more profoundly affected by psoriasis—both physically and emotionally—than people with fair skin.﻿﻿

Disease severity may also be a problem for people with darker skin. A study reported in 2017 in the Journal of the American Academy of Dermatology aimed to determine differences in severity based on ethnicity.﻿﻿ The study’s researchers examined a database of ethnically diverse psoriasis patients who were seen at the University of San Francisco’s Department of Dermatology. What they found was that African Americans, Hispanics, and Asians had more severe psoriasis than the white study subjects.

While severity and quality of life may result in worse outcomes and a negative outlook for people with darker skin, these may not be the only obstacles encountered. In fact, some researchers believe non-white racial minorities may not have access to skin specialists. For example, one 2019 report in the Journal of Investigative Dermatology reports that Black people are less likely to receive biologic therapies for psoriasis.﻿﻿ The researchers blame for lack of experience and poor understanding of these drugs. Other studies suggest racial and ethnic minorities are limited in access to dermatologists and other specialists, resulting in high numbers of undiagnosed and severe cases of psoriasis in African Americans.﻿﻿

Ask an Expert: How Can I Find a Dermatologist Who Specializes in Skin of Color?

While psoriasis can appear different on skin tones, skin color doesn’t often determine treatment options. You may still ask your healthcare provider to personalize your treatment for your skin type and color, especially because darker skin may be more harshly affected by some psoriasis treatments.

Treatments for psoriasis may include:

Topical creams/solutions: These are the first-line treatment for most people with psoriasis. Steroid creams are commonly used in treating psoriasis. Other topical treatments include anthralin, vitamin D-3, and vitamin A creams and ointments to manage skin flare-ups. Many of these products are available only with a prescription. Over-the-counter (OTC) creams include those containing aloe vera, capsaicin, salicylic acid, and coal tar. Products containing salicylic acid and coal tar may come in different forms for managing psoriasis-affected skin, including as lotions, foams, creams, tars, bath gels, and shampoos. Salicylic acid and coal tar have been approved by the U.S. Food and Drug Administration for treating psoriasis.

Systemic medicines: When topical treatment methods don’t help, your healthcare provider may prescribe systemic drugs, which are available in pill or liquid form, or as injections. Systemic drugs are prescription drugs that affect the entire body. They include traditional disease-modifying antirheumatic drugs (DMARDs), such as methotrexate, and biologic drugs, such as Humira, which are prescribed to people with moderate to severe psoriasis.

Phototherapy: Also called light therapy, phototherapy involves regular exposure to ultraviolet light under the supervision of a medical professional. Phototherapy has been proven to be a successful treatment for psoriasis and other inflammatory skin diseases. While a helpful therapy, light therapy can cause any dark spots on dark skin to become more noticeable, according to the American Academy of Dermatology. But before you consider dismissing phototherapy because of the potential for skin discoloration, talk to your healthcare provider about the types of phototherapy to find out which ones would have the least effect on your skin's pigment.

Frequent shampooing: Frequent shampooing helps to remove dry scales in the people whose psoriasis affects their scalp. African Americans with scalp psoriasis may be advised to use a medicated shampoo once or twice a week. This group may also need to apply topical medication to the scalp.

One of the biggest treatment challenges for people with darker skin is achieving clear skin. Psoriasis inflammation and plaques many leave behind dark patches and light spots which are more noticeable in darker skin. This presents like vitiligo, a condition where the skin loses its pigment (color) cells. You should discuss any concerns with your healthcare provider about the aftereffects of psoriasis treatments and ask for ideas on how you can deal with these challenges as they arise.

Regardless of skin tone, everyone with psoriasis should try to find ways to improve their quality of life. Psoriasis is a very visible condition, and no one is more aware of it than you. People may think it’s contagious, or they may stare at your skin, and this may make you feel embarrassed and want to self-isolate. When psoriasis affects your emotions, try to remember that you are not alone and that psoriasis affects millions of people worldwide. Psoriasis doesn’t discriminate; it doesn’t care about skin color or other human characteristics.

Reach out to others with the condition—through social media, or through online and in-person support groups—especially those who face similar skin color challenges. You may want to include family and friends in your support network. By opening up and telling loved ones about your experience with psoriasis, they are better able and, hopefully, more willing to support you.

Coping With Psoriasis
15 Sources
Verywell Health uses only high-quality sources, including peer-reviewed studies, to support the facts within our articles. Read our editorial process to learn more about how we fact-check and keep our content accurate, reliable, and trustworthy. 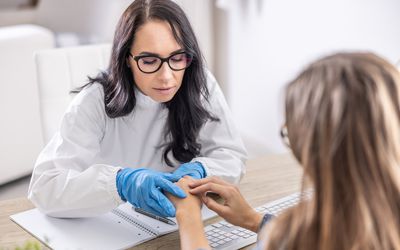 What is Lichen Nitidus? 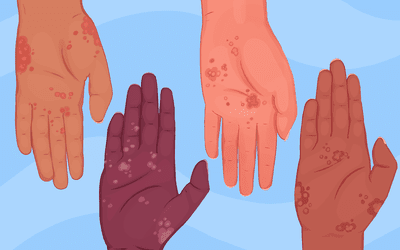 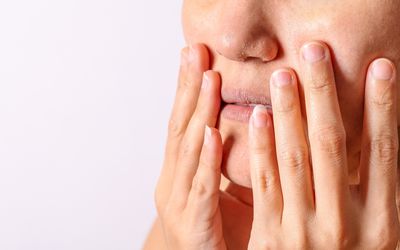