Psoriasis vs Ringworm: What Are the Differences?

The rashes look similar, but often occur in different places on the body.

At first glance, psoriasis and ringworm can appear similar. Both conditions cause red, scaly, and itchy plaques to form on the skin. While ringworm is a temporary rash caused by a fungus, psoriasis is an autoimmune condition that lasts for a lifetime, although the symptoms can be treated.

Determining which condition you have will help you get the treatment you need quickly. Here’s what you should know about the differences between psoriasis and ringworm, and the best ways to treat each.

One way to tell the difference between the conditions is where the rash occurs. Ringworm commonly happens on the feet, groin, or face. Psoriasis typically appears on the knees, elbows, scalp, and back.

The primary symptom of psoriasis are skin plaques. These are areas of thick, raised skin that often appear silvery and scaly. About 80% to 90% of people with psoriasis experience plaques. The area around the plaques is often red and raised. The plaques may sometimes itch or burn.

Other symptoms of psoriasis include dry, cracked skin, and thick, ridged nails on the hands and feet. Most often, people notice psoriasis on their elbows, knees, and scalp. The symptoms can come and go, with flare-ups followed by periods of remission.

Ringworm causes round plaques of dry red skin. The edge of the rash might be scaly and raised, but the inside is generally flat with smaller scales—this is one way to tell the symptoms of ringworm from those of psoriasis, which is raised throughout. The plaques are intensely itchy, especially as they spread to cover a larger area of the skin.

Ringworm can also cause:

Ringworm most often appears in moist areas of the skin, including the feet (athlete's foot), groin (jock itch), and around the beard area (barber’s itch).

Psoriasis is a lifelong condition that is caused by an autoimmune response. Ringworm, on the other hand, is a temporary infection caused by a fungus. Ringworm can be eliminated for good with treatment, but psoriasis will need to be managed throughout your lifetime.

Psoriasis is linked to an overactive immune system. This causes the skin to grow new cells every few days, rather than every few weeks. This rapid growth and buildup of cells are what cause the plaques that characterize psoriasis.

Unfortunately, doctors don’t yet know what triggers the immune system to become overactive, but there appears to be a genetic component since psoriasis often runs in families.

Other additional risk factors put you at increased risk for developing psoriasis, including:

Ringworm is caused by a fungus. Despite its icky-sounding name, there is no worm involved. The fungus that causes ringworm thrives in warm, moist environments, and passes through skin-to-skin contact. Because of this, the condition is especially common in athletes, including those who play contact sports, swim in indoor pools, and use locker rooms.

Other risk factors for ringworm include:

Most often, psoriasis and ringworm are diagnosed after a doctor examines your body. Most doctors can tell the difference between the two conditions and set you on the right path for treatment.

Occasionally, a doctor might take a small skin, hair, or nail sample (a biopsy) to diagnose ringworm. They’ll then examine this sample under a microscope. If they’re able to spot the fungus that causes ringworm, you’ll have a definitive diagnosis.

Ringworm can be treated and cured with a few weeks of antifungal treatment. Psoriasis, on the other hand, requires a lifetime of management.

There’s no cure for psoriasis, but psoriasis treatments can help keep symptoms at bay. One of the main ways to manage psoriasis is by establishing a daily bathing and moisturizing routine that works for you. Using special soaps, shampoos, and lotions to keep your skin well-hydrated will reduce the itching that you experience from psoriasis.

Your doctor might also recommend treating psoriasis outbreaks with:

If you have psoriasis, it’s critical that you learn your triggers, which might include certain foods, seasonal changes, or injuries. Once you know your triggers, do your best to avoid them to prevent flare-ups.

Continue to take your medication for as long as it's prescribed even if your symptoms disappear. Doing so ensures that the fungus that causes ringworm is completely out of your system.

Ringworm can be prevented by minimizing your risk of exposure, especially in sports settings. Prevention can include:

Having a skin rash can be uncomfortable and embarrassing. It’s important to remember that whether you have psoriasis or ringworm, the condition is not your fault and is not a reflection of your hygiene or cleanliness.

Telling these conditions apart can be tricky, but a big hint lies in where the rash occurs: if it’s on your elbows, knees, or scalp, it’s more likely psoriasis, but if it’s on your feet, groin, or face, it’s more likely ringworm. Don’t hesitate to reach out to a dermatologist, who can give you a diagnosis and help create a treatment plan that will work for you. This is particularly important for psoriasis, which will require a lifetime of care.

What Conditions Can Mimic Eczema? 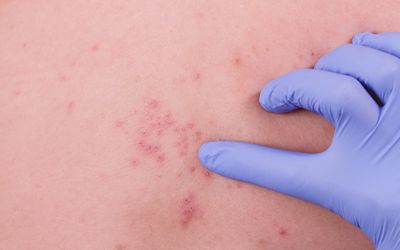 Nail Psoriasis vs. Fungus: What Are the Differences?

13 Causes of Red Spots on Skin 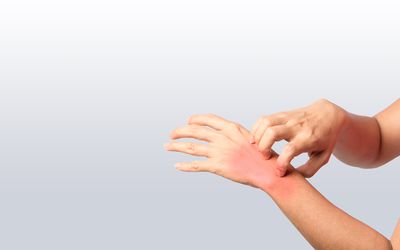 Can You Get Athlete’s Foot on Your Hands?

Why Does My Skin Itch? Most Common Causes