A term referring to lung-related conditions

The word pulmonary is used to describe issues pertaining to the lungs. It is derived from the Latin root word pulmo, which means lung. If someone has pulmonary disease, this means they have a lung disease, which may affect their ability to breathe well.

This article looks at pulmonary conditions, their diagnosis, and their treatment.

What Are Some Pulmonary Problems?

There are many conditions that are classified as pulmonary in nature. Some of the major ones include:

Pulmonary function tests (PFT) are performed to determine if an individual is experiencing problems with their lungs. These tests measure:

PFTs require you to blow into a small device called a spirometer and also may use a pulse oximeter attached to a finger. They can usually be performed in a clinic setting.

For some tests, you will have your normal breathing measured. For others, you may be required to exhale forcefully, or to attempt to empty your lungs of air. You may be given an inhaled medication after these tests, then perform the tests again to determine if the medication was effective.

If you already take breathing medications, you may be asked to skip your dose prior to having these tests to determine your baseline lung function.

Exercise testing is also done to test your lung function. This can include a six-minute walk test or cardiopulmonary exercise testing (CPET) done on a treadmill or exercise bike to get data on oxygen consumption, carbon dioxide production, and heart rate.

Pulmonary disease is often treated by a pulmonologist, a specialist in the treatment of lung and breathing issues ranging from asthma to chronic obstructive pulmonary disease to lung cancer. Pulmonologists do not perform lung surgeries, but they may perform lung procedures, such as a bronchoscopy, a procedure that allows a medical professional to visualize the inside of the lungs.

If surgery is needed, pulmonary problems are typically addressed by a cardiothoracic surgeon. This is a specialist who is trained in performing surgeries on the lungs as well as the heart, esophagus, and other chest organs.

Other conditions that are acute, such as a pulmonary embolism, may be treated by hospitalists, intensivists, or other physicians.

In medicine, "pulmonary" refers to conditions of the lungs. Some common pulmonary conditions include asthma, bronchitis, pneumonia, and sleep apnea.

Pulmonary conditions are usually diagnosed with pulmonary function tests. These tests measure airflow, lung volume, muscle function, and how well your lungs take in oxygen and breathe out carbon dioxide.

Pulmonary conditions are usually treated by a pulmonologist. Sugery on the lungs is usually performed by a cardiotoracic surgeon. 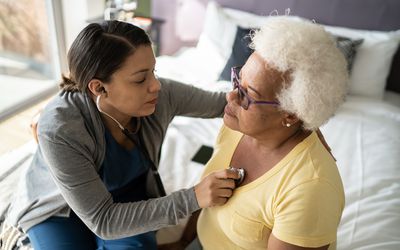