What Is Rheumatoid Arthritis?

Rheumatoid arthritis (RA) is an autoimmune, inflammatory disease that affects millions of people around the world. It is commonly believed that RA affects only the joints, but in reality, it is a systemic illness that can affect the whole body, from the skin to the heart and lungs and other areas.

In RA, the immune system mistakenly identifies its own tissue as "foreign invaders," and sets off an inflammatory response that leads to painful swelling of various organs and joints throughout the body.

While there is currently no cure for RA, there are many treatment options available that aim to decrease systemic inflammation and down-regulate the body's immune system. The most commonly used medications for RA are known as disease-modifying antirheumatic drugs (DMARDs), which can lead to decreased disease activity and sometimes even reversal of early joint damage.

Anemia is a condition in which the body has fewer red blood cells (RBCs) than it's supposed to. The role of RBCs, which are made in the bone marrow, is to carry oxygen throughout the entire body, nourishing organs and tissue, while also capturing carbon dioxide and transporting it back to the lungs for release.

Without adequate gas exchange occurring throughout the body, the following symptoms may develop:

Identifying the root cause of anemia is critical to selecting the right treatment plan. Various autoimmune illnesses, cancer, chronic infections, and chronic kidney diseases are just a few of the conditions that can cause anemia.

Figuring out why a person's red blood count is low will ultimately determine how to bring their numbers back up.

How Are Rheumatoid Arthritis and Anemia Connected?

It has long been known that inflammation can wreak havoc on the body, and this includes the way in which red blood cells are produced, stored, and ultimately destroyed.

While iron-deficiency anemia is the most common form of anemia in the world, in patients with RA, anemia of chronic disease is dominant.

Some forms of anemia associated with RA include:

How Are These Forms of Anemia Diagnosed?

Anemia is diagnosed by running a common blood test known as a complete blood count, or CBC.

In general, a CBC looks at white blood cell and red blood cell counts, hemoglobin and hematocrit counts, along with platelet values. It also looks at the size of RBCs, which can help differentiate different types of anemia.

If abnormalities are found on a CBC, additional labs can be ordered for further evaluation. These labs can include but are not limited to:

In addition to lab work, obtaining a thorough medical history and physical examination can help healthcare providers narrow down the cause of anemia.

How Are These Forms of Anemia Treated?

Treatment of anemia is very specific to the type of anemia present, so it is critical to get an accurate diagnosis.

In the case of anemia due to chronic disease, specifically to RA, decreased inflammatory activity throughout the body can help restore proper red blood cell counts. This can be achieved through:

Once inflammation decreases, anemia of chronic disease tends to stabilize or improve.

If someone has developed iron deficiency anemia due to an active bleed, it's important to identify the source of the bleed and take measures to stop it. Depending on lab values, over-the-counter iron supplements or even intravenous (IV) iron infusions may be necessary.

Anemia is commonly seen in people with rheumatoid arthritis. Anemia of chronic disease, iron deficiency anemia, and more rarely hemolytic anemia have all been associated with RA. Regular lab testing is useful in the initial diagnosis and further management of anemia. Treating the underlying cause can lead to stabilization or improvement.

If you have rheumatoid arthritis and have experienced symptoms of anemia, be sure to speak with your healthcare provider. Diagnosis tends to be minimally invasive, and the condition can be easily treated. The more information you have about your specific case of RA, the better your treatment plan can be tailored to you. 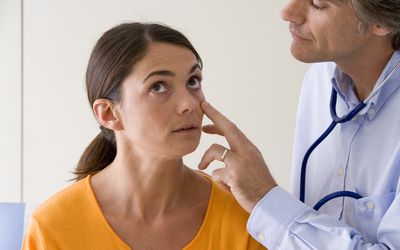