What's the Difference Between a DNA and RNA Vaccine?

On December 11, 2021 the Food and Drug Administration granted emergency use authorization for the messenger RNA (mRNA) vaccine for COVID‑19 co-developed by Pfizer and BioNTech. The emergency use vaccine is approved for people ages 5 and older.

This article explains what exactly mRNA vaccines are and how they work. It also discusses how RNA vaccines are different from another advancement in disease prevention—DNA vaccines—along with the pros and cons of each type.

What Are DNA and RNA Vaccines?

Traditional vaccines, which expose the body to proteins made by a virus or bacteria, are often made by using weakened or inactive versions of that virus or bacteria. That’s how popular vaccines, like the measles, mumps, and rubella (MMR) vaccine and pneumococcal vaccine, work.

When you get the MMR vaccine, for example, your body is introduced to weakened forms of the measles, mumps, and rubella viruses that do not cause disease. This triggers an immune response and causes your body to make antibodies like it would with a natural infection.

The antibodies in traditional vaccines like these help your body recognize and fight the virus should you be exposed to it later on, preventing you from getting sick.

A DNA or RNA vaccine has the same goal as traditional vaccines, but they work slightly differently. Instead of injecting a weakened form of a virus or bacteria into the body, DNA and RNA vaccines use part of the virus’ own genes to stimulate an immune response. In other words, they carry the genetic instructions for the host’s cells to make antigens.

“Both DNA and RNA vaccines deliver the message to the cell to create the desired protein so the immune system creates a response against this protein,” Angelica Cifuentes Kottkamp, MD, an infectious diseases doctor at NYU Langone’s Vaccine Center, tells Verywell. “[Then the body] is ready to fight it once it sees it again.”

Research published in 2019 in the medical journal Frontiers in Immunology reports that “preclinical and clinical trials have shown that mRNA vaccines provide a safe and long-lasting immune response in animal models and humans.”

“So far, there’s been no mass production of vaccines based on DNA or RNA,” Maria Gennaro, MD, a professor of medicine at the Rutgers New Jersey Medical School, tells Verywell. “So this is kind of new.”

Unlike traditional vaccines that contain a weak or inactive form of a virus, messenger RNA (mRNA) vaccines instruct cells in your body to build a protein similar to the virus. Your body responds to the protein with an immune response, which prepares your body to fight the actual virus if you encounter it.

The Difference Between DNA and RNA Vaccines

DNA and RNA vaccines work the same way as each other, but have some differences. With a DNA vaccine, the virus’ genetic information “is transmitted to another molecule that is called the messenger RNA (mRNA),” Gennaro says. This means with an RNA or mRNA vaccine, you’re one step ahead of a DNA vaccine.

Vaccines are evaluated for their effectiveness in what are called vaccine effectiveness studies. No vaccines are 100% effective in preventing disease. But data from these studies shows that the mRNA vaccines developed by Pfizer-BioNTech and Moderna reduce the risk of COVID-19 by 90% or more in people who are full vaccinated.

“The mRNA goes into the cell, and the cell translates it into proteins…which are the ones that the organism sees and induces the immune response,” Gennaro says.

Another difference between a DNA and RNA vaccine is that a DNA vaccine delivers the message via a small electrical pulse, which “literally pushes the message into the cell,” Cifuentes-Kottkamp says.

Ask an Infectious Disease Expert: What Can We Expect From a COVID-19 Vaccine?

Pros and Cons of DNA and RNA Vaccines

DNA and RNA vaccines are touted for their cost effectiveness and ability to be developed more quickly than traditional, protein vaccines.

Traditional vaccines often rely on actual viruses or viral proteins grown in eggs or cells, and can take years and years to develop. DNA and RNA vaccines, on the other hand, can be made more readily available because they rely on genetic code—not a live virus or bacteria. This also makes them cheaper to produce.

“The advantage over protein vaccines—in principle, not necessarily in practice—is that if you know what protein you want to end up expressing in the body, it’s very easy to synthesize a messenger RNA and then inject it into people,” Gennaro says. “Proteins are a little more finicky as molecules, whereas the nucleic acid [DNA and RNA] is a much simpler structure.”

But with any health advancement comes potential risk. Gennaro says that with a DNA vaccine, there is always a risk it can cause a permanent change to the cell’s natural DNA sequence.

“Usually, there are ways in which DNA vaccines are made that try to minimize this risk, but it’s a potential risk,” she says. “Instead, if you inject mRNA, it cannot get integrated into the genetic material of a cell. It is also ready to be translated into protein.”

Because no DNA vaccine is currently approved for human use, there is still much to learn about their effectiveness. With two mRNA vaccines approved for emergency use, they are much closer to full approval and licensing by the FDA.

DNA and RNA vaccines both instruct cells in your body to produce a protein that induces an immune response. Unlike RNA vaccines, DNA vaccines require an electrical impulse to push the genetic message into the cell. And while mRNA vaccines cannot affect your genes, this is a potential risk with DNA vaccines.

DNA and RNA vaccines contain genetic information that instructs cells in your body to produce a protein with a similar structure to that of the virus. This tricks your body into building an immune response to the protein that prepares your body to fight the real virus if you encounter it.

When COVID-19 hit, a tremendous amount of funding and attention poured into mRNA vaccine development. As a result, the highly effective mRNA COVID-19 vaccines became the first of their kind to gain FDA approval and authorization. Messenger RNA vaccines are an important, life-saving advancement that has opened the door to a promising new era in disease prevention. 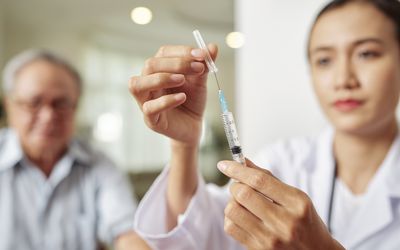