Conditions That Affect Your Scalp and How to Identify Them

There are many common types of scalp conditions that can cause some very irritating symptoms. Scalp conditions do not usually cause any major complications, and most are not contagious.

Conditions that the scalp is susceptible to include:

Many types of scalp conditions share similar symptoms—such as itching, inflammation, skin flaking, and more. Therefore, to receive proper treatment, it’s vital to consult with an experienced healthcare provider—such as a dermatologist— for a thorough examination and proper diagnosis.

Common types of scalp conditions are listed below.

Androgenetic alopecia is a common hair loss condition seen in men as well as in women. In fact, the condition affects 30% to 50% of men by age 50.

Androgenetic alopecia is commonly known as male-pattern baldness because the hair loss usually occurs in a specific pattern—beginning above the temples and forming a characteristic M shape.

In women, the hair loss pattern differs; it involves thin hair that is distributed over the entire head and the hairline doesn’t usually recede as it does in men. Women with androgenic alopecia rarely become bald, but rather, develop thinning of the hair.

There are two medical treatments for androgenic alopecia that have been approved by the U.S. Food and Drug Administration (FDA), including:

Studies have shown a sustained effect of long-term use of topical minoxidil in promoting hair growth.

Psoriasis is an autoimmune disorder that tends to run in families. It is a chronic (long-term) inflammatory condition that involves periods of remission (when symptoms go away) and relapse.

Half of those with psoriasis will have scalp involvement.

In psoriasis, rapid cell growth results in thick, white, or red plaques, covered with silver-gray scales, itching, scalp lesions (similar to those in seborrheic dermatitis), and progression of symptoms, starting with dandruff-like flakes.

Scalp psoriasis is known to be difficult to treat. Treatment can include:

Severe scalp psoriasis may require systemic (involving the entire body) treatment using antipsoriatic treatment modalities. Systemic medications for psoriasis include those such as cyclosporine or methotrexate.

The prognosis (outcome) of psoriasis treatment depends on many factors, such as:

A 2021 study found that there was a favorable prognosis in 48% of those with a type of psoriasis called guttate-onset psoriasis.

Guttate-onset psoriasis is characterized by small, round, raised papules that may be scaly. The study also found that 20% of the study participants with plaque-onset psoriasis had minimal disease activity without treatment at 10 years.

Folliculitis is an inflammation of the hair follicles located on any part of the body (including the scalp), but more commonly, it occurs in the beard, arms, back, buttocks and legs.

Hair follicles are very tiny pouches of skin in which hairs grow and sebum (oil on the scalp or skin) is produced.

Folliculitis may be caused by several types of organisms including:

The symptoms start as a reddened, painful, burning, or itchy area at or near one or more hair strands. It appears like red pimples, with a strand of hair in the center, that may have pus inside.

Treatment for mild folliculitis may involve home remedies such as warm compresses to help alleviate itching and promote the removal of pus.

For severe or deep folliculitis oral (by mouth) antibiotics or antifungal agents are usually prescribed.

Mild folliculitis usually heals without treatment in approximately two weeks. When folliculitis is severe, oral antibiotics or antifungal medication will most often resolve the infection.

Alopecia areata is an autoimmune skin disease, that causes hair loss on the scalp, face, and other areas of the body.

The condition affects 6.8 million people in the United States. The body’s immune system attacks the hair follicles, causing them to shrink in size and dramatically slow down the growth of hair, so much that hair may completely stop growing. There may be a cycle of hair loss that involves unpredictable regrowth and loss of hair, over and over.

Treatment of alopecia areata depends on:

In those with mild forms of the disease—involving less than 50% hair loss—treatment may involve interventions to prevent the immune systems’ attack on the hair follicle.

For more severe conditions—with over 50% hair loss on the scalp or other areas—oral and injectable medications (including JAK inhibitor treatment) may be prescribed.

Medications for the treatment of alopecia areata don’t work for every person with the condition. It’s important to consult with your healthcare provider about the risks and benefits of the medications.

Ringworm is a fungal infection involving the scalp’s outer layer. Symptoms involve a rash that is comprised of circular patches with raised, red edges.

The rash spreads from the edges with the inside of the circle being unaffected. This gives the rash a ring-shaped appearance.

Unlike many scalp conditions, ringworm is contagious, it can be spread by touching a person (or an animal) that has ringworm, or by sharing personal items such as hats, combs, brushes clothing, or towels.

Ringworm can be treated with a special, antifungal shampoo or prescription medication, such as griseofulvin (Grifulvin V, Gris-PEG), terbinafine, and itraconazole.

Be sure to wash your hands before and after using topical medication to prevent spreading ringworm to other parts of your body. Because ringworm is so contagious, everyone in the house will need to use antifungal shampoo.

It may take more time to treat ringworm scalp conditions, than when it appears on the skin.

It’s important to follow the dermatologist’s recommendation and finish all medications, as well as keeping follow-up appointments to ensure ringworm is resolved.

Eczema includes several skin disorders that affect the scalp and other areas of the body including the scalp, face, neck, and creases of the knees and elbows.

It tends to run in families but can occur out of the blue, for no known reason. Eczema can be caused by an allergic reaction as well. Symptoms include:

The goal of eczema treatment is to alleviate symptoms and control the rash. The exact treatment modality depends on the type of eczema and other factors.

Treatment may include preventative measures (such as washing the hair with a gentle shampoo with no harsh chemicals) or the use of a medicated shampoo.

Sometimes scalp eczema can clear up without treatment, but most often it lasts for many years with periods of flare-ups and remissions. Treatment is usually aimed at controlling symptoms such as pruritus (itchiness) and scales.

Seborrheic dermatitis, also called seborrhea, is a type of eczema; it is considered a long-term inflammatory disorder, commonly found in areas of the body where there are a lot of oil glands, such as the scalp.

Seborrheic dermatitis manifests with symptoms of red rash, and greasy, yellow crusts on the scalp or other parts of the body.

In babies, seborrheic dermatitis is known as cradle cap.

Treatment of seborrheic dermatitis is aimed at helping to decrease visible signs of the disorder and reduce symptoms (such as itching).

Over-the-counter medicated shampoos and topical (on the scalp) antifungal medications as well as calcineurin inhibitors and steroids may be ordered.

Seborrheic dermatitis is not a curable disorder. Because it is chronic (long-term), ongoing maintenance treatment is usually necessary to stave off symptoms.

Lichen planus is thought to be an uncommon autoimmune disease. The condition is an inflammatory skin condition that may cause itchy, small patches of hair loss on the scalp, called scarring alopecia.

Other scalp symptoms include redness, irritation, and small bumps on the scalp.

Bright red painful areas may occur in the genitals. The condition may have periods of flare-ups and remissions that are triggered by stress, fatigue, and other factors.

Treatment of lichen planus aims to relieve symptoms (such as itching or pain) with medicated creams or prescription medication.

If a person does not have any discomfort associated with the disease, treatment may not be necessary.

Topical (on the skin) numbing agents can be given to alleviate pain and corticosteroids can lower inflammation and alleviate itching. Other treatment modalities may include antihistamines to relieve itching, or a type of ultraviolet light called PUVA.

The symptoms of lichen planus usually go away on their own without treatment, but it may persist for a long time, perhaps even years.

Head lice is a condition caused by very small insects that cause itching and small red bumps on the neck, shoulders, and scalp.

The lice are not easily seen (because they are so small) but their eggs, which are called nits, can be easily detected in the hair.

The nits are round or oval-shaped globs that look like dandruff, tightly attached to the hair near the scalp. The nits cannot easily be removed.

Treatment of lice involves shampooing the hair with medicated shampoo to kill the lice, then picking out the nits with a special comb.

Head lice is a very contagious condition, so all members of the family may need to use the medicated shampoo. Avoid sharing personal items such as hats, combs, and towels.

How Head Lice Is Treated

Many scalp conditions can be diagnosed during a history and physical examination. The diagnostician can examine the scalp and gather information on the history of symptoms and oftentimes make a diagnosis.

But many of the symptoms of scalp conditions overlap.

Sometimes diagnostic tests need to be done. A dermatologist may be consulted when the healthcare provider is differentiating between several possible diagnoses. A scalp condition diagnosis may include: 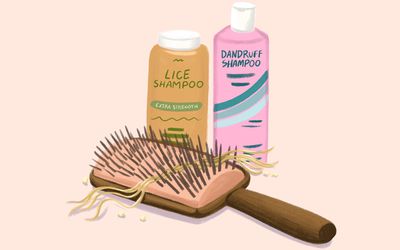 Telling the Difference Between Lice and Dandruff 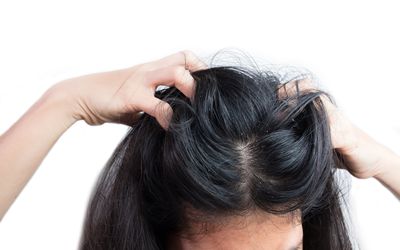 How an Itchy Scalp Is Treated 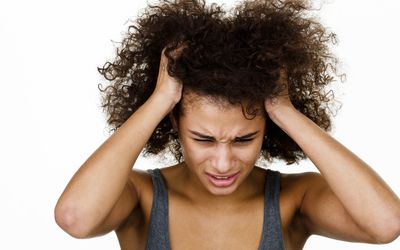 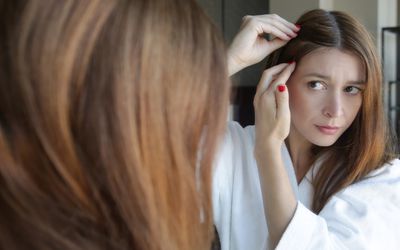 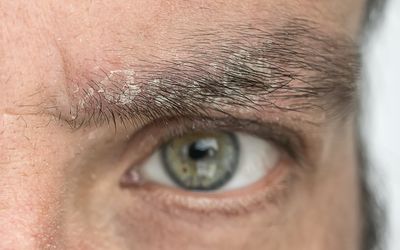 What Is Eyebrow Dandruff? 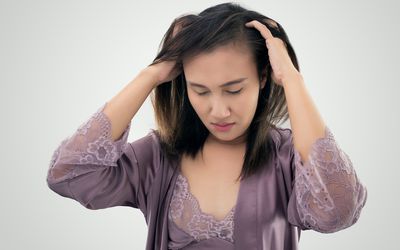 Itchy Scalp at Night? What You Need to Know 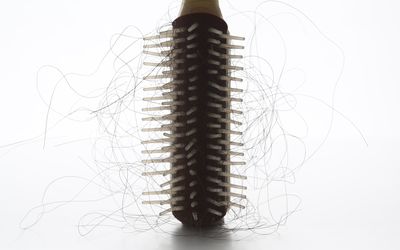 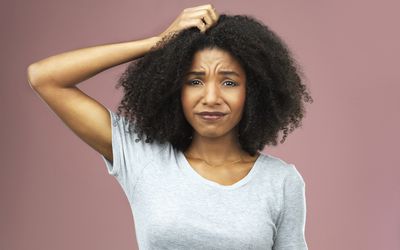 Sebum Buildup on the Scalp: Causes and Treatment 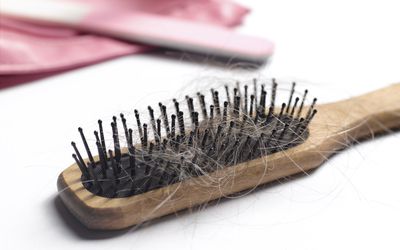 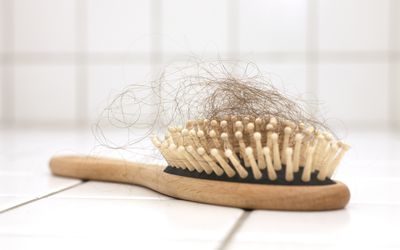 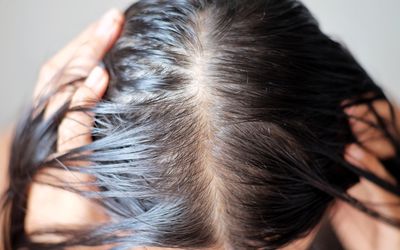 What Could Cause a Tingling Sensation In My Head and Scalp?