Adrienne Dellwo
Adrienne Dellwo is an experienced journalist who was diagnosed with fibromyalgia and has written extensively on the topic.
Learn about our editorial process
Medically reviewed by Diana Apetauerova, MD

Of all the treatments for fibromyalgia (FMS) and chronic fatigue syndrome (ME/CFS), antidepressants may be the hardest for people to understand. It's common for people to be confused about why these medications are prescribed for conditions other than depression.

The two types of antidepressants that are shown to be most effective against symptoms of FMS are:

What Are SSRIs and SNRIs?

Serotonin and norepinephrine are both neurotransmitters—chemicals in the brain that transmit messages from one neuron (brain cell) to another. Each deals with multiple functions.

Serotonin's functions include pain processing and regulation of the sleep cycle. Your brain uses serotonin to create melatonin, which helps you get to sleep.

Norepinephrine is involved with the body's stress response, alertness, and memory.

Abnormalities in serotonin and norepinephrine are believed to be related to some cases of FMS and ME/CFS. SSRIs/SNRIs make more of them available by slowing down reuptake, which is when they're absorbed back into the nerve cell after use.

Other SNRIs are on the market and may be prescribed off-label for these illnesses. They include:

SSRIs, which are also sometimes prescribed off-label, include:

SSRIs, SNRIs, and other medications that increase serotonin can lead to a potentially deadly condition called serotonin syndrome. The risk increases when you take more than one serotonin-increasing substance, which can include prescription medications, recreational drugs, and even certain supplements.

To lower your risk of serotonin syndrome, it's important for you to tell your healthcare provider and pharmacist about everything you're taking.

SSRIs, SNRIs, and all other antidepressants are mandated by the FDA to carry a black-box warning–-the agency's most serious alert–-about an increased risk of suicidal thoughts or behaviors in those under 25.

It's important for anyone taking these drugs to be aware of the risk, and it's also important for friends and family members to know about it. They may be the ones who spot the warning signs. If you find yourself having suicidal thoughts, get help right away. Here are two hotlines you can call:

You should also talk to your healthcare provider about these thoughts and what the best course of action is.

Going off of SSRIs/SNRIs carries its own risks. Stopping too quickly can cause what's called discontinuation syndrome, so you should talk to your healthcare provider about the correct way to gradually wean yourself off of the drug.

Symptoms of discontinuation syndrome include:

Discontinuation symptoms can range from minor to debilitating. Because many of these symptoms are also common in FMS and ME/CFS, you could mistake them for symptoms of your illness that are increasing as you wean off of the medication. Contact your healthcare provider if you have any concerns.

These drugs come with a long list of potential side effects. Some of the more dangerous ones include seizure, hallucination and out-of-control actions.﻿﻿

SSRIs/SNRIs can interact negatively with drugs other than those that increase serotonin. These may include anti-inflammatories (NSAIDs), blood thinners, and several others.﻿﻿

Side effects and interactions vary by drug. To check on specific drugs, you can look them up at Drugs.com or RxList.com. They're also generally available in packaging information.

The best way for you to reduce the risks associated with SSRIs/SNRIs is to carefully follow your healthcare provider's and pharmacist's instructions for both dosage and weaning. In case of emergency, you may also want to keep a list of your medications in your wallet.

It can help to print out lists of possible side effects and keep them somewhere visible, especially when you start a new medication. That way, you'll be able to quickly see whether new symptoms you're experiencing may be tied to the drug.

The decision to take SSRIs or SNRIs is best made by you and your healthcare provider while considering your diagnoses, symptoms, overall health, and lifestyle factors.

You may need to try several drugs in this class before you find one that works well for you and that you can tolerate. This can take a lot of time. Be sure to keep the lines of communication with your healthcare provider open during this process. 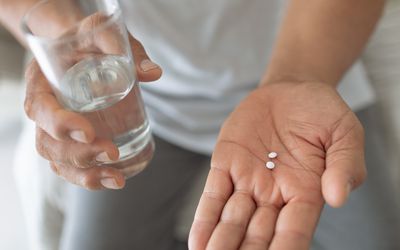