A stroke is a potentially life-threatening brain condition that occurs when an artery leading to or within the brain is blocked or ruptured. This causes a lack of oxygen and nutrients reaching the brain tissue. Long-term health effects of a stroke can include behavioral changes, memory loss, trouble speaking or understanding, and hearing issues.

Stroke is the leading cause of long-term disability in the United States. One type of stroke that can lead to long-term health effects is temporal lobe stroke.

This article discusses the causes and long-term effects of a temporal lobe stroke.

The brain is an extremely complex organ that controls many of the body's core functions. It gets its blood supply from several different blood vessels that follow a 'map' to provide oxygen and nutrient-rich blood to specific regions.

The regions of the brain each have specific functions, including physical movement, sensation, speech, thinking skills, emotions—just about everything the body does. If a stroke occurs and blood can't reach a specific region of the brain, then the particular function controlled by that part of the brain won't work as it should.

A stroke can produce a variety of symptoms that correspond to which part of the brain is affected. The main regions of the brain include the brainstem, the cerebellum, and the four lobes on each side (frontal lobes, temporal lobes, parietal lobes, and occipital lobes).

A stroke occurs when blood flow to a region of the brain is interrupted. When that happens, part of the brain cannot get the oxygen and nutrients it needs, which ultimately causes damage to that area of the brain.

A stroke can be caused either by a blood clot obstructing the flow of blood to the brain (​ischemic stroke) or by a blood vessel leaking or rupturing and preventing blood flow to the brain (hemorrhagic stroke). A TIA (transient ischemic attack), or "mini-stroke," is caused by a temporary interruption in blood flow that resolves without causing permanent damage.​​

There are numerous effects of a temporal lobe stroke, ranging from difficulty speaking to hearing loss to much more.

A temporal lobe stroke often causes a type of speech problem called Wernicke's aphasia, which is characterized by trouble making sense of spoken language. It can also include:

The temporal lobe is the main region of the brain that controls the sensation of hearing. Usually, hearing loss is mild after one temporal lobe is affected by a stroke. But when both temporal lobes are affected the result might be complete deafness. This is very rare. Other hearing-related effects include:

Not all strokes can cause seizures, but temporal lobe strokes are among the stroke types most closely associated with stroke-induced seizures and post-stroke epilepsy.

Other rare long-term effects of a temporal lobe stroke can include: 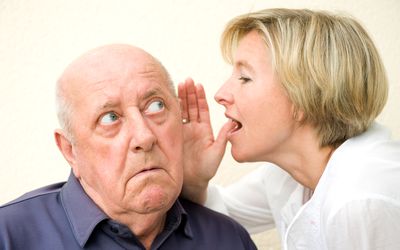