The Connection Between IBD and Psoriasis

People who have inflammatory bowel disease (IBD) also sometimes develop other diseases or conditions that are called extra-intestinal manifestations (or sometimes EIMs). Skin conditions are fairly common in people with IBD, and one that tends to occur frequently both in the general population and in people with IBD is psoriasis. Many people may think of psoriasis as a rash, but it's actually a systemic condition and may share the same inflammatory pathway as Crohn's disease. Because the two conditions might be caused by a problem in the functioning of the immune system, they are often treated by some of the same medications. For people with IBD who also have psoriasis, both conditions may be a factor when choosing treatments.

There are a variety of effective treatments for psoriasis already available and more are currently being developed. People who have both psoriasis and IBD will want to seek care from a dermatologist that has experience with patients with IBD and will work closely with the gastroenterologist.

Psoriasis is a systemic disease that causes a raised, scaly rash on the skin﻿﻿ . The rash can appear on any part of the body, but most frequently shows up on the elbows, knees, and scalp but can also be found on the legs, nails, and trunk. The most common type of psoriasis is called plaque psoriasis and the plaques can cause itchiness or burning. Psoriasis goes through periods of flare-ups and remission. In most cases, psoriasis is treated with topical creams.

How Common Is Psoriasis in People With IBD?

IBD is considered an immune-mediated condition. It's not uncommon for people who have one immune-mediated disease to develop another one. IBD and psoriasis are both conditions that have an unknown cause (called an idiopathic disease) and result in inflammation.

In recent years researchers are uncovering more about the connection between IBD and psoriatic diseases. Psoriasis in the general population only runs at approximately 2% to 3% but for people with IBD, it tends to be higher. Studies show that people with Crohn's disease and ulcerative colitis may develop psoriasis at a rate of approximately 13%.﻿﻿

As researchers discover more about the inflammatory pathways of IBD and psoriasis, some overlap between the two diseases is being uncovered﻿﻿ . Crohn's disease and psoriasis are both considered Th1 mediated conditions. Th1 is a helper cell that mounts an inflammatory response when the body is invaded by a foreign substance such as a parasite, bacteria, or virus. Ulcerative colitis is considered a Th2-like mediated condition. Th2 cells are activated when there is a bacteria, allergic response, or toxin present. As the role of these T cells is better understood in regards to the development of IBD and psoriasis, it could lead to the creation of more effective treatments for these diseases.

Does Having Psoriasis Increase the Risk of Developing IBD?

There are only a few studies that looked into the risk of IBD in people who have been diagnosed with psoriasis. They have shown conflicting results: Some have shown an increased risk of IBD in those that have psoriasis and others have shown the opposite. Additionally, the methods that were used in these studies were not without their drawbacks, which makes the conclusions more difficult to stand by.

At present, it's not known exactly what the risk is, but there does seem to be a trend towards people with psoriasis having an increased risk of developing Crohn's disease. The same might not be true for ulcerative colitis: There is less evidence that people with psoriasis might be at an increased risk of developing ulcerative colitis, or the effect might be less than it is for Crohn's disease.

Because psoriasis is a systemic disease, medications that are given orally or by injection may also be used. In some cases, the medications approved to treat psoriasis are also given to treat one or more forms of IBD, including methotrexate, cyclosporine, and some biologics:

Evidence is mounting that psoriasis and IBD tend to occur together more frequently than thought in previous decades. It's still not clear if having psoriasis makes it more likely that a person will also develop a form of IBD. In some cases, the medications used to treat IBD are also used to treat psoriasis. Most cases of psoriasis are considered mild to moderate and might be treated with light therapy or topical medications. For more severe cases of psoriasis, where 5% to 10% or more of the body is affected, oral medications or biologics might also be used. Just as with IBD, it is important to continue treatment for psoriasis in order to prevent flare-ups. There are many new treatments for psoriasis currently under study, and the future for treatment of psoriasis is bright. 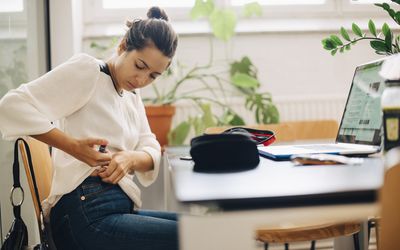 An Overview of Biologics for Treating Psoriatic Disease