Many people who have been diagnosed with chronic obstructive pulmonary disease (COPD) wonder what the difference is between the two main subtypes of the disease, chronic bronchitis and emphysema. Chronic bronchitis affects the airways, while emphysema affects the air sacs. And while that sounds distinct enough, both can cause difficulty breathing, and the two conditions usually coexist.

Learning more about their distinctive symptoms and underlying causes can help you better understand how chronic bronchitis and emphysema differ.

As both conditions affect the lungs, both chronic bronchitis and emphysema are marked by similar symptoms of shortness of breath and wheezing,﻿﻿ but there are some differences, particularly in the late stages of the diseases.

This irritation causes an increased amount of heavy mucus in the lungs that, over time, interferes with breathing. The body responds to this mucus by producing a cough in an attempt to clear the airways.

Because the mucus (also referred to as phlegm or sputum) is so abundant and thick, it's often difficult for a person with chronic bronchitis to expel it. This is why they may experience a cough every day for an extended period of time. This differentiates the condition from acute bronchitis.

Additionally, large amounts of thick mucus make the lungs a perfect habitat for bacteria to thrive. For this reason, bacterial lung infections among people who have chronic bronchitis are common and frequent.

As both conditions affect the lungs, both chronic bronchitis and emphysema are marked by similar symptoms of shortness of breath and wheezing, Left untreated, both conditions may result in a lack of oxygen in the blood stream, and bluish discoloration of the skin, nails, and lips, called cyanosisDecreased oxygen can also damage the heart and lead to swelling in the legs and ankles (peripheral edema. There are some differences, however, particularly in the late stages of the diseases.

Emphysema refers to the damage and destruction done to the walls of the alveoli, the tiny air spaces in the lungs where oxygen and carbon dioxide are exchanged during the breathing process. The alveoli provide oxygen to the bloodstream so when they are destroyed, it is difficult for the person with emphysema to breathe.

Emphysema also causes the lungs to gradually lose their elasticity. The lack of oxygen combined with the build-up of carbon dioxide can cause irreparable damage.

According to the Centers for Disease Control and Prevention (CDC), the number of adults living with chronic bronchitis continues to grow in the U.S. with numbers now exceeding 15 million.

The risk of emphysema is associated with the duration of smoking and the number of cigarettes smoked each day. Non-smokers can also develop emphysema if regularly exposed to secondhand smoke. Statistics from the CDC show that 3.8 million Americans have been diagnosed with emphysema.

The Health Risks of Secondhand Smoke

Regardless, the diagnosis of either chronic bronchitis or emphysema requires a thorough medical history, physical examination, and a simple breath test called spirometry, which measures how well your lungs are functioning. Spirometry can be performed in your healthcare provider's office and is noninvasive; it only requires you to breathe into a mouthpiece.

While there is no cure yet for emphysema or chronic bronchitis, there are scientifically proven treatment options that can help slow the progression of the disease and the reduction of symptoms. Treatment may involve oral drugs, inhaled medications, and surgery.﻿﻿

Lifestyle changes are also central to treatment. Chief among these is the cessation of smoking, either by going cold turkey or using smoking aids.﻿﻿ Without the complete termination of cigarettes, there is little way to either slow the disease or reduce the severity of illness.

By kicking the habit, exercising regularly, losing weight, and using the appropriate medications, you can significantly reduce COPD symptoms and increase both your lifespan and quality of life.

Even though both types of COPD are usually progressive, meaning they often get worse over time, the good news is that there are therapies like inhalers, oxygen, and pulmonary rehabilitation that can improve your quality of life. In addition, you can also be proactive in your care by not smoking and ensuring you are up to date on your flu and pneumonia vaccines. Talk to your healthcare provider about finding a care plan that works for you. 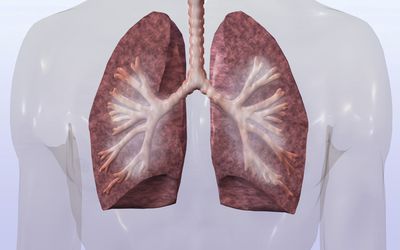