The Link Between HIV/AIDS and Blood Cancers

Karen Raymaakers
Karen Raymaakers RN, CON(C) is a certified oncology nurse that has worked with leukemia and lymphoma patients for over a decade.
Learn about our editorial process
Medically reviewed by Latesha Elopre, MD, MSPH

For many years, researchers have known that suppression of the immune system has been associated with cancer. Patients who receive drugs to lower their immune system following organ transplant, for example, may have a risk of developing cancer that is hundreds of times higher than the rest of the population. Therefore, it is no surprise that the human immunodeficiency virus (HIV) or acquired immune deficiency syndrome (AIDS)—which also causes a major impairment in the immune system—is associated with an increased risk of cancer as well.﻿﻿

In addition to a number of "solid tumor" cancers, HIV is considered a risk factor in blood cancers. In fact, non Hodgkin lymphoma (NHL) is the second most common cancer in HIV patients.﻿﻿ Less commonly, Hodgkin lymphoma, leukemia, and myeloma are also linked to HIV.﻿﻿

The Risk of Cancer for HIV Patients

Since the development of highly active antiretroviral therapies (HAART), HIV patients are living much longer.﻿﻿ The downside to this positive news is that they are living longer with a decreased immune system that allows the opportunity for cancer to develop. In the past, it has been estimated that as many as 40% of HIV/AIDS patients may develop an AIDS-related cancer.﻿﻿

In the early days of the AIDS epidemic, certain types of lymphoma occurred thousands of times more frequently in HIV patients than in the rest of the population. Since the introduction of HAART in 1996, these rates have decreased significantly but infection with the HIV continues to be a risk factor for NHL. Study results are unclear as to the effect that HAART has had on the rates of Hodgkin lymphoma.﻿﻿

The risk of NHL is the same across all HIV populations, regardless of how the disease was contracted.

Types of Lymphoma Linked to HIV

Most AIDS-related lymphomas are B cell NHL. HIV chronically stimulates B-cells, increases their rate of reproduction, and activates them.

Primary CNS lymphoma, which originates in the brain, accounts for almost half of all AIDS-related lymphoma. Most AIDS-related NHL is “extranodal,” which means that the disease is found in places outside of the lymph system. The most common places where NHL is located in this population are the gastrointestinal system, liver, heart, lungs, skin, and bone marrow.

Can Lymphoma Be Prevented?

Not entirely, but patients on HAART treatment will have a reduced risk of developing HIV-related blood cancers.﻿﻿ Still, knowledge and awareness about the signs and symptoms of the most common sites of lymphoma is important if you have HIV or AIDS.

Healthcare providers of HIV-infected people should be prompt in investigating concerns about these types of symptoms. Diagnosing the cancer and beginning therapy early can give the best chance for treatment success.

Most people with AIDS-related lymphoma will experience the same general symptoms as any other lymphoma patient:

Because AIDS-related lymphoma is often found outside the lymph system, symptoms may also be specific to where the cancer is located. For example, signs of lymphoma in the brain may include seizures, weakness or decreased sensations, confusion, or headache. Lymphoma in the gastrointestinal system can lead to vague abdominal pain or blood in the vomit or bowel movements.

Like lymphoma in other people, lymphoma in AIDS patients is usually treated with radiation, chemotherapy, or both.﻿﻿ The challenge, however, is that most of these patients have bone marrow suppression and low immunity before their treatment even begins. As a result, they are at a greater risk of contracting a life-threatening infection during their treatment. In addition, it is believed that the immune suppression caused by chemotherapy may actually accelerate HIV disease.

Research continues on how to overcome these challenges. Different combinations of low dose chemotherapy regimens, targeted therapies, stem cell transplant, as well as adding chemotherapy to HAART are being studied on an ongoing basis.﻿﻿ Patients with AIDS-related cancer may choose to participate in some of this research through clinical trials.

People who are infected with HIV are at an increased risk of developing cancer, including Hodgkin lymphoma, myeloma, and more commonly, NHL. It is important for HIV/AIDS patients to be aware of the signs and symptoms of lymphoma so that early treatment can be initiated. 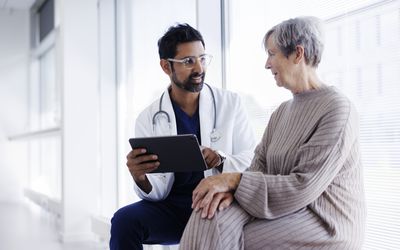 Lymphedema and the Cancer Connection