It is generally accepted that having a sexually transmitted disease (STD) increases a person's risk of getting HIV, both for biological and behavioral reasons.

According to research, STDs like syphilis and gonorrhea cause physical changes that make the HIV virus have easier access to vulnerable cells and tissues of the body, STD co-infection also increases the infectivity of the person with HIV—making them more likely to transmit the virus to others.

STDs can increase HIV susceptibility in a number of ways:

Prime among the concerns are STDs like infective syphilis, gonorrhea, and herpes (HSV), with evidence that chlamydia can also increase HIV risk in women.

STD Statistics in the U.S.

According to the Centers for Disease Control and Prevention (CDC), nearly 20 million new STD infections occur every year, accounting for almost $16 billion in healthcare costs.

Three diseases make up the bulk of the infections:

Anyone who is sexually active could be at risk of becoming infected with an STD.

To this end, If you are a sexually active gay or bisexual man, you should be tested for syphilis, chlamydia, gonorrhea, and HIV at least once a year. More frequent STD testing, between every three to six months, is recommended for gay or bisexual men at high risk, especially those who have multiple sex partners, use recreational drugs, or practice condomless sex.

Benefits of STD Screening and Treatment

Many sexually transmitted infections do not cause symptoms in the early stages, so you can get it or give it to your partner without realizing it.

If you have an STD diagnosis, you should receive treatment as soon as possible—to both treat the infection and potentially decrease the risk of HIV transmission.

According to the latest research, HIV-positive people on STD therapy tend to shed far less HIV and to shed the virus less frequently than those not on treatment. Shedding is the state where HIV is present in semen, vaginal secretions, blood, or breast milk even when a person has an undetectable HIV viral load.

Additionally, safer sex counseling can help a person uninfected with HIV or another STD to identify their personal risk factors and find ways to better reduce their risk of these infections.

Even if a person is on the HIV prevention pill (PrEP) or is taking full-time antiretroviral therapy, STDs can increase the risk of HIV transmission, putting yourself or others at risk.

It is, therefore, important to remember the following take-home points:

The Best At-Home STD Tests
6 Sources
Verywell Health uses only high-quality sources, including peer-reviewed studies, to support the facts within our articles. Read our editorial process to learn more about how we fact-check and keep our content accurate, reliable, and trustworthy.
Additional Reading 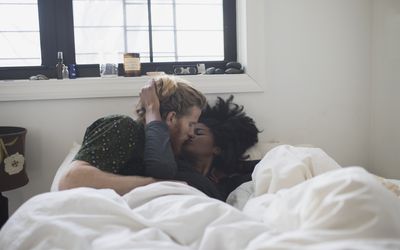 What Is the Risk of HIV From Vaginal Sex?
Sexually Transmitted Disease (STD) Symptoms in Women