It release hormones that regulate metabolism

Brain H. Wetchler, DO, is a board-certified internal medicine physician. He works in private practice at Woodmere Medical Associates in New York.

The thyroid gland is part of the endocrine system (along with the adrenal glands, hypothalamus, pituitary, ovaries, and testes). The thyroid gland releases hormones into the bloodstream to control your metabolism, which is the primary way your body uses energy. In addition to metabolism, the hormones it releases also help with processes like bone growth, brain development, heart rate, digestion, muscle functioning, body temperature, menstrual cycles, and more. The thyroid can also produce more hormones when needed, such as to help increase body temperature or when a woman is pregnant. Hashimoto’s disease and Graves’ disease are causes of abnormal hormone production.

The thyroid gland is located in the front of the neck, right below the larynx and next to and around to the trachea. It’s a butterfly shape due to the gland consisting of two lobes that are connected by a piece of tissue called the isthmus. Each lobe is filled with follicles that contain hormones the body needs to function. Two capsules surround the thyroid gland—an outer layer that connects to the voice box muscles and surrounding nerves, and one in between this layer and the thyroid gland that allows the thyroid to move when swallowing or talking.﻿﻿

There are a number of variations the thyroid gland can take on, and this may affect how the thyroid operates and what disorders arise because of these differences. In a study of 52 male cadavers and 18 females, 9.6% of the males and 5.6% of females were missing the isthmus in their thyroid gland.

In certain cases, the thyroid gland can become enlarged (known as a condition called goiter) or develop clumps of cells called thyroid nodules, which are often benign but can sometimes indicate thyroid cancer.

One of the most important elements behind producing thyroid hormones is iodine, which we get a majority of through food or supplements. Both T3 and T4 need iodine in order to be produced by the thyroid gland. Once iodine makes its way to the thyroid it gets converted into T3 and T4. These are then released into the bloodstream to help with multiple functions like increasing the metabolic rate in the body, growth, brain development, and more. Some of the highest dietary sources of iodine include cheese, cow’s milk, eggs, saltwater fish, soy milk, and yogurt.

Depending on whether or not a thyroid gland is overactive or not producing enough hormones, some disorders can stem from this. Common thyroid diseases include:

Your healthcare provider can conduct a series of blood tests to determine if you may have a thyroid disorder, in addition to seeing how well your thyroid gland is functioning. These include:

In addition to these blood tests, an ultrasound, thyroid scan, or radioactive iodine uptake test can be done to check thyroid function and find the exact cause behind a hyperthyroidism or hypothyroidism diagnosis as well as examining any nodules or abnormalities on the thyroid gland. Getting bloodwork is always the first step and will help your healthcare provider decide if further testing is needed. 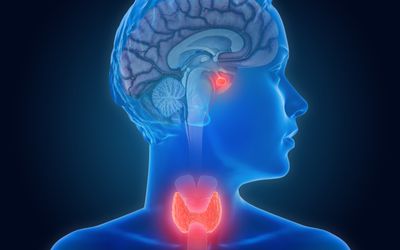 What Is Thyroid Stimulating Hormone?