Menorrhagia—heavy or prolonged menstrual bleeding—can be caused by a number of medical issues, including fibroids, uterine polyps, perimenopause, and other factors.

This article discusses the symptoms and causes of menorrhagia. It defines normal and heavy periods. It also explains when you should talk to your gynecologist and when emergency medical care may be required.

Signs You're Losing Too Much Blood During Period

A typical period lasts four or five days. During that time, an individual sheds 2 to 3 tablespoons of blood. Those with menorrhagia can lose twice as much blood each month.

The following indicate menorrhagia. These are signs that you're losing too much blood during your period and should see a healthcare provider:

When Menstrual Bleeding Is an Emergency

Go to the nearest emergency room if you experience severe, acute bleeding in which you soak through four or more pads or tampons in a two-hour period.﻿﻿﻿ If you are pregnant, seek immediate medical care if you have any menstrual bleeding.

There are a number of different causes of heavy menstrual bleeding—including benign (noncancerous) growths, like fibroids, or malignant growths, like cancer of the uterus or cervix. Hormone changes or blood clotting disorders can cause menorrhagia too.

Other less common causes of heavy menstrual bleeding include endometriosis and having an intrauterine device (IUD) like the ParaGard, which may cause excessive bleeding, especially during your first year of use.

But the list does not stop there. That's why it's important to see a healthcare provider for a proper diagnosis and evaluation.

The most common cause of heavy menstrual bleeding is ovulatory dysfunction during adolescence or perimenopause. During this time, ovulation (releasing an egg) can be irregular—which means it might not happen every month. This can lead to thickening of the endometrium (uterine lining) and heavy periods.

Oral contraceptives can usually regulate your bleeding during adolescence, and hormone therapy can help during menopause.

Beyond the normal hormonal changes that occur with puberty or menopause, hormonally-induced ovulatory dysfunction can also occur with hypothyroidism, polycystic ovary syndrome (PCOS), and premature ovarian insufficiency. Getting treated for your underlying problem is important, and it can help restore regular ovulation and normalize your periods.

Fibroids are growths that develop from the muscle of the uterus, usually between ages 30 to 49.

If your symptoms are not severe or troublesome, you might not need treatment for your fibroids—it's often sufficient to take a “wait and see” approach. During menopause, fibroids typically shrink and disappear without treatment.

Progestin-releasing intrauterine devices (IUDs) can decrease menstrual bleeding but do not reduce fibroid size. Injectable gonadotropin-releasing hormone agonists can decrease the size but can only be used for a short time due to their side effects.

Endometrial ablation (in which the lining of the uterus is destroyed) is a procedure that can be used for the treatment of small fibroids. Surgical options include myomectomy (removal of the fibroid) and uterine artery embolization (which cuts off the blood supply to the fibroid).

In the most severe cases, a hysterectomy may be warranted, in which the whole uterus is removed, with or without the ovaries.

Endometrial polyps are typically noncancerous, grape-like growths that protrude from the lining of the uterus. They can develop before and after menopause. The cause of endometrial polyps is unclear, though research suggests a link between hormone therapy and obesity.

Treatment of small polyps is unnecessary unless you're at risk of uterine cancer. If you are, your healthcare provider might recommend a polypectomy, in which the polyp would be removed for microscopic examination. Large polyps are routinely removed and examined as a precaution.

Uterine adenomyosis is a condition in which the endometrial uterine cells grow into the muscular wall of the uterus, causing uterine enlargement and painful, heavy bleeding. Hormonal birth control methods can help control the condition, and the definitive treatment for adenomyosis is a hysterectomy.

PID is most often caused by an untreated sexually transmitted infection (STI), however, it can sometimes occur following childbirth, abortion, or other gynecological procedures. In PID, one or more reproductive organs can be infected—including the uterus, fallopian tubes, and/or cervix. The recommended treatment for PID is antibiotic therapy.

Cervical cancer, which can be caused by human papillomavirus (HPV) (an asymptomatic STI), can invade other parts of the body. Treatment for cervical cancer includes surgery, chemotherapy, and/or radiation therapy.

Treatment for endometrial cancer is usually a hysterectomy, possibly followed by chemotherapy and/or radiation treatments.

Early diagnosis is key to the effective treatment of cancer. In addition to regular Pap screening for cervical cancer, the American Cancer Society recommends that women at high risk of endometrial cancer have an annual endometrial biopsy.

Other bleeding issues that can lead to heavy menstrual bleeding include having a low platelet count (platelets are involved in the clotting process and are produced in the bone marrow) or taking a blood thinner like aspirin or Coumadin (warfarin sodium).

It's important that you get a diagnosis for the cause of your heavy menstrual bleeding. Before your appointment, try to jot down your period pattern in the last few months.

For instance, how many days did you bleed each month? How many pads or tampons do you go through on the days of your heaviest menstrual flow?

Make sure you have a list of all your medications, including hormonal birth control, hormone therapy, and any vitamins or over-the-counter supplements.

Your healthcare provider may also do a hysteroscopy, a diagnostic procedure used to visualize the inside of your uterus. They may also do an endometrial biopsy to sample your uterine tissue for microscopic examination.

Getting to the bottom of your heavy menstrual bleeding is important for your quality of life and for your overall health. Heavy blood loss, regardless of the cause, can cause iron-deficiency anemia, which can make you short of breath, tired, and dizzy.

Once both the bleeding and the root cause of your bleeding are addressed and treated, you can move forward and feel well—you deserve it. 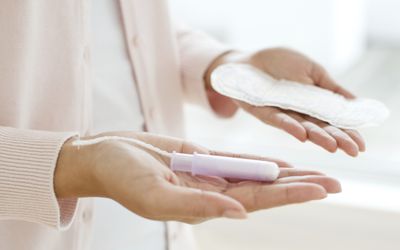