Turmeric, the spice that's ground from the root of the Curcuma longa plant that gives curry its bright yellow color, may help relieve joint pain and inflammation associated with osteoarthritis (OA) and rheumatoid arthritis (RA).

Used for centuries in Ayurvedic medicine to treat arthritis, modern research has isolated the antioxidant curcumin as the key beneficial component in turmeric. A 2016 meta-analysis of research suggested that curcumin may relieve pain, as well as non-steroidal anti-inflammatory drugs (NSAIDs) in people with RA or OA.

A relative of ginger, turmeric is a powerful anti-inflammatory that blocks cytokines and enzymes involved in the inflammation process.

Due to the lack of substantial supporting research, the National Center for Complementary and Integrative Health advises against using turmeric supplements to prevent or treat any health condition, including osteoarthritis and rheumatoid arthritis. And it should not be used as a replacement for disease-modifying anti-rheumatic drug (DMARD) therapy, which is the standard of care for these conditions.

There has been some research examining the effects of turmeric on arthritis.

In laboratory studies, curcumin was shown to inhibit mediators of the inflammatory response. These include pro-inflammatory pathways such as nuclear factor-kappa B (NF-κB), mitogen-activated protein kinase (MAPK), and Janus kinase (JAK)/signal transducer.

Curcumin appears to target the immune system using similar pathways as some DMARDs.

Human studies investigating the effect of curcumin or turmeric in the treatment of RA are limited but show promise.

The most common form of arthritis, osteoarthritis is a condition that leads to the breakdown of joint cartilage and bone. Turmeric shows promise in treating the pain associated with OA.

Turmeric and curcumin appear to help reduce pain and stiffness of OA by suppressing the production of COX-2, a therapeutic target of the NSAIDs Celebrex (celecoxib) and Bextra (valdecoxib), although other undiscovered pathways may also be involved.

Current research on the effects of curcumin in the treatment of osteoarthritis suggests that the spice offers the following benefits:

How Osteoarthritis Is Treated

Turmeric is generally regarded as safe by the U.S. Food and Drug Administration (FDA) when used as a food additive.

In larger, therapeutic doses, turmeric and curcumin may cause side effects, including:

Of note, using turmeric or curcumin supplements can result in temporary body odor and strong-scented urine.

Widely available in the spice aisle of your local grocery store, it may be difficult to get therapeutic amounts of curcumin through cooking. Curcumin makes up only a small part of turmeric and can be difficult to absorb. In addition, turmeric can be high in lead and lead to lead poisoning if taken in large doses.

Taking therapeutic doses of curcumin or turmeric is not recommended for people with certain conditions:

Certain drugs can interact negatively with curcumin supplements. Curcumin may thin your blood and should not be used in conjunction with anti-coagulant or anti-platelet medications, including:

Curcumin supplements are often combined with piperine (the active ingredient in black pepper), which may interact negatively with the following:

If you are considering using turmeric supplements, talk to your healthcare provider first to discuss whether it's appropriate for you. This is especially important if you have a chronic condition or are taking any medications. If you have surgery scheduled, you may need to stop taking curcumin prior to your procedure. Speak to your surgical team for instructions.

In clinical studies, the effective daily dose for the treatment of both OA and RA is about 1,000 mg of curcumin a day, commonly taken as one 500 mg capsule twice a day.

Unless otherwise directed by your healthcare provider, follow the dosing instructions provided by the supplement manufacturer.

Curcumin is sold in capsule and powder forms at health food stores, drug stores, and online.

Curcumin is poorly absorbed by the body when it is taken in any form. To boost absorption, choose supplement brands that use phospholipids, antioxidants, or nanoparticles, or contain piperine. According to a review of research published in the journal Foods, piperine has been found to increase the absorption of curcumin by up to 2,000%.

Dietary supplements are not regulated by the FDA. Some products may have additives and contaminants that may not be listed on the label, such as fillers, food coloring, and heavy metals such as lead. Look for a well-known and well-respected supplement brand that adheres to standards set by ConsumerLabs, The U.S. Pharmacopeial Convention, or NSF International.

Turmeric May Be a Solution For Osteoarthritis Knee Pain, Study Finds
11 Sources
Verywell Health uses only high-quality sources, including peer-reviewed studies, to support the facts within our articles. Read our editorial process to learn more about how we fact-check and keep our content accurate, reliable, and trustworthy. 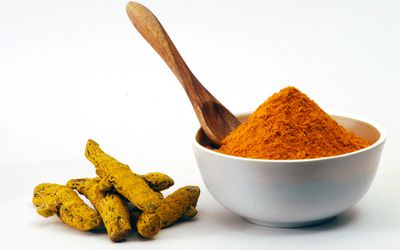 Ankylosing Spondylitis vs. Osteoarthritis: What Are the Differences?
Mud Bath Therapy for Arthritis